The Bible and the mailman 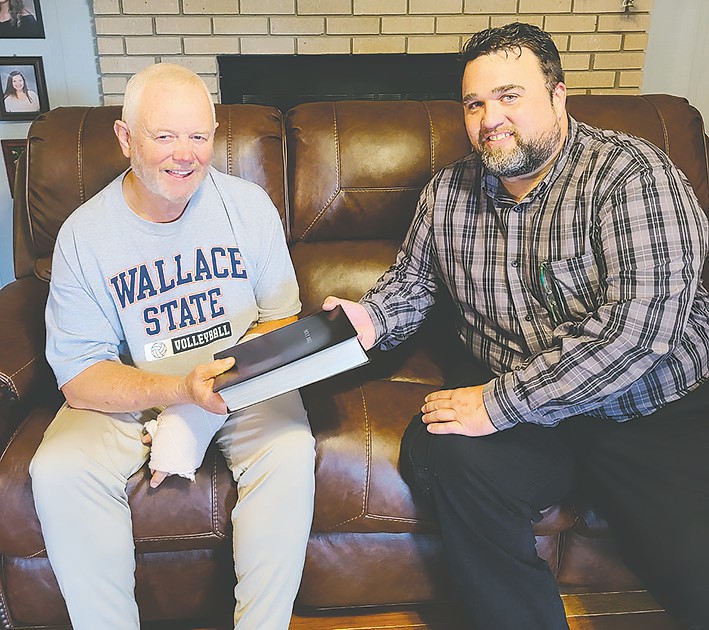 Whether you call it divine intervention, luck, or being at the right place at the right time, a Hayden man is alive today because of the quick actions of his postman.

On Tuesday, Oct. 6, Bert Swann was at home alone and working on his tractor in the shop. His wife Rhonda had left to pick up their granddaughter from school. It was 2:15 p.m., and because the mail usually arrives around noon each day, she stopped to check the mailbox. She was expecting a package as she had been notified by email that morning of its arrival that day.

When she stopped and checked the mailbox, there was no mail or package and she thought to herself “Aw, he’s running late.” Little did she know that the delay in the mail service that afternoon would be one for which she would be eternally grateful.

Swann was making some adjustments to a piece of equipment when the angle grinder he was using ripped through his flesh and cut a main artery in his left forearm just above his wrist. Swann knew the injury was bad, and it would be a few minutes before Rhonda would return home. Swann said he didn’t have any help. His phone was in the house, and no one would hear his cries for help. Other than being on his knees and talking to the Lord, he knew he needed to take action.

Getting back inside the house to call for help seemed to be the best option for Swann. He was able to make the 100-foot journey to the back door and entered the kitchen area. But, after noticing how much of a mess the blood was making, he chose to go back outside.

His next thought was to go around and enter through the front door and get his phone. With the blood still gushing out of the artery, that plan was not as easy as it sounds. Swann was having difficulty traveling up the two stairs that entered the front of the house.

Swann was now unable to stand up. He resorted to trying to crawl up the steps, but began to feel hopeless because every time he would lift his head, Swann felt like he was losing consciousness.

Little did Swann know that help was just seconds away, as mailman Anthony Alexander was coming down the driveway to deliver the package scheduled to arrive that day. Alexander found Swann and immediately took action.

Without hesitation, he called Blount County 911, Rhonda, and a nearby business operated by family friends for help. Alexander also used a plastic bag to keep Swann from bleeding out any more than he already had. While Alexander was on the phone with 911, Swann lost consciousness and fell back. Alexander was scared at that point as he thought it was the end for Swann.

As fate would have it, all Blount County ambulances were zeroed out on other calls, and there was not one available to respond to Swann’s home. Cullman County ambulance service heard the call go out and responded. Within 15 minutes of the call going out, they were on the scene.

Despite already running late that afternoon, Alexander stayed and assisted paramedics, family friends, and the sheriff’s deputy until Swann’s wife and the ambulance arrived. His first priority at that moment was offering any help he could in an attempt to save Swann’s life. He told Rhonda that when he first saw Swann lying on the front steps, he thought Swann was painting them red before realizing it was not paint, but blood.

Thankfully Swann was stabilized enough to be transported by ambulance to the UAB Trauma Unit. Rhonda was not able to enter the hospital due to COVID-19 restrictions, but she is thankful for hospital chaplain Katie Smith who acted as a liaison between the trauma team and Rhonda.

Swann continues with the recovery process and has begun therapy. On Monday, the initial outer bandages were changed, but the pressure bandage had to remain in place. The Swanns are unsure how many stitches it took to repair the mangled skin, but they were told his injury appeared to be doing well so far.

Swann can now laugh at his pain, but he, too, thought his life was in jeopardy. Swann said he did not sleep well the first night, as he kept dreaming about the accident, and it was those thoughts that caused him to wake up several times.

To Alexander, the help he was able to provide had a special meaning. Swann is the same age as his father, and Alexander lost his dad three years ago to a heart attack. His father had no one to help him that fateful day. Although he doesn’t know if someone being there would have made any difference in his father’s condition, Alexander believes that he was giving something back by helping Swann.

The Swanns have known Alexander and his family for years. They were connected several ways including when Alexander was a student at the school where Rhonda was a PE aide and by his father being the Swanns’ heating and air technician. They remember the sudden death of Alexander’s father.

While Swann thanks God for Alexander coming along at the right time to help him, both men say it was more than just luck that Alexander was two hours later than usual that day. Oh, and the package Swann was delivering… it was a Bible that Rhonda had ordered more than two weeks ago. She said Alexander is a wonderful mailman as he tries to deliver any packages they have directly to them.

Rhonda is not only grateful to all of those that helped save her husband’s life, she is also thankful for their family friends, the Adams family, who went in and cleaned up the Swann home before they arrived back there. When they arrived back to a cleaned home much later that night, Rhonda noticed the Bible package lying on the floor where Alexander had put it when Swann was being helped.

Swann’s daughter Josslyn said, “Had it not been for the Bible and the mailman Anthony Alexander, Bert Swann Jr. would not be here with us today.”