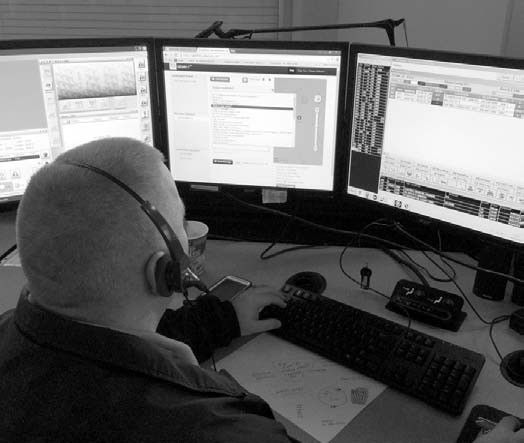 Shane Hobson, operator at the Blount County 911 center, mans the console where text messages from Verizon and TMobile cellphones can now be received. Messages appear on the second screen from the left.

A new text message feature allows for emergency messages from Verizon and T-Mobile subscribers to be sent directly to 911 in situations where a spoken phone call would be inadvisable or even dangerous – for example, someone in a hostage situation texting unobtrusively to report the event and location, or a person texting to report an intruder in the house without attracting attention. Preset response messages – requesting the texter’s location, for example – can be sent quickly at the touch of a button.

‘We prefer a voice call to a text just because you can get more information faster,’ said 911 Center director Caleb Branch. ‘But this gives people another capability to communicate when they can’t call. So, call if you can, but if you can’t, by all means, text,’ he said.

Branch said he expects that text capability with the two other major cellphone carriers – AT&T and Sprint – will probably be added by the end of the month. Blount County is the third center in central Alabama to be text capable and the sixth in the state. The initial test of the service was completed Monday, using a provocative test text message,‘This is a test.’