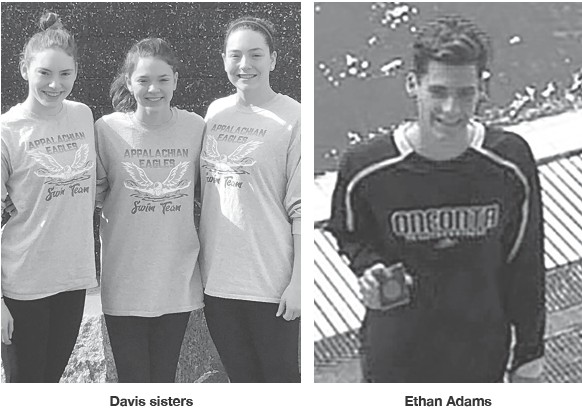 Oneonta junior Ethan Adams, who has been a competitive swimmer for six years, placed third in the state 1A–5A 100-meter freestyle event.

Adams also competed in the state 100-meter backstroke and placed fifth. This is Adams’s third trip to the state finals. He trains at Gadsden’s YMCA.

Adams’ mother, Mary Ashley Adams, said, “Many people do not realize that swimming is a year-round sport. It requires a lot of discipline and practice.”

Adams is the son of Patrick and Mary Ashley Adams.

Two other swimmers from OHS, Anna Liz Miller and Anna Chappelle, are to be commended for also making it to the state competition. They vied for a position in the final heat on Dec. 1; however, their times failed to qualify for the final eight.

Samantha Davis, a junior from Appalachian, along with her sisters, Danielle and Elizabeth, also traveled to the state high school competition.

Samantha placed second in the 100- meter backstroke at the state finals.

Danielle and Elizabeth had an impressive year but, unfortunately, did not earn a spot in the final heat.

Swimming has been a part of these girl’s lives starting at age 5. They swim and train with the Blount-Oneonta Aquatics and have competed with that team for many years.

The girls began competing at the AHSAA sectional and state meets in 2015, becoming the first Appalachian High School swim team.

AHS swim coach Kristin Clark said, “Swimming is highly competitive, and to even make it to state is a huge accomplishment.

“For Samantha, finally being able to represent her school and stand on the podium to receive her medal was a goal she has been working towards for a long time.

“She is a leader in her school and community and is a fierce competitor in the water. We are looking forward to seeing where her senior year takes her as she plans to continue her swimming career into college.”

Howard and Sharon Davis are the proud parents of Danielle, Elizabeth, and Samantha.