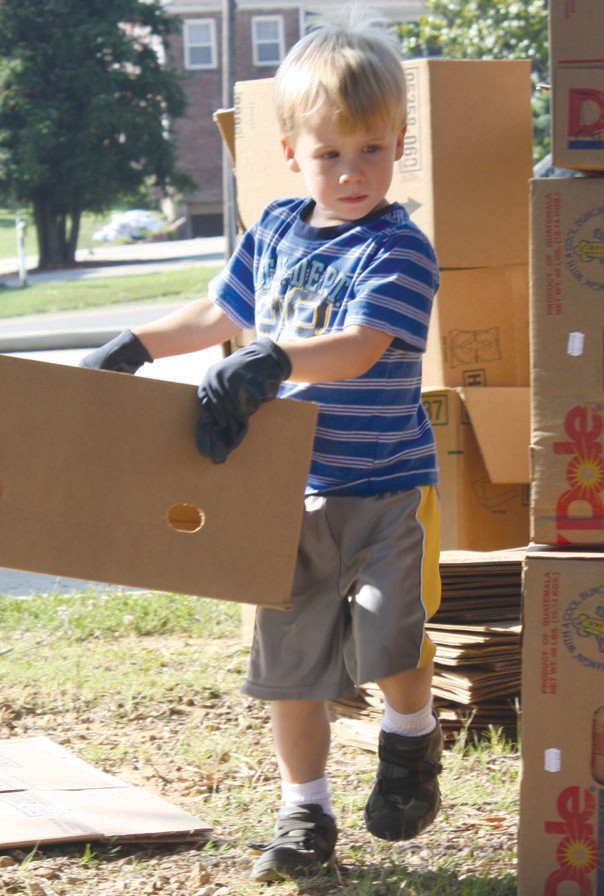 Henry Lanier, age 4, was one of the youngest volunteers at the potato drop.

Sweet potato casseroles may not be popular in May, but plans to cook the dish were discussed at Lester Memorial Methodist Church last Wednesday.

After a North Carolina farmer donated 6.3 million pounds of sweet potatoes to the Society of St. Andrew, an e-mail was sent out asking churches to host potato drops for the hungry.

Lester Memorial Methodist Church replied and was the drop site of a 43,000-pound load of sweet potatoes.

Volunteers of all ages gathered in the church parking lot to help unload, bag, and reload the potatoes. Hometown Market donated 1000 grocery bags for the drop, and the bins were unloaded with help from Birdsong Industries which provided the forklift and forklift operator . 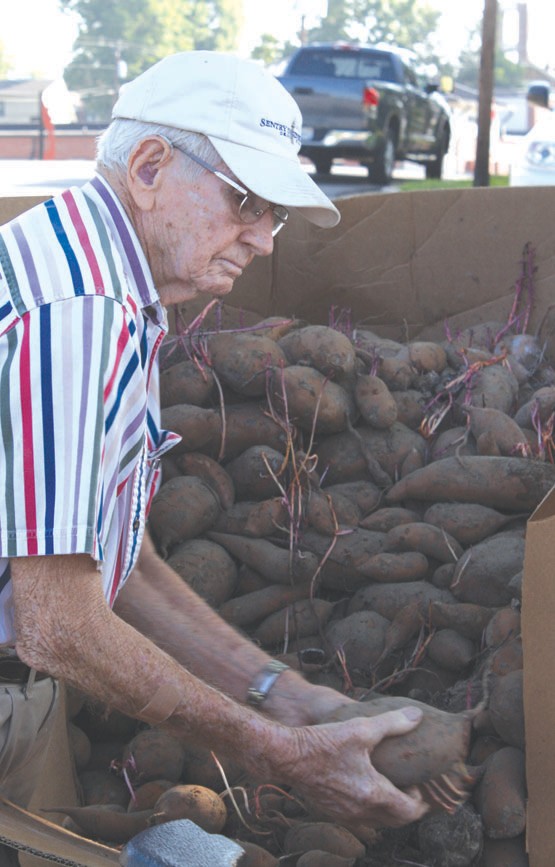 Ed Cowden of Palmerdale tosses the sweet potatoes onto the bed of a truck for other volunteers to bag them.

Ken Colvin from Palmerdale United Methodist said after they picked up their 2000-pound bin of potatoes they were traveling back to their town to give them away immediately and also put them in storage to hand out later.

“We give every two weeks to a food pantry,” Colvin said. “We serve over 100 families a month, and this will just be an addition to what we give out.”

All 22 bins, weighing 2000 pounds each, were given away, a few food banks even accepted full bins. Additional to the food banks, senior citizen centers, nonprofit organizations, and more came to the church to get their fair share of the vegetables.

“We just gave potatoes to all kinds of people,” said Marla Smith, missions team coordinator for Lester Memorial Church. Smith said many people were also picking up potatoes for the neighbors and friends.

According to The Society of Saint Andrew’s website, endhunger.org, each year the organization, through the Potato and Produce Project, distributes more than 10 million pounds of fruits and vegetables, and since the program’s beginning Alabama has received more than 13 millions pounds of food for the needy.

The website said, “This has resulted in approximately 40 million servings of food going for Alabama’s hungry.”

Smith said she viewed this as a great opportunity to help their community, and was pleased with the number of volunteers who came to help out.

“I’m sure there were at least 40 volunteers and that part was great,” Smith said. “Everybody was helpful, it went really well and we’ll do it again.”