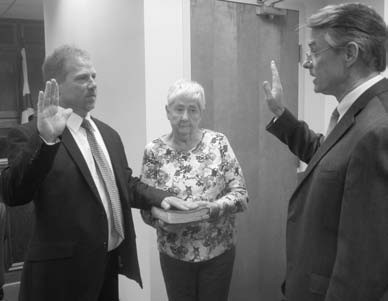 Swearing in of re-elected commissioners. Dean Calvert (left) is sworn in to his second term by Commission Chairman Chris Green, with his mother, Sue Calvert, assisting. Allen Armstrong likewise begins his second term, assisted by his wife, Selene, with District Judge Sherry Burns officiating. The ceremony was the first item on the agenda for Wednesday’s commission business meeting.

In what could be a significant step toward resolving a chronic problem with maintaining Blount County rural roads, county attorney Jeff Sherrer recommended filing a request with the Circuit Court for a declaratory judgement to establish the legal width of a prescriptive right-of-way on Heaton Road, located in District 3 on Straight Mountain off U.S. 231, about six miles east of Oneonta. 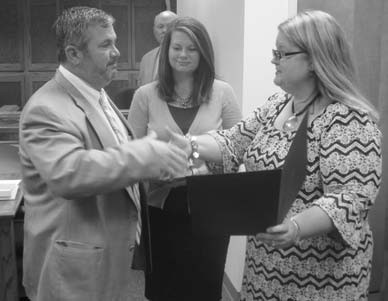 Narrow rights-of-way prescribing legal road width as the existing distance between ditches – as little as 10 feet in some instances – has long bedeviled attempts by county commissioners to widen and upgrade public roads to adequate width to support traffic which may have increased dramatically since the roads were designated years ago as public roads. A favorable ruling could begin to solve the prescriptive right-of-way problem throughout the county.

“We’re not taking action against the property owner in any way,” Commission Chairman Chris Green said,“but this matter of inadequate rights-of-way for public safety must be resolved.”

No damages are requested, Sherrer said. The request is simply for the judge to delineate the rights of the two parties. An attempt was made to resolve the issue through negotiation with the property owner, but that effort failed, he said.

Among commission announcements at the end of the meeting included several of significance.

• A state Community Development Block Grant of $350,000 was awarded to extend public water to Huffstutler Road, Frost Road, and Frost Drive in District 3. The required grant match will be paid by the Oneonta Utilities Board and by the Snead Utilities Board, water authorities serving the affected areas.

• The commission office has received confirmation of a $30,000 grant from the Land and Water Conservation Fund for Palisades Park. The money will be used to acquire an additional 20 acres for the park.

• A long-term lease agreement for a fire tower and several additional acres at Palisades Park has been finalized.

• The December commission business meeting will be at the regular time Monday, Dec. 8, at 9 a.m. in the commission boardroom at the courthouse.

• The work session preceding the business meeting will be held Tuesday, Dec. 2, at 9 a.m. at the same place. The normal meeting time of the work session was changed to accommodate an Association of County Commissions of Alabama seminar scheduled for Dec. 4, which would have been the normal work session date.

• The first annual stakeholder meeting of the Blount County Economic Development Council will be held Dec. 4 at 6 p.m. at the dining room at St. Vincent’s Blount. The public may attend.

• A public hearing will be held at the beginning of the commission business meeting on Dec. 8. The purpose is to present the updated and reformatted 10-year Blount County Solid Waste Plan.

• rejected the bid for replacement of Moss Bridge as being beyond acceptable parameters, and authorized rebid.

• adopted the road conditions policy recommend by the Association of County Commissions of Alabama: if roads are deemed too hazardous to travel, they are to be declared “impassable” in public notifications; they should not be declared “closed,” unless they are actually barricaded to prevent public access.

• added Dec. 26 to the Christmas holiday schedule, consistent with the Governor’s declaration closing state offices on the day; the courthouse will not be open for business Dec. 26.

• extended the commission’s current schedule of monthly meetings for the 2015 calendar year; the business meeting is set at its traditional time on the second Monday of the month at 9 a.m.; the monthly work session meets at 9 a.m. on the Thursday preceding the monthly business meeting; times may be changed as necessary by public notice.

• adopted a resolution recognizing Mike Criswell upon his retirement for his 26 years of meritorious service as circuit clerk.

• approved a proclamation designating the week of Nov. 30 to Dec. 6, 2014, as Childhood Cancer Awareness Week in Blount County.

• approved memoranda of understanding between the commission and participating municipalities for debris removal covering the period Nov. 1, 2014, to Oct. 31, 2015; formal agreements must be in place for municipalities to receive favorable cost breaks under the county contract.

• declared surplus a Massey Ferguson tractor and a 1998 Ford truck for District 4 and authorized their sale.

All commissioners and the commission chairman were present at the business meeting.