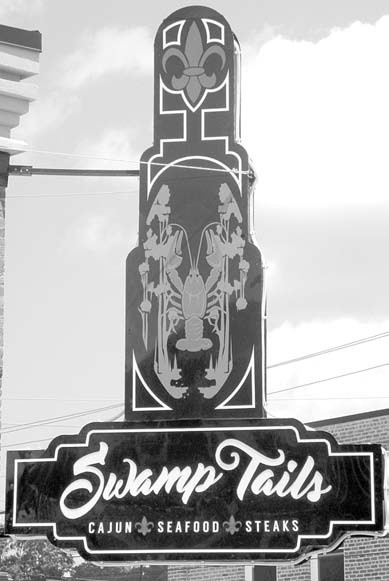 Believe it or not. This is, by popular request, the former McCurry’s Furniture sign – one of a number of touches owners have incorporated into the design of their new flagship restaurant as a result of ideas expressed by local residents during construction.

And stage it, it will. It will be a major downtown event from 11 a.m. to 11 p.m., featuring an actual stage in the middle of the street in front of the restaurant with live entertainment by a country/southern rock band from 4 p.m. to 10 p.m. Tables and chairs will be arrayed around the stage for people to dine outside during the afternoon, and while enjoying the entertainment after 4 p.m.

That block of downtown will be barricaded that morning to give day-long traffic-free access for the festival-like event. The restaurant will serve lunch, then will keep on serving through the afternoon and evening, with ordering from a special menu for outside.

It’s a little early to be projecting detailed hours of operation, so here’s the general schedule for now: it’ll be dinner (4:30 p.m. to 11 p.m.) only Tuesday through Friday, and lunch and dinner (11 a.m. to 11 p.m.) Saturdays – until further notice. The future plan includes opening for lunch on some weekdays, but timing and days are yet to be decided.

It’s hard to get a restaurateur to tell you what the restaurant’s specialty – the best dish on the menu – is (everything is equally sensational, they say) – but it can be done. Here are the results, achieved without the necessity of torture. Appetizers: They’re all great (had to agree to this caveat, in order to get a recommendation), but – don’t miss the Boudreaux’s Boudin Balls. As an alternate, the Shrimp and Crawfish Dip is considered absolutely over the top for both taste and authenticity. Entrees: Snapper in the Swamp and Po-Man’s Crab Cakes – a perfect tie with the other three seafood dishes and all the steak offerings, insists co-owner and menu guru Toby Hollier (pronounced O-yea).

Two menu adjustments already, by order of management: side salads have be upgraded, as has the the Top Sirloin (from 8 oz. to 10 oz.) – the sirloin not for being not good enough, but for being not thick enough. Now it’s both thicker and gooder, if that’s possible (grammatically incorrect though it be).

Vision, from interviews with owners

• want people to feel they are in a typical seafood restaurant in south Louisiana, in a comfortable, appealing atmosphere

• want Swamp Tails to be not just a restaurant, but a destination; want it to be one of main reasons people come to Oneonta.

• there’s not a restaurant in the surrounding counties, including Jefferson, like this restaurant is going to be; it’s not there yet, but that’s where we’re going with it.

• a five-star restaurant in downtown Oneonta – that’s the vision.

The following quote was crafted by the three owners in response to the question, “Describe the efforts you have made to create an authentic atmosphere and top-notch dining experience here,” then edited down to the paragraphs printed here.

“Turning this 100-plus-year-old building into a destination that makes people feel like they are in one of south Louisiana’s finest restaurants was the real challenge. We spent countless hours reclaiming the lumber we removed (from the old McCurry’s building) and used it throughout the interior, including all the table and bar tops. All the brick replaced or added came from the original building. We even used the old sign, with a few necessary changes, of course. With a touch of south Louisiana decor, a mixture of Cajun, country, and Southern rock playing in the background (at the grand opening), and over-the-top service we know that Oneonta and all of Blount County will be as proud of Swamp Tails as we are.

“As to the food, we know it’s great. The Holliers and Bennetts are south Louisiana natives. We rarely order something from local restaurants that has the word ‘Cajun’ in the description. To most people, Cajun style means really spicy. Cajun dishes are spicy, but just because it’s hot doesn’t make it Cajun. Seasoning means more than cayenne pepper or Tabasco sauce. Whether it is sautéed vegetables as a base, boiled homemade seafood stock, a perfect mixture of seasonings, nearly burning flour and oil to make a roux, or some combination thereof, we’re certain you will leave the Swamp with a better understanding of the phrase ‘authentic Cajun cuisine.’

• Under items you know, but need to be reminded of: Swamp Tails is not a fast food joint. Don’t expect it to operate on your stopwatch. Items are not precooked but prepared elaborately and individually, according to your order. The wait time target is 30 minutes from the time you order until you get your meal, and in time it may be somewhat less than that, but remember, what you’re paying for is the ultimate in quality, taste, and service – not pure speed, no matter what.

• Features include a full bar, serving beer, wine, and mixed drinks inside the restaurant.

• The Watering Hole is a nook enclosed on three sides and opening onto the sidewalk on the fourth, where you can order a drink and sit and relax while you wait for your table to be called. The combination of cozy space and iron grill work setting it off from the sidewalk gives it a definite sense of being… well… a good place to be.