At Cypress House Theater
Could Oneonta Mardi Gras parade and ball be next big thing? 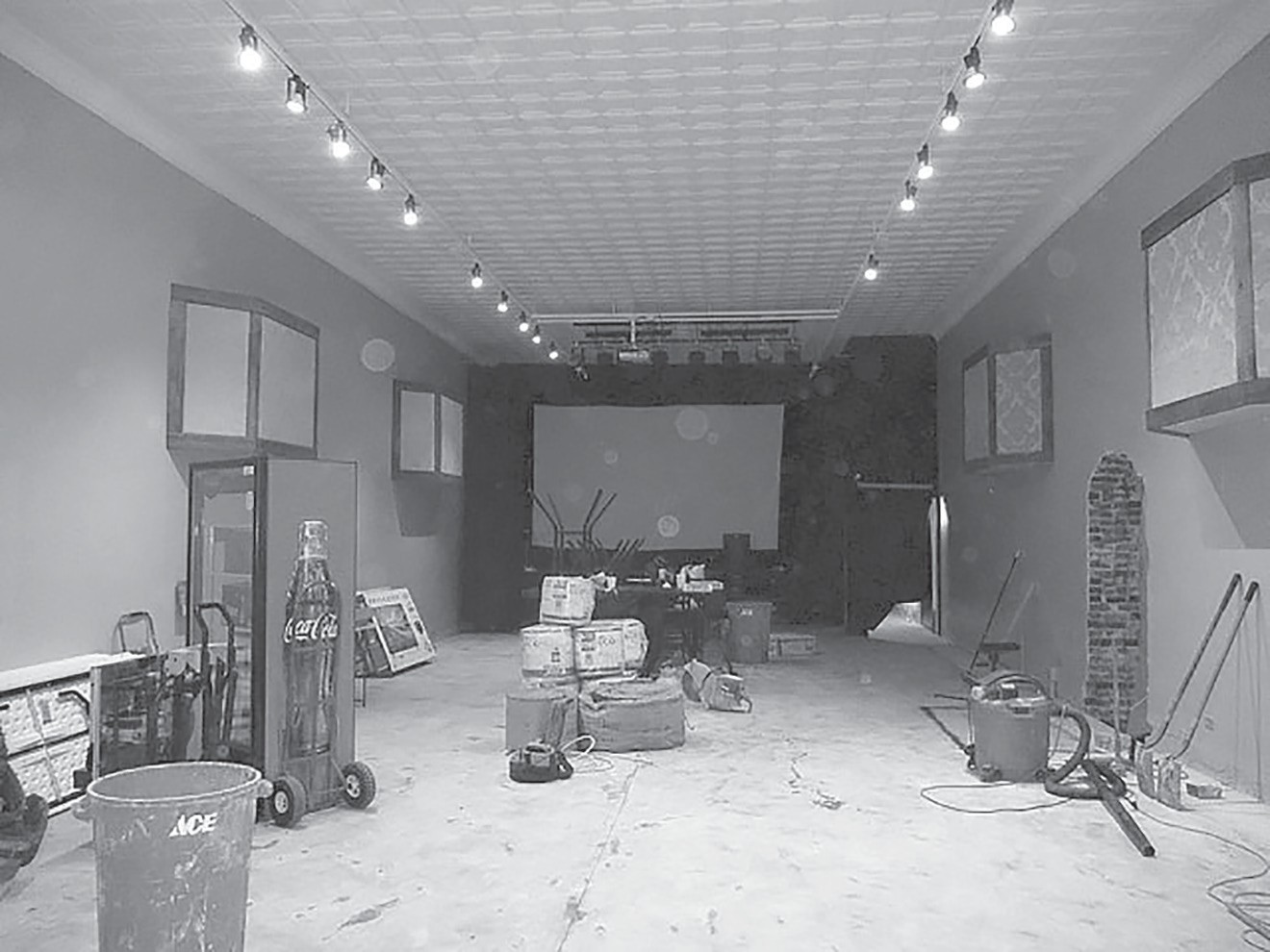 A PORTRAIT OF BECOMING. Cypress House Theater was a vortex of activity Tuesday as workers shifted into high gear to get the venue ready for prime time on Nov. 18. Stage at far end extends to almost 20’ and is equipped with theater sound and lighting. Note hole in the wall at right, actually a pass-through to the restaurant, completed (if not finished) during the brief photo session.

You’re going to hear the name a lot, so write it on the wall: Cypress House Theater. It’s the entertainment center adjunct to Swamp Tails Restaurant, located next door immediately adjacent to the restaurant’s long inside wall. It’s going to bring a whole new dimension to entertainment in the city, the county, and the surrounding area.

That’s the fanfare. The following details the first of many features to come, with a hint of what’s in the pipeline.

•Two performances. The early one at 6:30 p.m. sold out in four hours last week, so it’s not even in play here.

• The second show will follow at 9:30 p.m. Tickets went on sale Monday morning (this week) and were 50 percent sold out at 2 p.m. the same afternoon. There might be a few still available today. Or not. Check Swamp Tails Facebook page for ticket status.

• Tickets are $30 each. The room contains 29 tables at four chairs per table. That’s 116 seats available in this configuration.

• Full bar and full menu available during the 90-minute show.

• Monthly comedy nights with known talent and performers in the mix going forward.

• Destination-quality attractions for local folks and out-of-towners covering a range of entertainment events, public and private.

Down the road: Types of entertainment being considered for future feature nights – think of this as an exercise in free association – better still, as a brainstorming session. All options on the table, as the Pentagon says. Christian concerts, gospel concerts, Christmas musicals, teen nights, senior nights, movie nights, football games, etc. – “anything that will attract people, interest them, delight them, give them a place to go, an occasion to enjoy and remember, a place to want to come back again,” said co-owner Toby Hollier, the go-to guy for the Cypress House Theater “vision thing.” Also this: occasional plays, comedy improv, and dinner theater presentations by the local theater community.

Concept to grasp: Ticket pricing will vary substantially with the event, day of the week, dinner-included packages, and perhaps other variables.

The Cypress House is available for a range of private parties and occasions, either in a half room (up to 50) or a full room (51-75) configuration. Examples: graduation parties, wedding receptions, rehearsal dinners, parties of all kinds. Call Swamp Tails to discuss events and for weekday and weekend pricing.

It’s just a glimmer in some people’s eyes at the moment, but it’s a fascinating and provocative concept. Lots of variables to consider, bases to touch. So,who knows? Just have to wait and see. For now, color it pleaser teaser.

One other thing: it’s hard to capture joy in a single booking. But if you channel comedy, music, drama, and culture in a single venue, you will have done, over time, the ineffable: captured joy – like lightning – in a bottle. Not to mention the food.