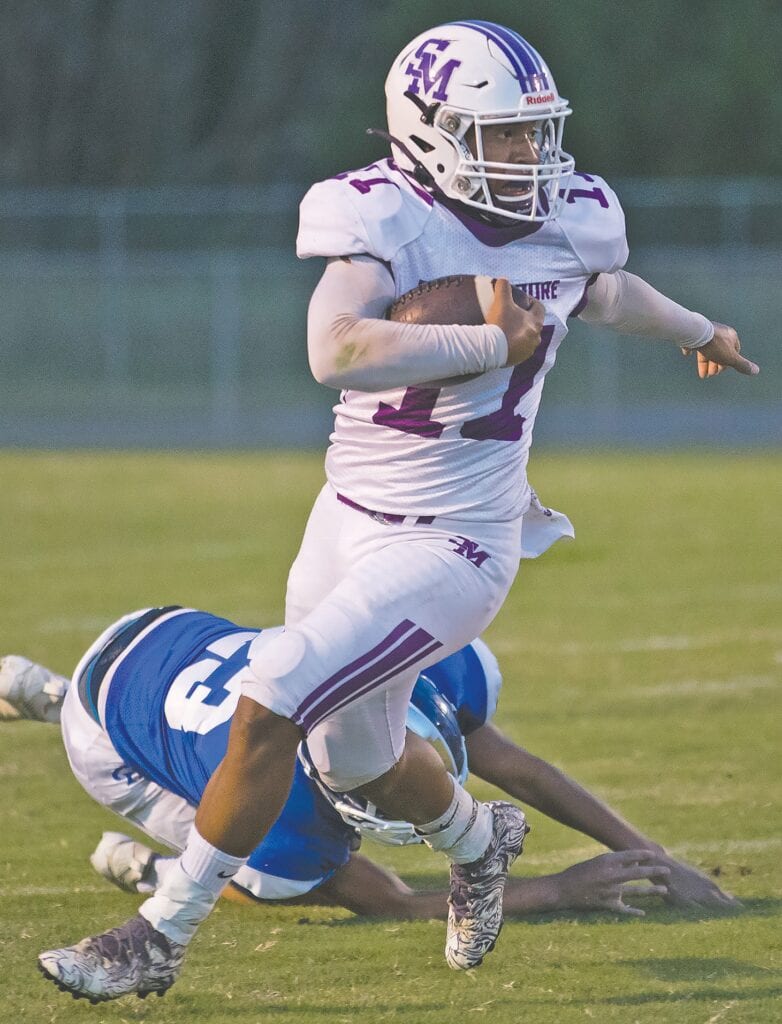 After a week off, the Susan Moore Bulldogs were ready to hit the field Friday night at Carbon Hill. They scored early and often as they came out with their first win of the season, 43-7.

Zach Smith got things started for the Bulldogs with his 2-yard push into the end zone at the 8:35 mark in the first quarter. Axel Silva followed up with the extra point putting the Bulldogs up 7-0. Carbon Hill answered with a rushing TD of their own to tie the game.

The offense hit a hot streak in the second quarter putting 22 points on the board. Smith ran in for another score, this one from 44 yards. Ramon Maldonado scampered in for a 9-yard touchdown followed by Derek Doty’s 3-yard rushing TD. Silva hit his two point-after attempts, and Tanner Nolen hauled in the ball for a 3-yard reception for the successful two-point conversion. By halftime, the Bulldogs were on top 29-7.

In the third quarter, the Bulldog offense kept pounding the ball while the tough Susan Moore defense stood their ground. Maldonado finally broke through the line for a 63-yard run for the Bulldogs’ fifth touchdown on the night. Silva’s extra point made it 36-7. With 34 seconds left in the period, Camden Lackey scored from 7 yards out on a quarterback keeper. Another Silva extra point made it 43-7 at the end of three.

The relentless Bulldog defense never let up after Carbon Hill’s touchdown drive in the first quarter, shutting them out for the remainder of the game. They held the Carbon Hill offense to 240 yards (90 through the air and 150 on the ground). Smith led the charge with 11 tackles. Jose Calderon recorded seven and Axel Calderon recorded six. Zac Reeves recovered a fumble while Doty picked off a Carbon Hill pass.

Offensively, the Bulldogs racked up 370 total yards with 321 of those on the ground. Smith ended the night with two touchdowns on 123 yards rushing and 9 yards receiving for a total of 132 yards. Maldonado ran for 129 yards and two scores while Doty ran for 60 yards scoring once. Lackey was 2-for-2 on the night for 49 yards. He ran for another 7 yards and a score. Silva was perfect on the night going 5-for-5 on extra points.

The Bulldogs were set to host the Tarrant Wildcats this Friday for their second region match up, but the Wildcats were forced to cancel the season last week after ongoing issues with COVID-19. Susan Moore gets the week off before facing Winfield at home on Friday, Sept. 18. Kickoff is scheduled for 7 p.m.