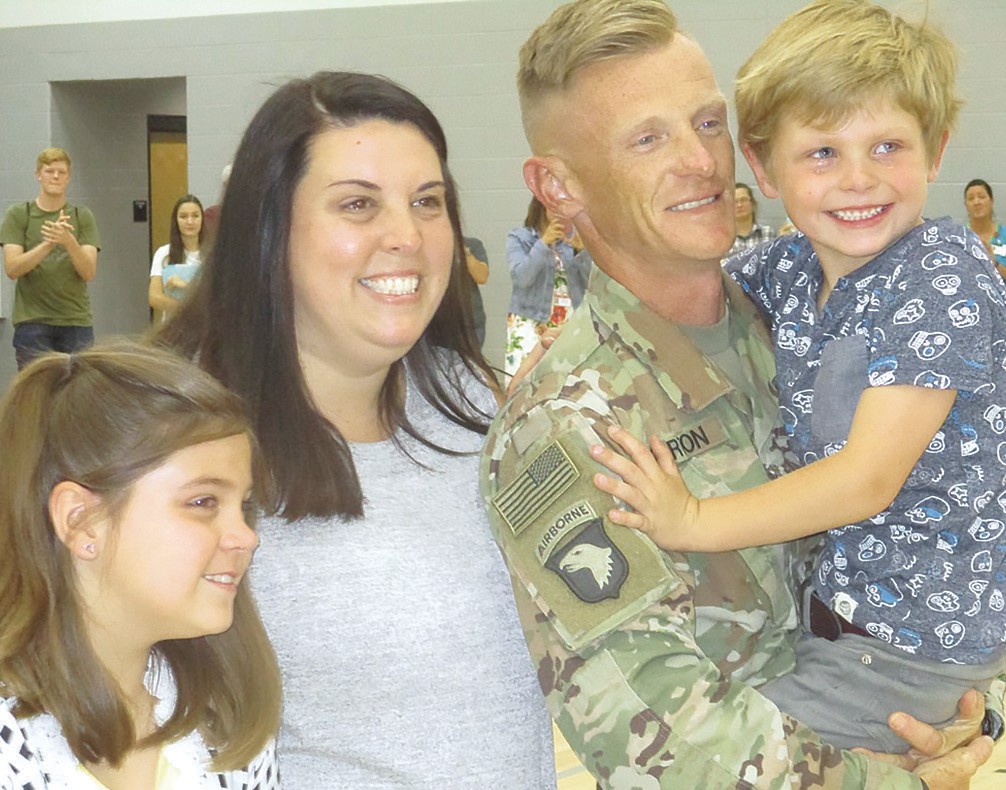 The Garten family, from left, Mallory, mother Meredith, father Jeren, and Camden. Sgt. Garten has just walked in from Iraq, joined them at a school assembly, and the kids didn’t even know he was on their side of the world.

It seemed to be a routine school assembly in the Southeastern High School gym last Friday afternoon. The whole school, K-12, was there. As a warm up, a half-dozen-odd members of the band executed a heart-thumping, syncopated, rhythmic riff on a tabletop in the middle of the gym, using hands and drinking glasses as percussion instruments on the tabletop. To help band members with the entertainment, several students were recruited from the bleachers – including, coincidentally, kindergartener Camden Garten and fifth-grader Mallory Garten. The “volunteers” were integrated into the rhythm section, quickly trained on the sequence and pattern of hand slaps and glass raps, and the riff rocked on. Then, from the exit, a colorguard of sorts marched in, accompanied by a “Welcome Home!” banner. A very military person in camo fatigues approached the crescendoing riff, strode to the table, and JOINED IN!

The riff continued on for a few beats then faltered. Camden and Mallory had discovered the new drummer –DADDY– who they thought was still in Iraq on his deployment of several months. They were so surprised they looked as if they needed oxygen through hesitant, shy smiles that bloomed in seconds into the full facial workouts shown in the photo. The riff fell apart as the family was reunited right there on the gym floor in Remlap, near their home.

Sgt. Garten is a member of the 169th Aviation unit of the National Guard, headquartered at Oneonta Airport. He’s an aircraft maintenance technician who helps keep helicopters flying overseas, and must return to complete his tour, but not before the family takes an R&R trip to the beach, he said.