ONEONTA BOARD OF EDUCATION 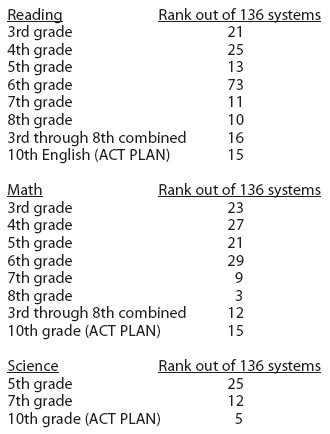 Oneonta Superintendent Michael Douglas released results for the 2015 spring semester ACT results at the board’s December meeting Monday night. Results cover performance of students in grades three through eight on the ACT Aspire test and performance of 10th grade students on the ACT PLAN test. Both tests were given in April, with comparative data released by the state in late October.

Below are the results showing how Oneonta schools scored compared to 136 (all) other public school systems in the state.

“We’re proud of the work of both the staff and the students reflected by these data,” Douglas said.“Obviously, we’re happy with the results that show strong performance. For those results that we’d like to be better, we’ll be working hard to see that they improve.”