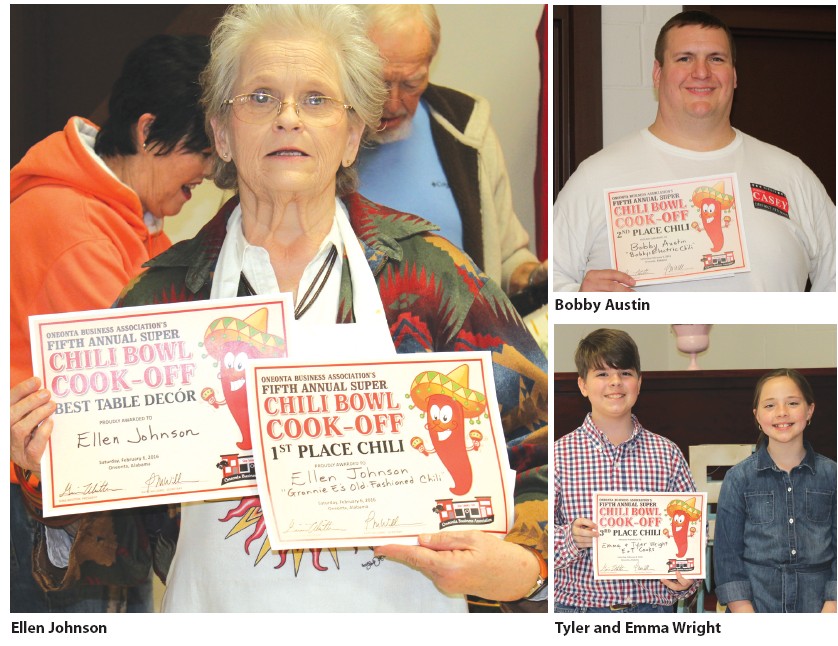 Ellen Johnson won the top prize of $200 and also won for Best Table Décor. Her chili, Grannie E’s Old Fashioned Chili, was a first-time winner but two-time participant. Using all homemade, “from scratch” ingredients, she took the gold.“Although,” Ellen told The Blount Countian,“I think it was my cornbread.”

Second-place winner Bobby Austin (Bobby’s Electric Chili) enjoyed being able to participate and “was humbled to win because there were so many great entries here.” He won $100 for his effort.

Third place was taken by future culinary artists – and siblings – Emma, 9, and Tyler Wright, 12 (E & T Cooks). When asked about their plans for the ($50) prize money, young Emma said,“We are saving up for a KitchenAid stand mixer.”

People’s Choice winner, and former Cook-Off champion, Shawn Meeks was also ahead of the game with a constant line of tasters waiting for a bowl of his delicious chili. The event was judged by Janell Starks Clark, Michelle Sargent, and Bain Brown in a blind taste test.

Patti Williams of the OBA made sure to thank all the sponsors and volunteers. It was their hard work that made the event possible.

Plans are already underway for next year’s event, with a date of Feb. 4, 2017, already set.