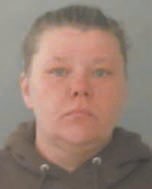 Paula Robertson, Summit Volunteer Fire and Rescue Department chief of several years, was arrested last week and charged with theft of property. She is accused of taking an amount in excess of $4,000 from the fire department and putting it into her own account, according to Blount County District Attorney Pamela Casey.

Robertson was arrested Thursday afternoon, booked into the Blount County Correctional Facility, and released after making bail of $5,000. The arrest was handled by the Alabama State Fire Marshal’s office.

Casey said Robertson has not been serving as chief recently, but Blount County Volunteer Fire and Rescue Association records indicate she answered the role call as chief of the department at the organization’s monthly meetings as recently as the March meeting. Her husband, Jerry Robertson, is shown as the assistant chief on the association’s records.

911 director Caleb Branch told The Blount Countian that the Summit Fire Department is continuing to respond to calls for assistance in its service area, having responded promptly to three medical calls and one wreck in the last week.