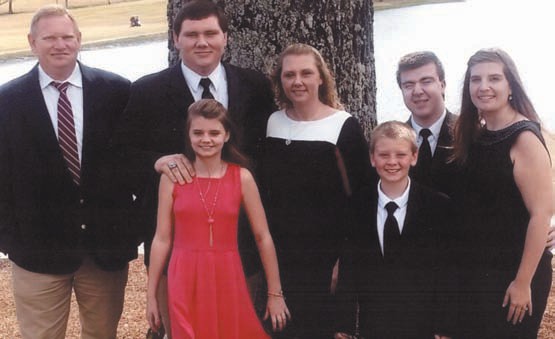 The Studdard family, from left: James, Tyler, Faith (in red), Crystal, Adam (in front of Austin), Austin, and Katherine.

When James and Crystal Studdard’s first son was born, they never imagined how sick he’d be. At just three days old, he was diagnosed with a diaphragmatic hernia, basically a hole in the diaphragm that let Austin’s organs slide up into his chest cavity. Surgery was performed immediately, and the doctors, while putting the organs back in place, had to build a plastic diaphragm for him.

For the next seven days, Austin was placed on an ECMO machine. The machine cycled his blood, reoxygenated it, and put it back in his body. In addition, a shunt was placed in his stomach. Unfortunately, the ECMO, while saving Austin’s life, caused major problems. It created a snowball effect that has left virtually every system in his body damaged.

Austin, only 19 years old, has endured 110 major surgeries. Still, he is always smiling, staying positive and loving life, making the Studdards a very close family. Along with his mother and father, Austin’s family includes Tyler (17), Faith (11), Adam (9), and his fiancée, Katherine Kennedy.

Family friend Debbie says,“After every surgery, his Nanny and I always bring him strawberries, cheese, and Mountain Dew, his favorites. For all he’s been through, he is always upbeat and positive.”

The whole family will travel to Montgomery tomorrow (April 14) to see Austin receive his certificate from the Alabama Senate and attend a banquet afterward. Austin’s prizes include a $3,000 scholarship to the college of his choice, a new laptop, and a trophy.

“I was very excited!” stated Austin, when he learned he’d won.“I’ve been looking up classes I can take. I’m not sure where I want to go yet, just whatever’s best for me.”

Austin will graduate with a diploma in May, but he will be back on the Redskin football team’s sidelines next fall for Tyler’s senior year, despite the fact he’ll be a married man. Austin and Tyler have a very special bond, and Tyler will always be by his side. No one knows Austin’s medical future, but he plans to take classes, build a house, and be happy.