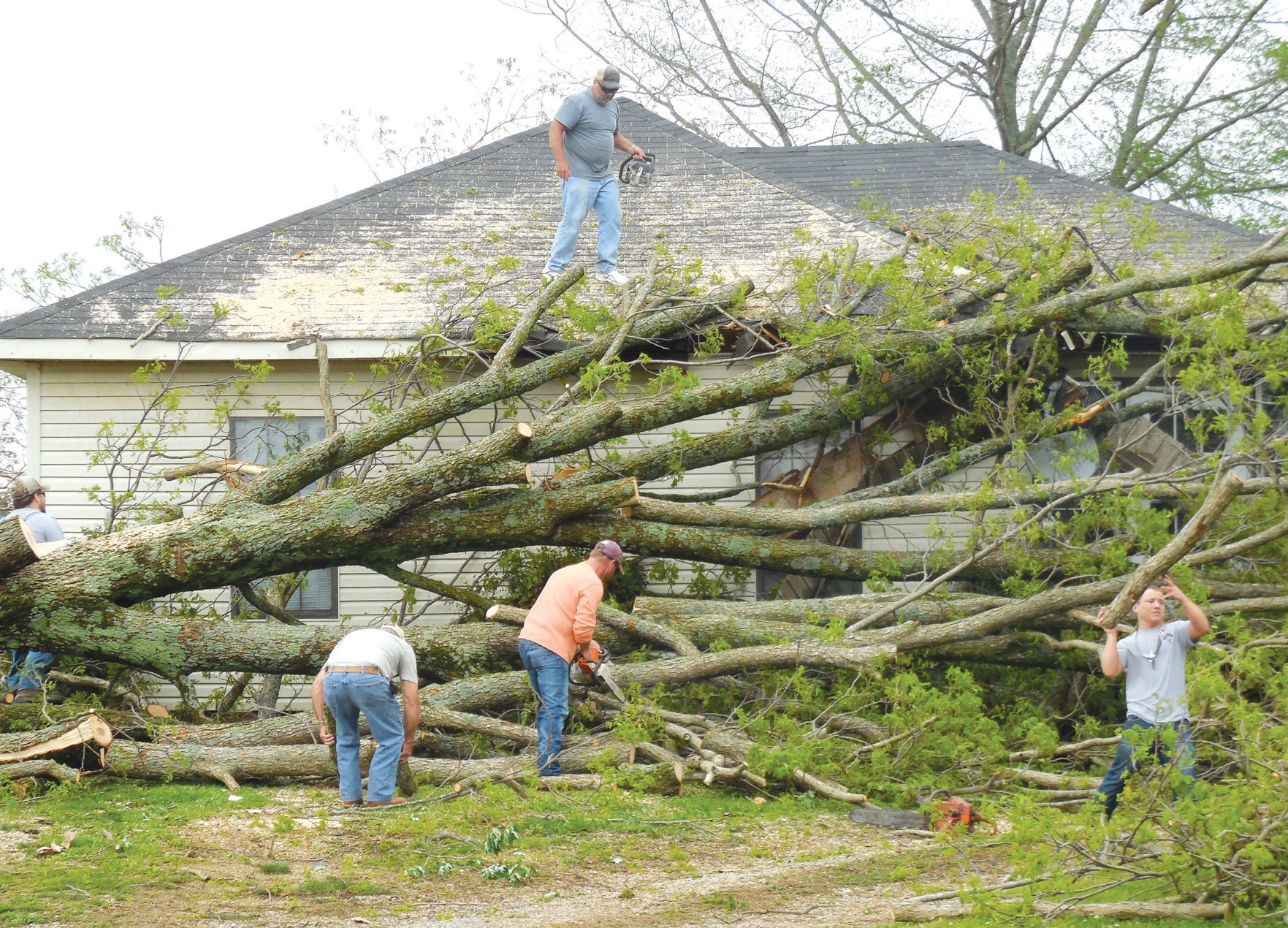 Multiple houses on Airport Road, including this one, were damaged during the Tuesday morning storms. Officials, volunteers, and family members of those affected assisted in the clean up throughout the day Tuesday.

It was too early at Tuesday morning’s 9 a.m. weather briefing to have numbers on how bad Monday night’s damage was – assessments were still in progress – but it’s not too early to tell it was a serious event, particularly in southern and eastern parts of Blount County.

“It was a major, major event out on Straight Mountain,” said Emergency Management Agency assistant director Doug Smith. “It’s a wonder we didn’t have any fatalities.”

Smith said the area was struck by two separate storms, both apparently tornadoes. The first occurred about 11 p.m. and affected the more northerly section of Straight Mountain in the area of county road 20, U.S. 231 near its intersection with county 20, and Ala 29 around Sugarland Lake and Highland Lake. The second hit farther south affecting Pine Mountain Road in the Buck Ridge area and continuing into the Holly Springs community. Rundown on impact

While no fatalities had been reported as of Tuesday morning, five people were transported to the hospital during Monday night and the early morning hours Tuesday.

Many homes were hit, sustaining severe damage and some were completely destroyed. Early indications are that there could be as many as 100 or more affected.

A number of roads were blocked, some temporarily, but several for an extended period. Again, the predominant area affected was Straight Mountain, where the number of blocked roads was “in the double digits,” said a tired Smith who had managed to catch only a few minutes of sleep during a hectic nightlong vigil.

Power outages were widespread but concentrated in the eastern part of the county, reaching about 5000 during the height of the storm, according to Alabama Power local manager Kelley Stone. Many customers were still without power Tuesday morning, though the number had been reduced to about 2500 by mid-morning, she said. Scattered outages occurred in other parts of the county.

There were scattered reports of flooding, mainly in the Dallas-Selfville and Locust Fork areas, Smith said.

Storm shelters were opened at Snead, Locust Fork, Cleveland, and Green’s Chapel Presbyterian Church, and were used by significant numbers, though a count was not immediately available.

That’s the bad news. The further bad news is that by the time you read this, a second night of tornadoes may have just served notice on the county, as the National Weather Service projects a possible replay for Tuesday night, with a high risk of further tornadoes, and medium risk of high winds, hail, and flooding in west and central Alabama.