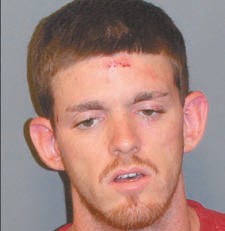 Brandon Peckinpaugh, 24, was booked into the Jefferson County jail late Monday morning and charged with attempting to elude law enforcement, reckless endangerment, and resisting arrest. His bond was set at $15,000.

According to Blount County Sheriff’s Office Operations Manager Tim Kent, an unoccupied Blount County school bus was stolen from a residence during a rash of burglaries in the wee hours of Monday morning in the Oscar Bradford Road area.

The Blount County Sheriff’s Office was notified a few hours later that the school bus was traveling near Finley Boulevard in Jefferson County. A citizen was reportedly following the school bus but was advised by law enforcement to stop.

Jefferson County law enforcement officers were notified of the location of the stolen Blount County bus and immediately responded. They came in contact with the bus as it traveled southbound on I-59.

An attempt was made to stop the vehicle, however, Peckinpaugh refused to stop. After a pursuit through the McCalla and Oxmoor Road areas, and then onto I-459 North, the bus was stopped near Acton Road and I-459.

The suspect is also believed to have stolen guns from two vehicles in the Hayden area prior to stealing the bus. At one point during the chase, the suspect threw two handguns out of the window.

Kent confirmed the stolen guns have been recovered.

Peckinpaugh told authorities he and his friends were traveling to Florida when they got into an argument. The friends left him near the Stuckey’s restaurant on I-65 in Blount County. Peckinpaugh told law enforcement he needed a ride after being left by his friends.

The suspect will be transported to the Blount County Correctional Facility once he posts bond in Jefferson County.