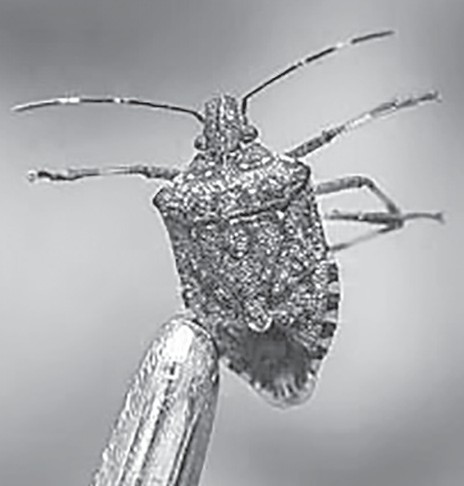 A brown marmorated stink bug. Notice the striations in the antennae.

The smallest stink bug that we have had to deal with in the last several years is the Kudzu bug. This stink bug is about the size of a lady beetle. It is usually dark-brown to black in color and you may not notice the head or legs of this bug as it feeds on your beans, figs, or kudzu. (If you have planted kudzu we need to talk.)

This insect was first found in Northeast Georgia in 2009. Since then it has steadily moved westward and showed up here in about 2011 or 2012. My first introduction to the bug was when one of my co-workers found it feeding on figs in Calhoun County. Its primary host is kudzu and soybean, but it can attack other legumes such as garden beans. Finding it on a fig was alarming to me, because figs are one of the easy fruits, fairly disease and insect free. Since their major host is kudzu and soybean, unless you live close to a soybean field or kudzu patch, they shouldn’t be a major problem for you, at least not until October.

The kudzu bug is a problem for homeowners twice a year – early spring and mid-October through November, depending on the weather. In spring, as the bugs come out of their overwintering sites, they are looking for kudzu and any beans that you may have planted. Fall is the time most of us will have to deal with this creature as it tries to use your home as an overwintering site. Your best defense against these invaders includes sealing off cracks and crevices and making sure screens are seated and without holes. Ridge and gable vents should be properly screened and doors should establish a tight seal when closed. Exclusion is the key concept when dealing with kudzu bugs and other fall insect invaders, like the nine-spotted Asian lady beetle and brown marmorated stink bug.

The brown marmorated stink bug (BMS) showed up in the county about two years ago. Donna Self from the Tait’s Gap area saw a Blount County Extension Facebook post about the insect and knew I was looking for them. She caught the first in the county and brought them to me for identification. Auburn entomologists were trying to determine their locations as they spread across the state.

The BMS is a serious pest of crops, having a wide host range, including fruit crops, corn, beans, peppers, tomatoes, and soybeans. It is also a household pest looking for an overwintering site just like the kudzu bug and the Asian lady beetle. I am already getting some reports of stink bugs showing up at homes in numbers. However, I haven’t definitely identified them as BMS, but I suspect they are. There is a native brown stink bug that looks very similar. Regardless of the species, you don’t want either in your house.

They don’t call them stink bugs for nothing! They do have an unpleasant odor if crushed on any surface in the home and may leave a stain as well. Your best defense inside the home is the vacuum cleaner. Vacuum them up, seal the bag and dispose of it or place it in a bucket of warm soapy water. Do not use a vacuum that will push them through the motor unless you like the smell of stink bug.

Stink bugs don’t bite mammals or pose any major medical threat. However, they have been reported to cause skin irritation, and it is possible for someone to have an allergic reaction if they come into contact with the bugs, but it’s not likely. They have piercing/sucking mouthparts and only feed on plant material.

Pesticides applied to the outside of the home may be somewhat beneficial in controlling the insects but don’t count on them to prevent the invasion. Make sure you are using a pesticide labeled for use outside the home and be sure to follow the label directions.

One individual indicated he had used a small, square plastic bottle, about one-quarter filled with soapy water and would just slide it under the bug and they would drop right in. That is a trait of stink bugs, when disturbed they just drop down to the ground or into whatever is under them. I thought it was a good idea.

You may not be seeing any activity right now, but there will come a day in the near future that they will fill the air and come knocking on your door. They like light-colored homes and prefer the side of the house that gets the most sunlight. If you live in a dark-colored home deep in the piney wood, you may not have a problem.

This information also applies to the Asian lady beetle as well. They put off an odor, not as bad as a stink bug, and will leave a stain if crushed.

One of my co-workers owned a farm near Dadeville that was covered in kudzu. I asked if I could lease the farm to do some deer hunting and he agreed. I moved my camper down in the middle of October and you could smell the kudzu bugs; they were everywhere. They crawled into the camper and even got into my tree stands before I could get them up. I had one, just one, that got into my glass of tea while I was there and I can tell you, they not only stink, but they don’t taste very good either.