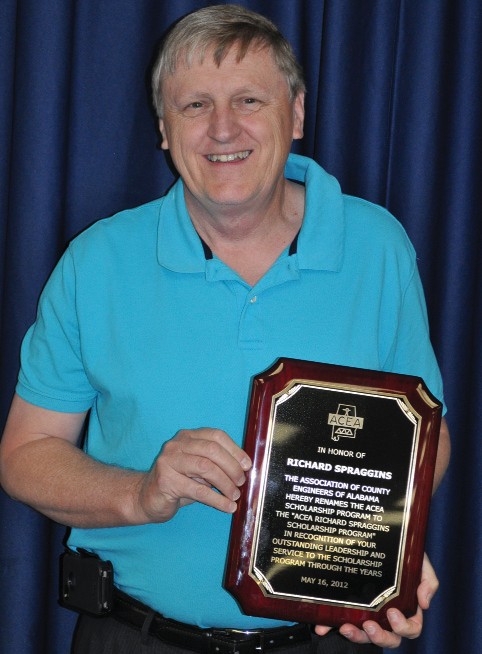 The annual scholarship program of the Association of County Engineers of Alabama (ACEA) has been named the “ACEA Richard Spraggins Scholarship Program” in honor of one of the program’s strongest supporters. The honor was announced at the association’s annual conference last month. Spraggins is the former county engineer of Blount County.

The scholarship program awards two $2,000 college scholarships each year, one to an incoming freshman who plans to major in engineering and one to a student who is already studying engineering. Applicants must have a recommendation from a current county engineer.

“Richard believes in this program and has worked hard to make it a success through the years,” said Randy Cole, president of the ACEA. “His efforts are an investment in the future of our profession, and he is most deserving of this recognition.”

Spraggins retired from Blount County effective Feb. 29 this year after a career spanning more than 35 years – one of the longest in Blount County public service history. He served as county engineer from Mar. 1, 1981, to Feb. 29, 2012. He is now employed as a consulting engineer for Mobile County.

According to the ACEA, Spraggins has a record of significant involvement with the organization going well beyond the scholarship program. He is a past president, past vice-president, and has served as a district board member.

The ACEA is an affiliate organization of the Association of County Commissions of Alabama, representing professionals serving in engineering-related capacities in county goverment.