State of the county: past and future 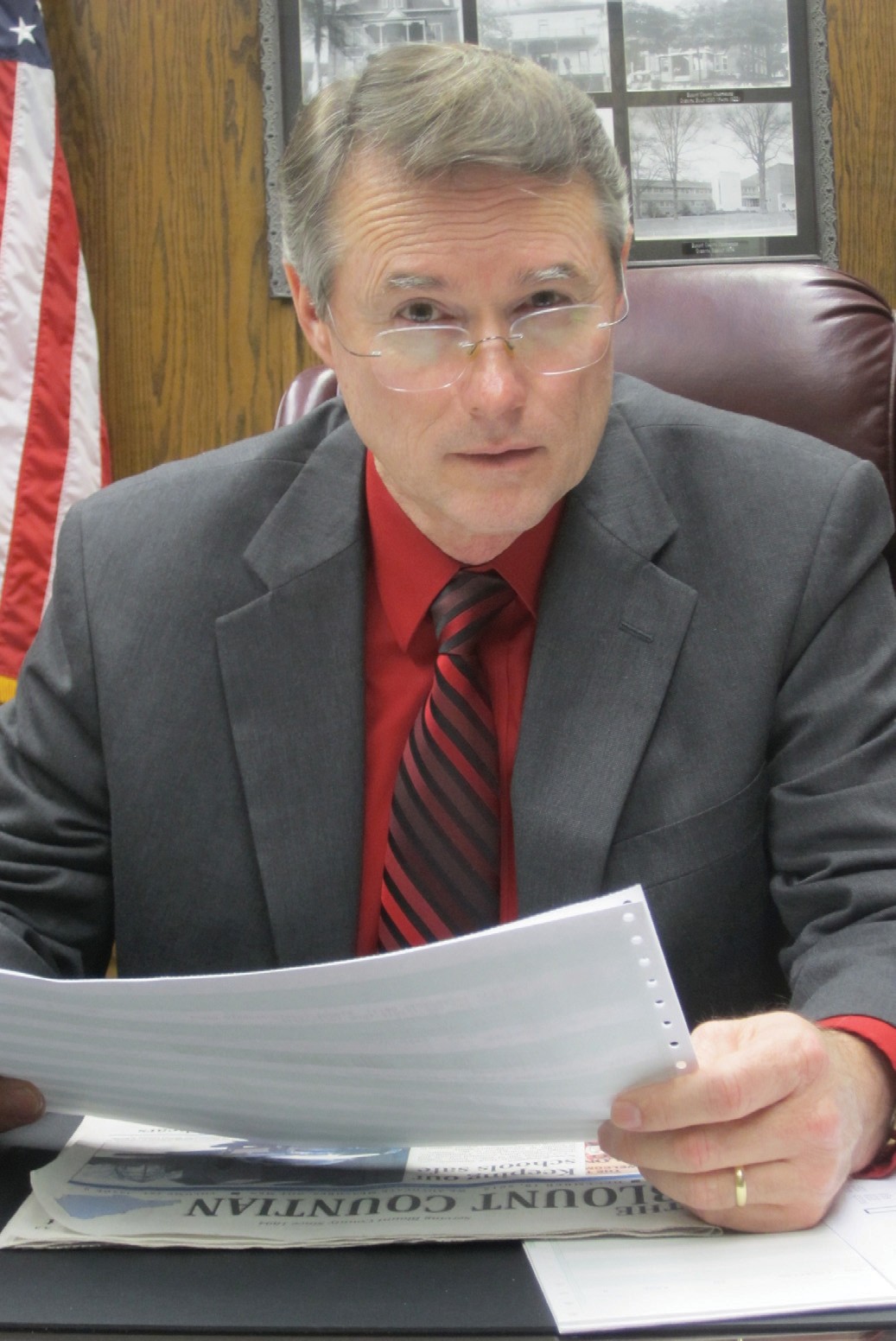 To get a sense of the state of the county after a tumultuous year, and where it’s poised to go for the year ahead, The Blount Countian interviewed Blount County Probate Judge and Commission Chairman Chris Green, whose job equates roughly to county chief executive. Green dealt mainly with four issues affecting county progress – issues that in one form or another have occupied much of the county commission’s attention this year and whose resolution will figure prominently in the county’s overall well-being in the years to come. They are roads, economic development, tourism, and economic sustainability. Roads

“After somewhat of a tumultuous start last year, the county commission moved to focus on a number of important matters to the county’s future. The ATRIP program was one of the main efforts last year. (Ed. The Alabama Transportation Rehabilitation and Improvement Program provides 80 percent state financing to upgrade/resurface important roads known as “farm-to-market” roads or “major collectors” in each county.) Overall, Blount County got more money ($11.5 million) and more road projects (10) approved than any other county in the state except Cullman.

“I am proud of that and proud of the work done by our commissioners, engineers, and legislators to help bring it about. We won’t fully realize the magnitude of this program until 2015, when most of the work will be completed. Work on county road 27 has already begun and will be completed in the spring. Next summer we’ll do county roads 26, 8, and 29. We’ll complete the third round by the end of 2015 with county roads 5, 17, 15, 35, 47, and 55. (Ed. More than 70 miles of high-traffic county roads will be resurfaced by the time the project is complete.)

“Because work is spread over time, the county will be able to finance much of the matching portion of the projects ($2.8 million) out of available county funds. But that matching amount is a large amount for a rural county like Blount, and it may be necessary to borrow some money to complete those projects.

“Three other significant improvement projects outside of ATRIP should also be mentioned. We just received $758,572 from the state to complete 2011 storm damage repairs on Maple Drive and Joy Road in District 1. That work should be complete by the end of next August. Another ongoing project that has been under way for some time is to complete the resurfacing of county road 1. Half of that road – from Cleveland to the county road 33 intersection was resurfaced last year and we expect to see the remaining section to Allgood completed by the end of 2014.” Economic Development Council

“After ATRIP, the most important thing on the county’s plate is how we proceed and where we go with economic development. It could be even more important for the long term.

“We’ve got to realize that this Economic Development Council the county commission has endorsed won’t yield results in the short term, but it’s long-term impact can be immeasurable.

“We’ve got the full support of the mayors and the legislative delegation, and a plan to select the members of the executive board. Once they’re seated, we’ll move forward on funding it with commission support, state grant funding support, and contributions from municipalities and major businesses.

“The Economic Development Council won’t ‘belong’ to any of those entities. It will be a non-profit corporation modeled on those that have overseen economic development in St. Clair, Cullman, and Marshall counties. This will be an organization that can help give the county direction on challenges we’re going to face, whether we’re ready or not. They will have an independent voice.

“They’ll help us roll out the welcome mat to new businesses interested in the county, respond to outside inquiries in a timely fashion, and help us identify and respond to challenges like infrastructure issues, from an economic development standpoint.

“Nothing is more important to the stability of the local economy, the stability of families, and the longterm welfare of the county than having meaningful jobs here to offer our citizens and our young people. That’s what this economic development emphasis is all about.

“We’re laying the groundwork for that effort. The mayors of municipalities will discuss points of importance as we move forward. I’d like to see the council incorporated by February with board members seated by April. The next step would be to apply for community development funds to serve as seed money. By next year, depending on how quickly things come together, the board might be ready to hire an economic development executive director. In the meantime, board officers would work as economic developers on a volunteer basis.” Tourism

“Meanwhile, we have to keep looking at the potential for tourism development, because our county park, our covered bridges, and the Locust Fork River can have greater economic impact on the county than we’ve ever given them credit for in the past.

“I hope we can have a study done by one of our universities to gauge the magnitude of the economic impact of those resources. People are coming now from outside the county to use them. How many are coming? We don’t have a good fix on that number. How many more would come if we positioned ourselves to roll out the welcome mat to them? We need to know.

“More along those lines, we hope to have the Locust Fork River named to be a part of the Alabama Scenic River Trails system. It’s considered one of the top 20 percent of streams nationally for scenic beauty and biodiversity. We’re talking canoe trails here, not hiking trails. Canoe trails are defined by access points to the river.

“We don’t think of our covered bridges as parks, but they are. People come to see them, they spend leisure time there, they take photographs, and so on. We need to plan for the future care of these areas, both the bridges themselves and the natural beauty of their surroundings.

“At Palisades Park, we’re pursuing purchase of additional land to provide a greater opportunity for climbing and bouldering. We’ve applied for a 50 percent matching grant to help us acquire that land. My goal is to get this done without it costing the county anything, pursuing other grants to raise the other 50 percent needed for matching funds. The initial application has gone through two approval levels already and we’re awaiting final approval from the National Park Service. We hope it will be completed and authorized in 2014.” Sustainability: facing facts

“As we look forward and consider prospects for maintaining our county roads and bridges, we’re going to have to face some unpleasant facts.”

Fact 1: “We don’t have sufficient revenue to maintain them. With ATRIP, we’ll make big improvements over the next two years, but Blount County has 1100 miles of roads. I foresee we’ll continue to fall behind in maintenance of the less-travelled roads, which is the majority of them, and the ones many people use for the last few miles to get to their driveways.”

Fact 2: “We must either increase the tax base or we have to consider the possibility of additional revenue sources to address this need. We won’t see an increase in the tax base because of our economic development effort in the near term. It’s my opinion as we come to grips with these facts, we have to realize at some point that it will take a combination of increasing the tax base and finding new revenues to meet the needs and expectations of our citizens. People always say, eliminate more ‘fat’ in the budget and use that to supplement revenues.”

Fact 3: “There is no ‘fat’ in the Blount County government budget – hasn’t been for several years. While citizens might honestly disagree on what constitutes a necessary expenditure, I can confidently tell you money isn’t being wasted, and there are no expense items a majority of our responsible citizens wouldn’t agree are necessary.

“Costs of roads and county government in general have increased tremendously over the last decade. Revenues have increased, but only a fraction of how much costs have gone up. At some point, some semblance of balance must be restored.

“Beyond that, this county has achieved clean audits from the state examiners office for an unprecedented nine consecutive years, with no findings of errors in accounting for money spent. Squeezing the budget for more dollars to support major county needs isn’t a solution. It’s all wrung out.

“I’d like to say that I’m not just here in this job to mark time. I want the time I spend here to really count for something in improving the prospects for the county now and in the future. I consider it and honor and a privilege to serve the citizens of the county, and I want you to know my office is always open to you.”