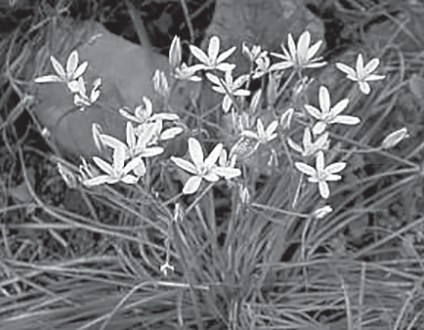 My stepmother brought home a little plant several years ago to plant out in the yard. It was a gift from one of her friends at church. It was a pretty little flowering plant with white petals that did indeed form a star, if you looked at it long enough. The leaves of the plant were rounded, much like that of a wild onion.

I liked the plant to the extent that I brought one home after a year or two and planted it at my house in Blountsville. Over time, I noticed that this little plant was multiplying and beginning to spread. The leaves were much darker green than the surrounding grass so it was very noticeable, especially because it was pushing up in February when most other plants are not.

They continued to spread and grow at the home place so my brother decided to try and kill it. (He isn’t a plant lover.) He sprayed them with glyphosate (Roundup), but that didn’t even turn them yellow. I decided to do a little research and see what this tough plant was. It was, and still is, the Star-of-Bethlehem.

The Star-of-Bethlehem may also be known as “summer snowflake.” Its scientific name is Ornithogalum umbellatum and it’s classified as a monocot in the lily family. If it is contained in a flower bed or some other inescapable container, then it is a pretty little cool season perennial. However, if it escapes, to a lawn or golf course or a pasture, then it becomes a nasty little weed.

It grows in clumps of several individual plants and is often mistaken for wild garlic or onion, but doesn’t produce that familiar odor when crushed. It reproduces mainly from bulblets and only minimally from seed. Therefore, it is not quick to take over an area but moves steadily over time.

All parts of the plant are toxic if ingested by humans or livestock. This plant is more common and is more of a problem in states north of Alabama, but you can guess that it is only a matter of time before it is an issue here as well. As a matter of fact, one of the ranchers here in the county brought me a sample about three years ago and said it was taking over about three or four acres of his pasture. Control measures were needed in order to reclaim this acreage.

Control, to the tune of about 94 percent, has been achieved by using a product called Gramoxone Max, which is a Restricted Use Pesticide. It may only be purchased by someone with a Restricted Use Pesticide License. Commercial applicators (those that charge for their services) have access to the product. Keep in mind that with a 94 percent control rate, multiple applications may be required over time. Herbicides that most homeowners have access to have very little impact on it.

I advised my brother to take a sharp shooter shovel and dig the plants up and throw them onto the road to be run over and smashed by the traffic. I never stopped to think that maybe one of the bulblets could get stuck in the tread of a tire and taken home by someone to begin life anew. We could be just spreading the love by tossing them onto the road!

Needless to say, you never get all the little bulblets, so the Star-of-Bethlehem is still lingering in his lawn, just not as thick as it once was. As the heat of the summer begins, these little plants disappear. They will pop up again early next spring, keep in mind. Whether it is a cool season perennial weed or a pretty little ornamental flower, just depends on where it is in your landscape.

Think twice about plants you receive as gifts from others. They will often have a common name or maybe two or three common names. Do your homework before you plant it to make sure it is not an invasive plant that you will deal with for years to come. If you need help with identification, bring it by the Extension office or send me a picture from your smart phone. You can either text it to me at 256-531-0033 or send it as an e-mail attachment to porchdw@aces.edu.

The Extension office will be closed from Dec. 20 through Jan. 2 in accordance with the Auburn University holiday schedule.