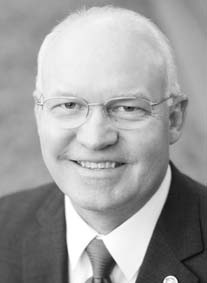 Blount County’s District 34 Rep. David Standridge has withdrawn his name from consideration for Speaker of the Alabama House of Representatives. He announced last week he would not seek the position.

In a statement to The Blount Countian, he said: “I am humbled by the encouragement and confidence many have shown in me during this difficult time for our state. I am honored to serve as chairman of the Rural Caucus and to be considered for Speaker. However, after prayerful consideration and consultation with my family, at this time I do not plan to seek the position. I will continue to support our great state and will continue to work diligently for transparency and accountability in government as I represent the people of District 34.”

Standridge was one of only a few representatives who opposed then-Speaker Mike Hubbard’s continuation in that job following his indictment on ethics charges in 2014. Hubbard was recently removed from office following his conviction on 12 of 23 ethics charges by a Lee County jury.

In a telephone follow-up to his statement, Standridge said he had never announced as a candidate for Speaker, but that not being Speaker will allow him to address issues he couldn’t if he held that job.