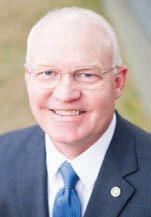 District 34 Rep. David Standridge (R – Hayden), representing about half of Blount County including Oneonta, has been appointed to a seat on the House Rules Committee, it was announced last week by Speaker of the House Mac McCutcheon. The powerful Rules Committee sets the chamber’s agenda for each work day, determining which bills will be debated on the House floor.

Standridge officially began his Rules Committee responsibilities this week when the Legislature convened for the 2017 regular session on Tuesday.

“Throughout Rep. Standridge’s tenure in the House he has proven to be a respected leader,” McCutcheon said. “The members of the Rules Committee are given great responsibility because they determine which bills will or will not come up for a vote, and I know that David will fulfill this assignment with wisdom, fairness, and integrity.”

“We have our work cut out for us this year and I will do my part to ensure important issues facing our state are brought to the House for debate,” Standridge said. “It is an honor and a privilege to be selected to serve my constituents in this capacity and I appreciate the confidence the Speaker has placed in me. I will work hard to ensure the needs of Blount County and Marshall County are served.”

Standridge also serves on the House Boards, Agencies, and Commissions Committee, the Local Legislation Committee, and chairs the bipartisan Alabama Rural Caucus. He was first elected to represent District 34 in a 2012 special election, then re-elected without opposition in 2014. He is a former law enforcement officer and served as Blount County Probate Judge and commission chairman from 2007 to 2012.