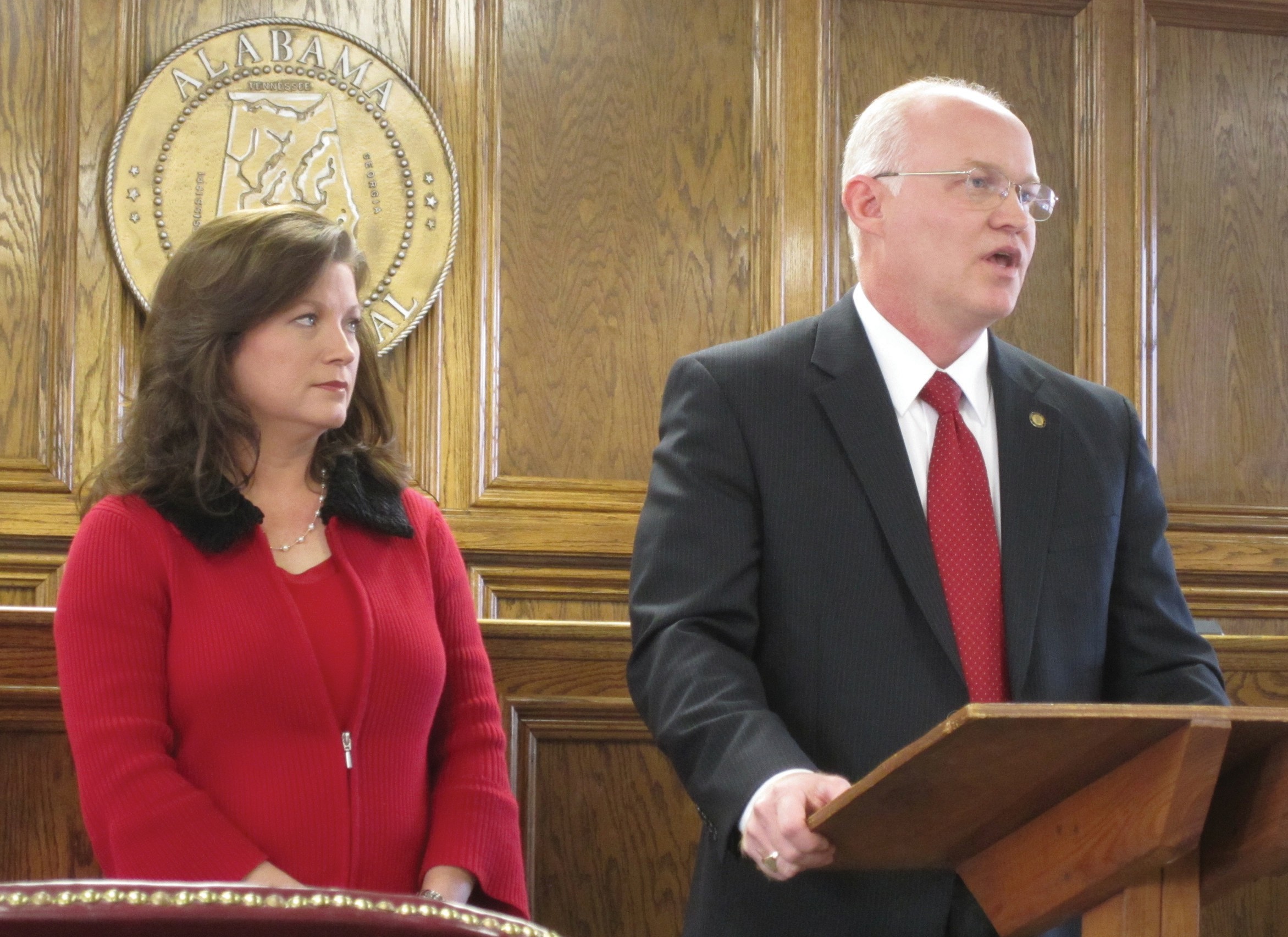 Probate Judge David Standridge, accompanied by his wife Danna, announces his candidacy Friday for the Republican nomination for U.S. Representative, District 6. A crowded field of candidates promises to give incumbent Spencer Bachus the most serious challenge of his 10-term career.

“It’s a classic case of David vs. Goliath,” David Standridge proclaimed in announcing his candidacy for the U.S. House of Representatives District 6 race against 10- term incumbent Spencer Bachus, “and I’m David,” he concluded, to the chuckles of the 100-odd well-wishers assembled to hear the announcement.

Standridge noted that those who have a background in law enforcement, as he does, having served 21 years in the sheriff’s department, are trained to respond to an emergency.

“I think we’ve got an emergency in Washington, D. C.,” he said, “and I’m ready to respond.” He added he thinks voters for this particular position with its best-known candidates Bachus (R-Vestavia Hills) and state Sen. Scott Beason (R-Gardendale), “have a hunger for a choice,” and that’s why he’s entering the race.

“I don’t claim to know all the answers, but one thing I can guarantee you is that I will serve with integrity,” he said in a veiled reference to Bachus, whose personal ethics have been questioned for using his office for personal gain via access to inside financial information he allegedly used in making personal investment decisions.

Standridge said his No. 1 priority is the national debt. Calling it a “runaway train” he said it stands currently at more than $15 trillion, and at that rate, by the time of the election, the interest alone will total more than $10 billion per week.

“We can do better,” Standridge said. “We can’t keep spending more than we take in. We’ve got to send someone to Washington who understands that. Period. We have to have a balanced budget in Washington.

“When I came into office as probate judge and commission chairman, I didn’t just talk about issues (paying off debt), I did it. With the help of the Blount County Commission, we made the decision and stuck to our guns, and Blount County’s long-term debt is paid in full. It was accomplished during the toughest economic times since the Great Depression.”

“A wise person once told me to look at the past actions of the candidates and you will know what kind of leader they will be,” Standridge said. “I have a record and Congressman Bachus has a record, and I invite voters to look at my past service to Blount County to decide who can better represent them with integrity to change Washington.” Statement to citizens

In the aftermath of his announcement, Standridge released the following statement to The Blount Countian:

“After I announced I would retire as probate judge, I was contacted and asked to consider running for Congress. It became apparent that many people in District 6 were not happy with Washington or the announced candidates and wanted another option. After much prayer and with the support of my wife, family, friends, and many of the elected officials I have worked with in Blount County and throughout District 6, I made the decision to run.

“The district includes most of Blount, much of Jefferson, Shelby, Chilton, Bibb, and Coosa counties. There are six candidates who are running for the Republican nomination, with the Jefferson County vote being split six ways. After close evaluation of the district, it is very clear that Blount County could very well decide this election. Blount County is expected to vote the third highest among the six counties. With the many Blount County residents who have contacts in other counties through work or other organizations, this county could have a big impact on this election.

“There is no way that I can raise the money that some others in the race have. However, recent history has shown that political races are no longer controlled by the wealthy. Every vote counts the same, and if people who know me will support me by spreading the word with their contacts, helping with the campaign, contributing what they can, and especially voting for me, then we can win this election.

“If you would like to help in this campaign, go to davidstandridge.com. Danna and I ask for your support, your vote, and your prayers.”

Other Republican candidates challenging Bachus for the nomination include Tuscaloosa businessman Stan Pate, Al Mickle of Alabaster, and Justin Barkley. Two Democrats will compete for the privilege of challenging the Republican nominee in the November general election. They are retired Air Force Col. Penny Huggins Bailey of Leeds and defense lawyer William Barnes of Birmingham.