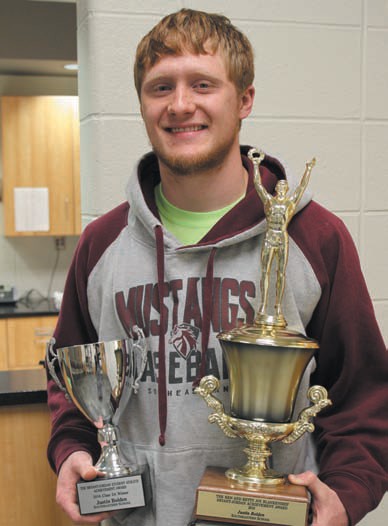 Justin Bolden recently attended a special banquet. He and 103 other students from across the state were honored as Bryant-Jordan regional winners, receiving a $2,500 scholarship. Fourteen of the students, two each from classes 1A-7A, received class awards in either the scholar-athlete or achievement category.

Bolden was very surprised when he was named the overall achievement winner for Class 2A, which is awarded for overcoming hardship. That put him in the running for the state achievement award against some pretty tough competition, including a double amputee wrestler. Two tables with family and supporters from Southeastern High saw a photo of their school as the emcee announced that Bolden won the 2016 State Bryant-Jordan Award for Achievement—the first win for a Blount County student athlete.

But, truthfully, Bolden doesn’t see what all the fuss is about. He sees himself as an ordinary guy, looking forward to graduation in May. But those who know him say there is nothing ordinary about Bolden. In fact, the people who know his story see him as extraordinary, and most would say he’s an inspiration.

Bolden’s life has been anything but easy. His mother, a drug addict, was in and out of his life from ages 3-12. She spent much of that time in and out of prison. At age 6, his father disappeared and Bolden moved in with his grandparents. His grand- mother was the glue that held the family together. He lived a pretty normal life with his grandparents until his grandmother died. That’s when Bolden, 10 at the time, says everything fell apart.

Bolden had been attending Southeastern until his grandmother died. From there, he went to live in Trussville with an aunt and uncle. He even went into foster care at one time. He really wanted his mom and dad to come get him out of foster care, and at age 12, they did. But it was not a happy time. While he returned to Southeastern, he said that his parents hopped from house to house, living in five separate houses that year.

Unfortunately, Bolden’s mother and father continued to abuse drugs and alcohol, and when he was 14, his parents were arrested for theft and sent to jail. Bolden says his grandfather has always tried to help people, so they moved into his uncle’s house. His uncle was a heroin addict.

At 16, Bolden was living in his grandfather’s house with his older brother, Roderick. His grandfather receives a disability check every month, but it wasn’t enough to cover their expenses. Bolden went to Oneonta and applied for a job at Taco Bell. He got the job, and he worked after school and on weekends, sometimes until 3 a.m. Bolden was now an integral part of paying the bills and he got a second job at Pizza Hut to help out even more.

When Bolden turned 17, two important things happened. The first was his brother, Roderick, moved out. The second was his father’s release from prison. His father moved in with Bolden and his grandfather. During this time, his grandfather was helping make sure that Bolden’s father stayed away from drugs. Bolden always felt that if his father was away from his mother, he would have a better chance of staying off drugs. Bolden still refuses to have anything to do with his mother. Little did Bolden know, his life was about to change forever.

Of course, this story is just a part of Bolden’s life. Through all of the ups and downs of his personal life, he has maintained a 4.0 grade point average while playing football, basketball, and baseball. His ability to pay half the bills, maintain an excellent GPA, and play three sports was unbelievable to friends, teachers, and coaches. It seemed that no one worked harder than Bolden. He would do his homework before games, after work, and during any spare moment of class time he had. And remember, this was a teenager working as hard as any adult.

Bolden has had exceedingly caring coaches who have helped him in any way they could. He is especially close to coach Keith Moore and his family who have been looking out for Bolden as early as fourth grade. Bolden says Moore is like a father to him and Moore said he considers Bolden to be his son.

Another coach Bolden is close to is Michael Burkett, the head football coach at Southeastern. Last summer, Burkett held two separate workouts each day. One was at 6 a.m. while the other was at 5:30 p.m., expecting players to make at least one of the workouts. However, with Bolden’s demanding work schedule, he couldn’t make it to either workout. Getting home at 3 a.m. most days made it nearly impossible for Bolden to get up after only three hours of sleep, and he had to be at work before 5:30 the next morning.

“Coach Burkett asked me if there was any way he could help me make it to summer workouts. I was joking with him, and I told him it would be perfect for me if Coach could open the weight room at 3 a.m. when I got off work,” remarked Bolden.“The crazy thing is that he did. He was always there to meet me at 3 a.m., and when I was finished, he slept in his office waiting for the 6 a.m. workout.”

Bolden’s senior year has been full of ups and downs too. During football season, he suffered a concussion and neck injury. He remained healthy during basketball season, but broke his leg during baseball season. For a few days, Bolden was unable to work due to his broken leg; luckily, his income tax return covered the work he missed. He was able to go to the prom with his girlfriend. All that’s left is for Bolden to graduate, something neither of his parents or brother did.

Bolden enlisted with the Marines and was saving money to help his grandfather while he was away at boot camp. Just a few days before the banquet, he learned that he would not be medically cleared for the Marines. He was diagnosed with spinal stenosis, a disorder that slowly pinches the nerves and dissolves muscle as he gets older. Bolden was discouraged until he found that he was the recipient of several scholarships from the Bryant-Jordan Award.

Bolden said crazy things have continued to happening to him after he won the award. He said that a lot of letters had been sent to the school and most of them included money. Bolden remembers getting a card from a couple in Pensacola. The card simply said,“Take a day off!” and it came with $500. Then, a man named Michael A. Mouron of Birmingham was so inspired by Bolden’s story that he let him choose any new truck. Bolden loves the truck, but is saving all his money.

His best offer came from Austin Peay University in Tennessee. They’ve offered him a full scholarship to be the baseball team’s manager. Bolden thinks he might make a good coach someday – like the coaches he’s had. His future plans include working with a construction company this summer, and most likely going to Austin Peay in the fall. Despite all the attention he’s been getting, he hasn’t changed. He is one of the most humble human beings you’ll ever meet.

Southeastern principal Glenn Puckett said of Bolden,“If we could bottle up that hard work, dedication, and all of Justin’s other great qualities, chances are the world would be a much better place.”