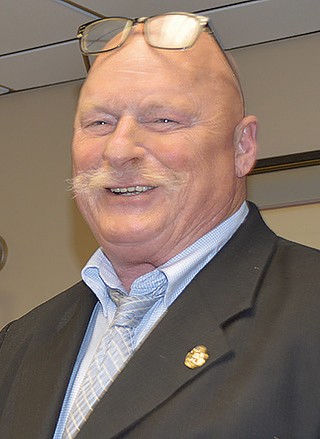 The Lions Club of Alabama held its annual convention at Joe Wheeler State Park and selected Tim Sosebee, the current president of the Hayden Lions Club, as the new 2nd Vice District Governor Elect of District 34A (the Northern Alabama District.) Sosebee is the first from the Hayden club to hold a state position. He officially takes office on July 1 in a district that has 45 clubs and more than 1,100 members.

Sosebee is currently visiting clubs in his district and preaching the theme of service. He emphasizes the call to duty for all Lions is “Service…Service…Service” and that was the message he gave to Oneonta Lions on Tuesday, March 27. “It’s all about service. The Lions’ motto is ‘we serve.’”

Sosebee gave an example of the Hayden club that has, under the leadership of the club’s first vice president Bob Manney, started a food pantry that currently serves 80- 100 people each month.

He also said the “secret weapon” of a club is it’s Leo program. Leos are ninth- through twelfth-grade high school students who help implement a club’s programs. The Hayden Leo Club has 87 members, the largest in the state. In addition to their work at the food pantry, they recently visited a military veterans’ facility, handing out tote bags with needed items.

The Leos also visited the Callahan Eye Foundation in Birmingham to learn about the work they do. One of the primary focuses for Lion Clubs International is to prevent blindness and assist those with impaired vision, a mission given to the Lions by Helen Keller in 1925 when she charged Lions with being “knights of the blind in the crusade against darkness.” This mission is accomplished through an eyeglass recycling program, support of eye banks, eyesight screening and treatment for those at risk of sight loss, as well as diabetes awareness and education programs.

Sosebee’s encouraging message to everyone, including Lions, is “positive actions lead to positive results.”