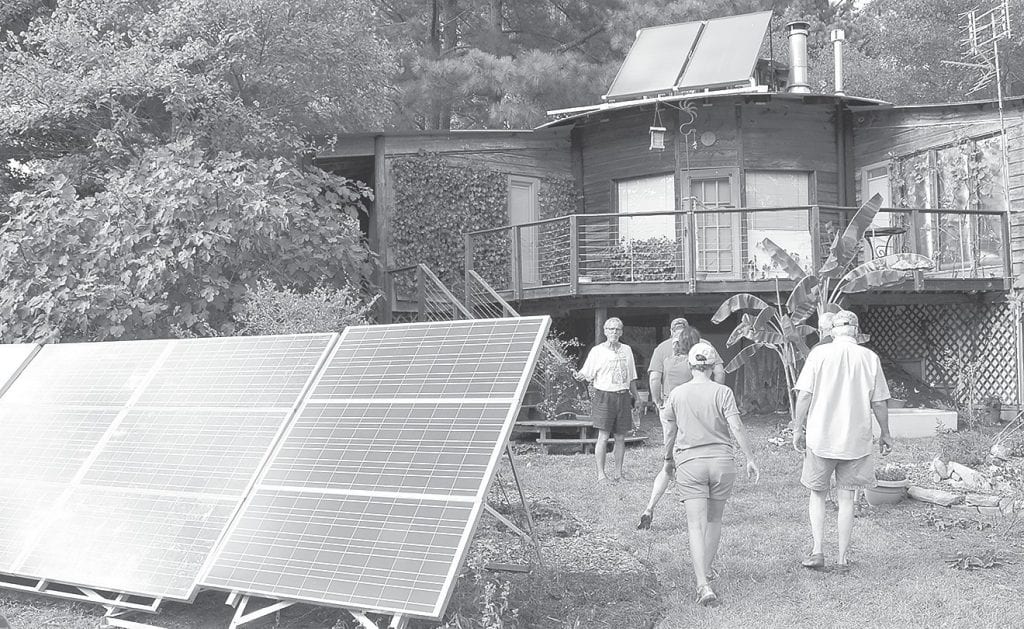 Stephen Guesman talks to members of the tour about his off-the-grid Dodeca-Yurt home.

The place to be this past weekend was at the 28th annual Solar Tour Alabama event held in the Royal community. At least that is what 135 people who braved the heat (especially on Saturday) thought when they showed up to tour five homes that utilize solar power to varying degrees.

It was part of the National Solar Home Tour led by the American Solar Energy Society. Attendees came from all over Alabama, Tennessee, and Georgia. A group of professors and students from the University of North Alabama, which is the first college in the state to offer a degree in sustainability, were also there to learn from people who practice what they preach.

The five main concepts pointed out during the tour were the importance of efficiency (better to save than to generate energy), how buildings should be designed around the seasonal path of the sun, how to use active solar technology, why collaborating with neighbors who understand renewable resources and sustainability is important, and how growing your own food can nourish you both physically and mentally.

One of the homes on the tour that many can relate to is a 1950s ranch style house that one of its owners jokingly said must have been built with the intention to waste energy. Even so, the owners have worked diligently to retrofit the home. They installed energy efficient appliances and LED lighting, and went farther with geothermal heat pumps, high efficiency windows, and foam insulation in the exterior walls, which had no insulation before. They also added a photovoltaic array (solar panels) to generate electricity. The home is still on the power grid, but this system with a battery storage system allows the owners to reduce their dependency on the power company. That is just some of the conservation efforts made to reduce the home’s carbon footprint.

All the homes featured are unique and offer many ways to conserve besides just using solar power. One is an underground home, another built from wheat straw bales. The only one that is completely off the grid is a 12-sided Dodeca-Yurt and it is powered by a modest 2.3-kilowatt system with storage batteries.

For some, living in one of these homes might require some adjustments, but maybe less than one might think. One of the greatest testaments from Saturday’s outing is that even though the mercury was at least in the mid-nineties with high humidity, none of the homes were uncomfortable. Just thinking about how we consume power, and too often waste it, is not a pointless effort given the country’s dependence on fossil fuel, a finite resource.

If you missed the tour, not to worry. Blount County has its own experts in Daryl Bergquist of Earth Steward Consulting (earthstewardsolar@icloud.com) and Stephen Guesman of GreenWorks Design (greenworks.sg@gmail.com). Both of their homes were part of the tour.