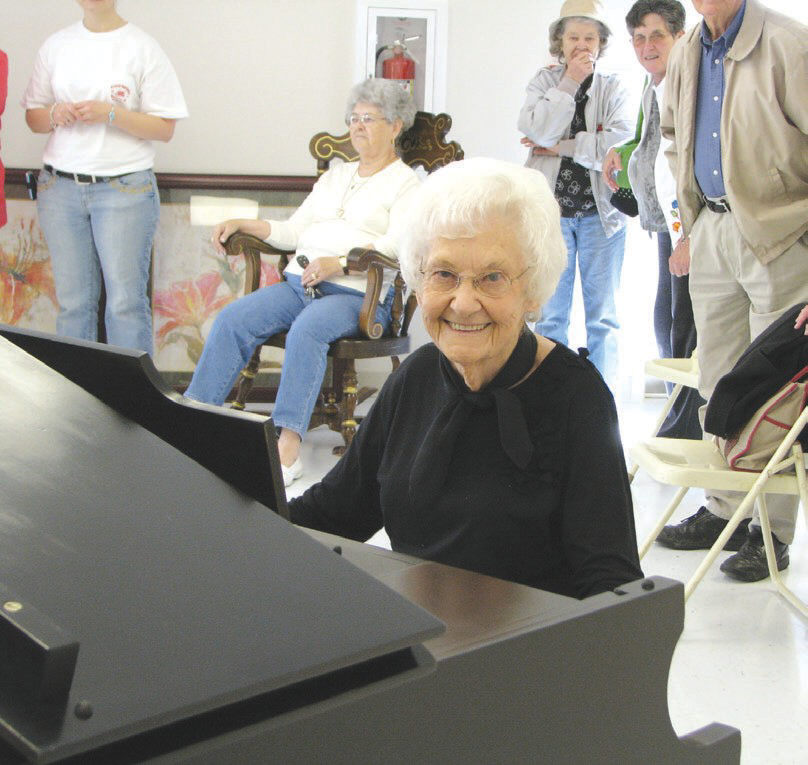 Velvie Lyles finds the new piano to be to her liking at the Snead senior citizens center.

The structure, which is a little over 3000 square-feet, has been in the planning stages since center director Jane Childers took over three years ago.

“I have been director for three years as of April 6,” she said, “and I began planning it right after I took over here.”

Funding was secured from several sources. The town received appropriations from Sen. Hinton Mitchem and Rep. Elwyn Thomas to augment its own funds in order to make the project a reality.

Construction began Aug. 15, 2008, and wrapped up last month, and last Friday, April 3, the center was unveiled with a special ribbon-cutting.

Snead Mayor Tim Kent welcomed those in attendance and thanked several officials for their work and support of the project.

The beautiful new building will house the town’s senior program and will also function as a community center. The seniors will occupy the building from 8 a.m. to 1 p.m. Monday through Friday but the building can be rented by the town to individuals, groups, or businesses for various events.

The building includes a large central meeting area along with a fully-functional kitchen and restroom facilities. Also, there is plenty of storage and Childers has an office near the front door.

“We serve 59 meals every day,” said Childers, “and that includes 25 meals that are delivered to the homebound. The new kitchen will make it easier on our volunteers to prepare those meals and load them for delivery. In addition, the new layout here (and more space) should make things a lot nicer for our regulars.”

Outside, there is plenty of parking and the large covered entry should make entering and exiting the building easier for the center’s members.

A large piano has already been delivered, although the fundraising project to pay for the piano is still in progress. Also, the Snead VFW Hall has donated a large television for use by the center’s seniors.

“We average about 25 to 30 members every day,” said Childers. “Our female members used to do a lot of quilting but we had kind of stopped that because we just didn’t have the room. Now we do.

“We are also interested in starting to offer some line-dancing classes now that we have room enough to move.”

The ribbon-cutting was Friday and the center’s members christened the new facility with a singing Monday.