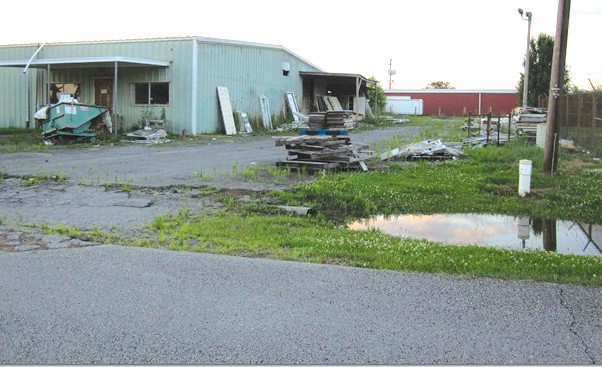 Resident John Seaton objects to this and other views in Snead which present alleged nuisances to him and others.

Speaking for a second consecutive month, resident John Seaton called on the Snead Town Council to force owners to clean-up unsightly and potentially dangerous sites on their town properties. Citing additional information from his prior visit, Seaton referred to a 2006 town ordinance addressing nuisances.

Seaton distributed photographs to the council and read names and addresses of property owners for the lots shown. He said he had obtained the names from the county revenue commissioner. He further noted that five of the six listed live outside Snead.

Councilman Jack Freeman, as previously, expressed hesitancy about having the town act. He contended the town has perhaps 100 similar properties and he has concerns about singling out some.

Seaton countered by asking, “Why have it (an ordinance), if the town is not going to enforce it?” Seaton addressed that question to the council and town attorney Brett King, who was in attendance.

King countered with a speed limit example. He suggested that decisions may be made based on the egregious nature of the offense. With a 35-mileper hour limit, does one act when a speeder is at 37? “Where do you draw the line?” he quizzed.

Seaton alleged he had contacted the owner of the property nearest his. He said the owner promised action within two weeks but had, evidently, forgotten their conversation of a year prior with a similar promise. He asked that the town begin action.

Mayor Curtis Painter, as with Seaton’s prior request, promised letters would go out. Seaton alleged the ordinance provides the town will act after two weeks of the notice, unless other arrangements have been made. Town insurance

Once Seaton had finished his remarks, local insurance agent Stephanie Allison requested that the town bid its insurance coverage. She alleged that she had asked in years past for bid specifications but had been unable to obtain them. She noted that she would need at least a month’s prior notice to be able to get quotes.

Councilors promised to provide the bid opportunity in the future. Town clerk Rae Ware suggested that she would have the specifications available in March of each year. In later action, the council approved continuing its coverage, which expires June 13, with present provider, Adamson Insurance Agency. Bank charges

In response to council questions, Ware explained that one of the town’s banks has indicated it has begun charging fees on the town accounts. According to Ware, the bank could not give specific charges, which began June 1, but it appears the charges may run $15 to $20 a month on each account.

In his regular remarks, Painter decried a lack of funds for adequate road maintenance within the town. He explained the town had borrowed funds several years ago to rework all town roads, but since that time enough money had not been placed in reserves to maintain the streets.

Freeman noted he felt the town needed to re-examine its expenditures. He cited his computation that the police department receives 40 percent of the town budget. He said he is embarrassed to telephone contractors when the town has only $36,000 budgeted for road work.

When Ogles asked who approved the funding and reserves, Freeman, seemingly sheepishly, admitted the prior council – of which he was a member – had when it approved the budget. Following other discussion, the council decided to explore options available for free military equipment for town use in future road work. Police department

Upon the heels of Freeman’s observation, police chief Phillip Weaver asked for permission to add David Baker as a part-time officer. As Ogles questioned Weaver, the chief noted that Baker would only be paid for time worked and that the department was low on available part-time personnel.

In addition to Baker’s approval the council followed that with approval of Joe Avery as a non-paid reserve. Weaver explained that Avery would ride with paid officers. Other matters

Councilors also discussed setting a closing time for the town parks. That discussion included a suggestion from Weaver of a curfew for teens. Members agreed to delay action for more information.

The meeting included an executive session, verified as legally permissible by King, involving the “good name and character” provision for such.

Councilman Dale Snead missed the June 10 meeting. Councilman Dale Sanders joined the other members along with several observers. The council holds its regular sessions the second and fourth Mondays of each month at 7 p.m. in the town community center.