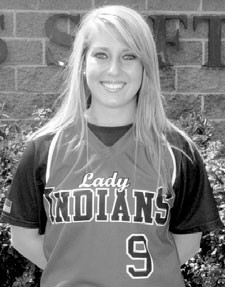 Sloan was named the North Division Pitcher of the Year by the Mississippi Association of Community and Junior Colleges (MACJC).

The sophomore right-hander was 15-6 with one save and a 2.00 ERA. She threw 13 complete games and four shutouts and finished with a school record 109 strikeouts in 126 innings.

She was named to the MACJC All North Second Team her freshman year after posting a 10-3 record and a 1.34 ERA with 52 strikeouts in 73 innings.

Blue Mountain College is an NAIA school that will be competing in the Southern States Athletic Conference for the first time this year. Other schools in the 14-team conference include Auburn Montgomery, Faulkner, Mobile, and Spring Hill.

Rebecca is the daughter of Jack and