Denis Ryan at the sound board at Talladega. His picture now hangs over this same board. -Joyce Samples

Sadly, Denis’s life was abruptly shortened on Jan. 2, 2019, due to a pulmonary embolism. Once a blood clot reaches your heart, it is unrecoverable despite best medical efforts. Those who attended his memorial service were a testimony of the love Ryan had for others. At the time of his death, Ryan was a son, brother, uncle, dad, and granddad. He has two sons, Jacob and Jordan, and one granddaughter, Alexa, with whom he had a close and special relationship. Ryan was also engaged to Danielle Cody at the time of his passing.

On Friday, Oct. 1, a dedication ceremony was held to honor and commemorate not only what Ryan did professionally, but as a friend and co-worker. As family and friends gathered to dedicate the Talladega Superspeedway Broadcast Compound in honor of Ryan, the many words spoken about him reflected the compassion he had as an A-1 mixer and for the love he had for life, his family, and his co-workers. 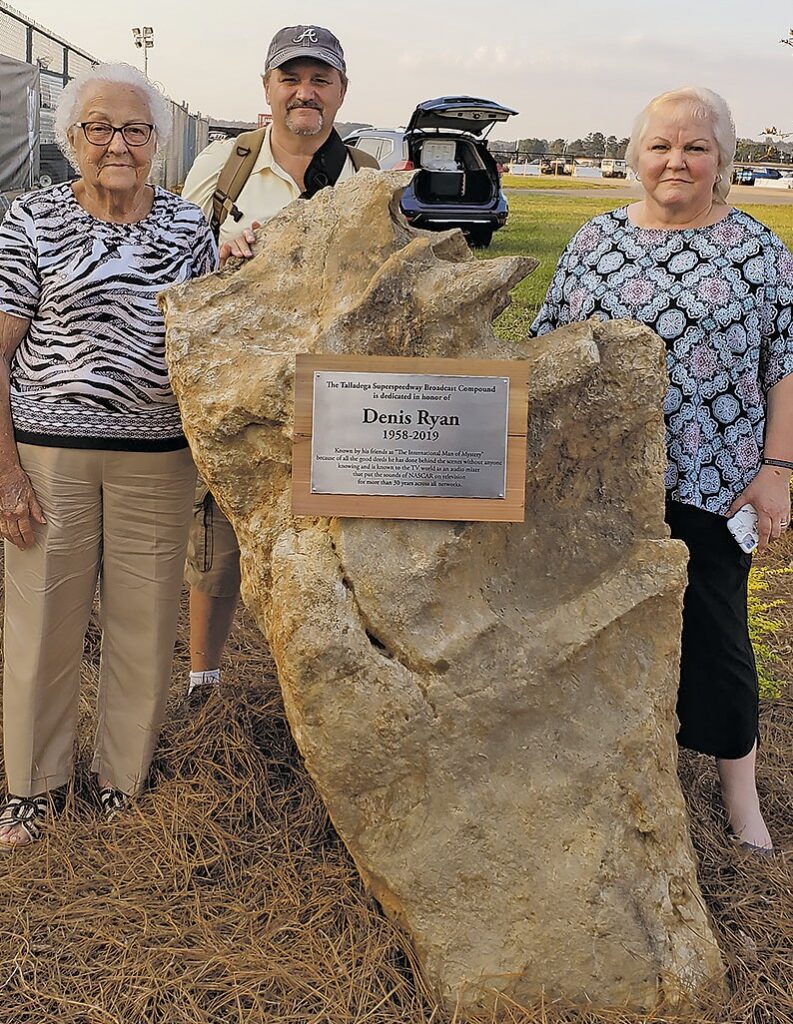 As vice president of technical operations for NASCAR Steve Stum (a dear friend and co-worker who “grew up” in the audio field with Ryan) spoke, smiles and even a few tears were among the crowd. He recalled working with Ryan for more than 30 years and the impact he had on NASCAR, as well as organizations. Stum noted that this dedication was more than a year overdue, but it was something that needed to be done because of the type of guy Ryan was. Stum said, “We are proud of him (Ryan) and what he has done for us (NASCAR).”

The ceremony was held just outside the gated media compound area where there is a large rock monument that bears an engraved plaque reading, “Known by his friends as ‘The International Man of Mystery’ because of all the good deeds he has done behind the scenes without anyone knowing and is known to the TV world as an audio mixer that put the sounds of NASCAR on television for more than 30 years across all networks.” This monument will be a reminder to those who knew Ryan and the huge impact he had in the audio world of NASCAR.

As the dedication portion of the ceremony came to a close, longtime friend and co-worker Kristine Rothwell of NBC Sports offered a toast to Ryan by saying she hoped that all in attendance can offer “his love, dedication, and sense of family” to those they encounter.

As I continued to speak with co-workers, time after time it was mentioned how Ryan was exceptional at what he did and was “one-of-a-kind,” “a good guy,” and “one of the best of the best.” It was also mentioned how Ryan was there for the team even when he was not on duty. Stum recalled how Ryan was traveling one Sunday afternoon in Tennessee when he was contacted about a problem an audio mixer had with a new soundboard in Miami. Stum immediately contacted Ryan, who pulled off onto the side of the road and walked the audio mixer through the two-hour program from his truck.

For those who may not realize the huge responsibility Ryan had week after week as an A-1 mixer, it is really a big deal. Every sound, and I mean EVERY SOUND, had to be perfectly matched with the audio being broadcast over the TV networks. Ryan was responsible for mapping out hundreds of cameras, sounds in and out of the racecars, and radios all across the NASCAR racetracks each week. He had to make the sound package complete. His mother, Margaret Ryan, put it into perspective by saying, “He was the chief sound man. He had a ‘killer ear’ and knew when the end product was good.”

Ryan grew up in the Oneonta area, specifically Straight Mountain, and attended Appalachian High School. From there he attended Lee College in Tennessee before starting his career in the audio field. He worked for companies such as PTL Network, ESPN, NBC, CBS, and NASCAR. Ryan did some studio work in Nashville for a time. His profession allowed him to travel to places stateside and overseas including Japan and Hawaii.

Over his career, Ryan received many awards for his exceptional work including seven Emmys. Ryan’s sister Joyce concurred with the many wonderful things said about her brother. She said audio crews dearly loved him not only for his role as a leader, but also as a great supporter and teacher. It was nothing for Ryan to be right in the mix of things as the crew was working on a project. He had great camaraderie with the crews and was an overall great guy to work for and with. Because of the type of person he was, Arizona State has created a scholarship to help up-and-coming audio technicians.

As a friend and co-worker, Stum had this to say, “He (Ryan) was always smiling and the one person you could count on. He wanted to produce the best product possible, but always kept everything in perspective. He was a good guy and I miss him dearly. You don’t find many people like Denis.”