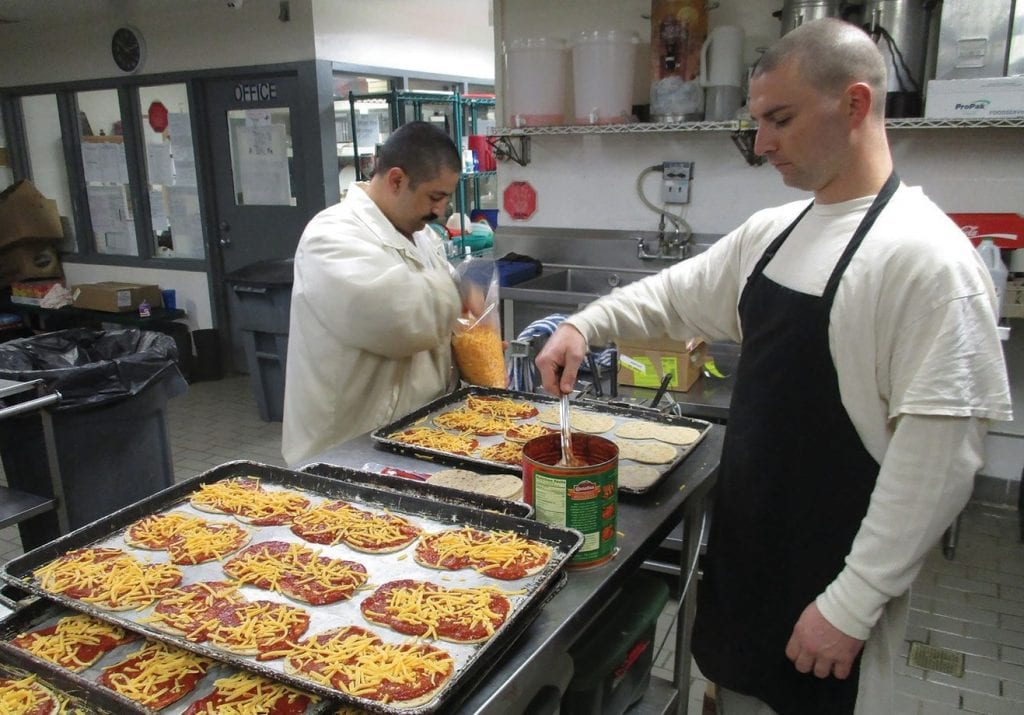 Inmates, from left, Hugo Contreras and Scott Simmons team up to prepare lunch for 120 or so inmates, featuring lots and lots of cheese pizzas.

The Sheriff’s food account for Blount County, with annual deposits averaging just over $160,400 for the years 2014-2017, is adequate to feed inmates at the jail with only a small amount per year generally left over, according to Blount County Sheriff Loyd Arrington.

Whatever is left at the end of each year is simply rolled over into the next year, he said. Accordingly, the approximately $50,000 residing in that account last week reflects the accumulation of funds over the nine plus years of his tenancy in office, Arrington said.

He added that Alabama counties vary greatly in the adequacy of funding to feed inmates, depending to a large extent on the size of their jails and the number of inmates housed therein. The state allows each sheriff $1.75 per inmate per day, and municipalities pay $10 to $15 per day, depending on the county, to house their inmates in the county jail.

On that basis, some counties have barely enough to feed inmates, while others, like Etowah County, with a 1,000-person capacity jail, housing federal prisoners – for which the federal government pays $40 a day – have substantial excess funds annually. Arrington said Blount County houses no federal prisoners because of federal requirements and oversight involved.

The fact that some counties receive substantial excess inmate food funds – which some sheriffs quote state law to justify keeping for their personal use – has rendered the subject controversial statewide. Below is the language of Code of Alabama 36-22-17, which has been subject to varying and contradictory interpretations.

“All fees, commissions, percentages, allowances, charges, and court costs heretofore collectible for the use of the sheriff and his deputies, excluding the allowances and amounts received for feeding prisoners, which the various sheriffs of the various counties shall be entitled to keep and retain, except in those instances where the county commission directs such allowances and amounts to be paid into the general fund of the county by proper resolution passed by said county commission of said county, shall be collected and paid into the general fund of the county.”

Arrington said he has not withdrawn any funds from the Sheriff’s Food Account for his personal use, although he interprets state law as entitling him to do so. If he did, he said he would be required to report it as income and pay federal and state taxes on it.

“The Alabama Department of Examiners of Public Accounts doesn’t audit this account either,” Arrington said, “because they consider it a personal account.”

“Be sure to tell people that I have withdrawn money from that account and used it to make major purchases over the years to improve food storage for the jail kitchen, ” Arrington added. He said those purchases include $28,000 for a large cooler, $37,000 for a walk-in freezer, and small amounts from time to time for kitchen utensils and supplies.

• Most of the food used to feed inmates, excluding bread and occasional sale items, is purchased from Merchants Food Service, a wholesale food distributor in Clanton, and averages in the general range of $11,000 to $12,000 monthly.

• The most recent health department inspection of the jail kitchen and food storage/handling produced a score of 99.

Following is a sample of food served at the jail for three meals on three different days recently. Copies of weekly meal plans for three weeks in March were given to The Blount Countian as examples of the jail diet. The meals shown are typical of meals served during the month of March.