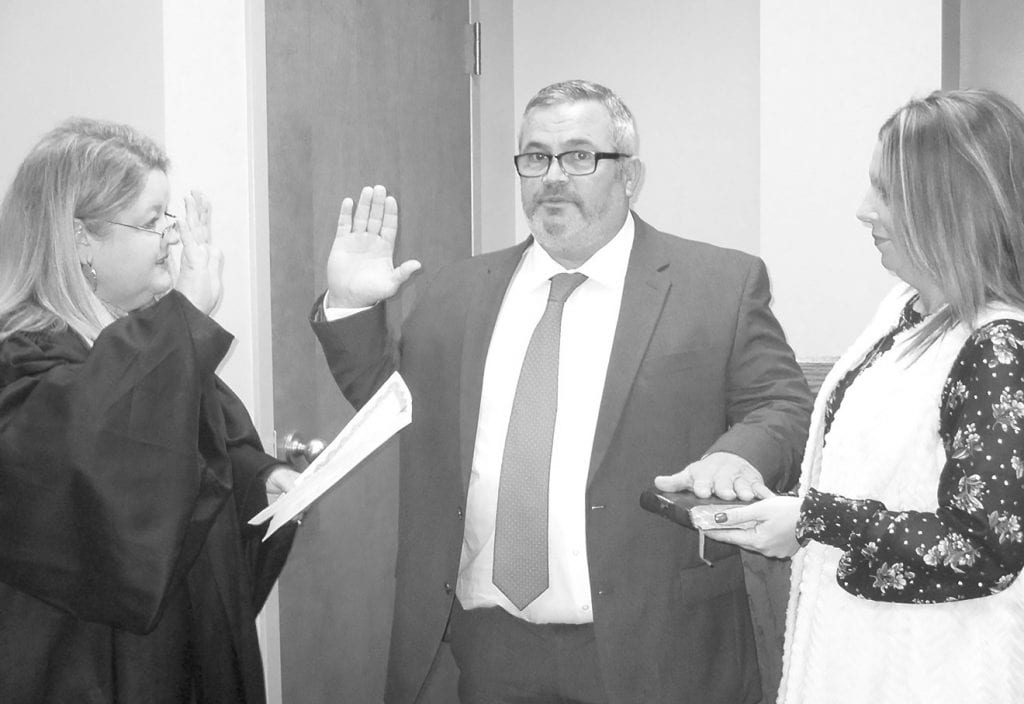 District 1 Commissioner Allen Armstrong is sworn in for his third term. From left, District Judge Sherry Burns, Armstrong, and Stephanie Lovell, assisting in the ceremony.

The Nov. 4 Blount County Commission meeting was unusual for the amount of ground covered: a public hearing on a landfill application, a work session and business meeting combined into one meeting, swearing in of two recently-reelected commissioners, and retirement recognition for two long-service District 1 road crew employees.

It received an update from Sgt. Jeremy Rudy on the Roadside Trash Detail (RTD), learning that the inmate detail had worked the covered bridges, all of District 1 roads and most of District 2 roads submitted for the first cycle, in the process collecting 5,500 lbs. of debris. Rudy thanked the commission for $10,000 worth of special weapons and equipment requested for the RTD as it continues to clean Blount County roadsides.

The commission discussed at length sheriff-elect Mark Moon’s request to move sheriff’s investigators’ compensation to a salary basis equivalent to present compensation plus 10 hours overtime pay, to align the county with federal compensation practice. A decision and vote on the matter was postponed until the December meeting. 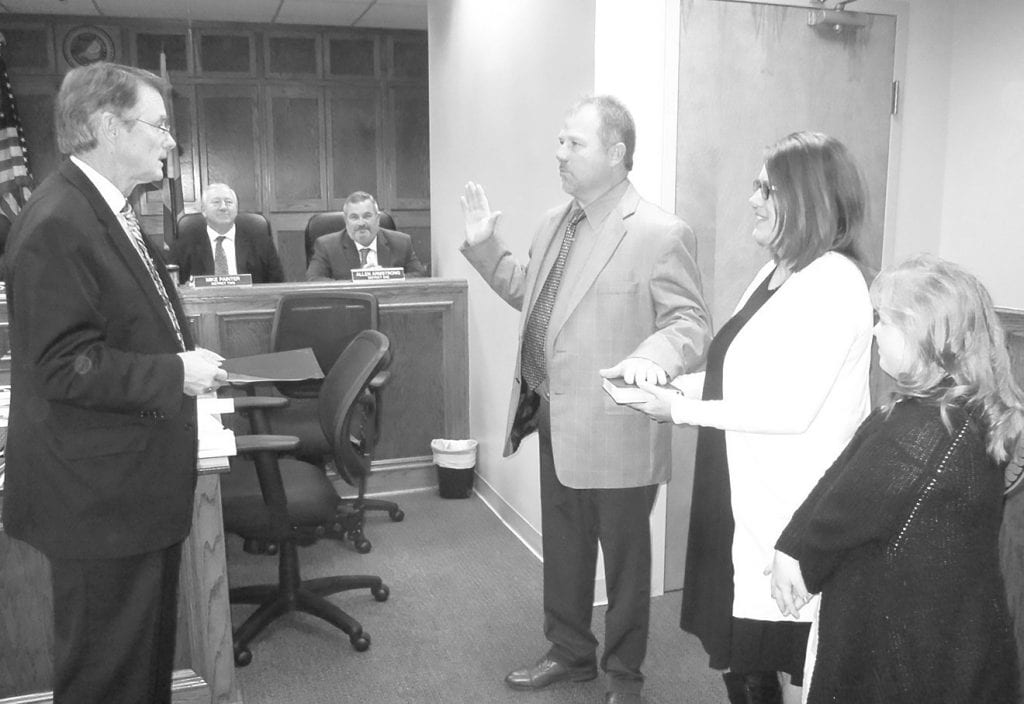 As a fourth item, the commission approved a contract amendment with NCIC – an inmate communications system vendor – to allow installation of a video visitation system at the Blount County jail. Using the system, family members of inmates can visit with their relatives using their cell phones or computers, without having to be present at the jail. Resolutions

Two separate resolutions recognized District 1 road crew employees Glennis Best (35 years) and Randy Jones (36 years) for their dedicated service to Blount County on the occasion of their retirement. Best served many years as the district foreman. Jones anchored the road crew serving under five different county commissioners. Both men take with them an encyclopedic knowledge of road savvy, and repair and resident history. 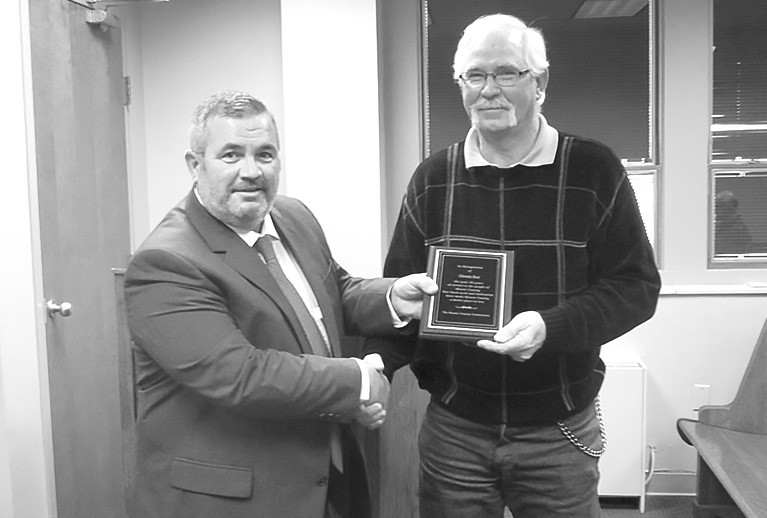 District 1 Commissioner Allen Armstrong, left, presents Glennis Best a plaque of appreciation for his 35 years of service to the county. Best served in recent years as District 1 road crew foreman.

A third resolution proclaimed the week of Nov. 16 – Nov. 22 as Farm City Week in Blount County in recognition of the dual role of producers and distributors of agricultural products played by farmers and merchants.

Two resolutions specify the vacating of county roads, in the absence of public objections: Berry Road, located off U. S. 231 north of Summit, and an unnamed road connecting County Road 51 and Bullard Road near Mountain Grove. 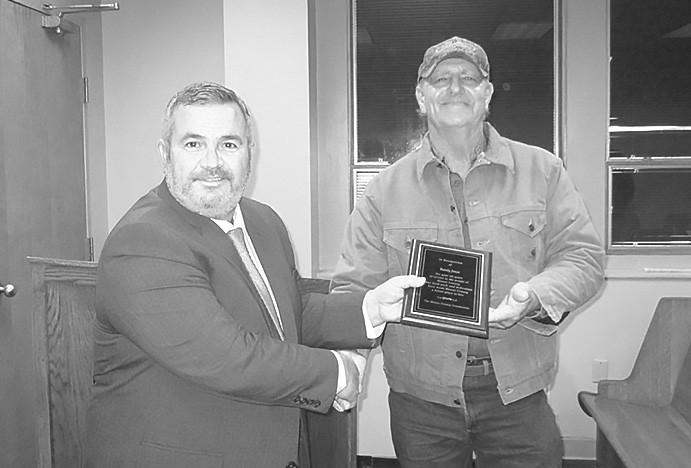 Allen Armstrong, left, presents Randy Jones a plaque of appreciation for his 36 years of service to the county. He served District 1 residents under five different county commissioners.

• appointed Chuck Lacks to the Palisades Park board to fill the unexpired term of Mitsy Stewart, set to expire in September 2020.

• postponed until the December meeting consideration of hiring an HVAC certified technician, an apprentice, and a journeyman electrician.

• approved a budget amendment to shift the balance of $11,092 in the Animal Adoption Special Donation Fund to the incidentals budget line item.

• designated as surplus a District 1 2004 Chevrolet truck and authorized the county administrator to dispose of by best means possible.

• mentioned but put off consideration of reported odors from a dog food plant drifting into west Blount County from outside the county; to be considered when District 1 Commissioner Allen Armstrong is present.

• approved the placing of a “Purple Heart Tree” in the courthouse at Christmas, as requested by veterans organizations. Quorem and future meetings

A quorem consisting of Commissioners Mike Painter, Dean Calvert, and Nick Washburn was present at the business meeting, along with Commission Chairman Chris Green. Commissioner Armstrong was present for the early part of the meeting, then excused himself for another appointment.

The next commission work session will be Tuesday, Dec. 4, at 9 a.m.

The next commission business meeting will be Monday, Dec. 10, at 9 a.m. Both will be in the commission board room at the courthouse in Oneonta.

The courthouse Christmas lunch, sponsored for county employees by Brunson, Barnett, and Sherrer law firm will be held Tuesday Dec. 11.