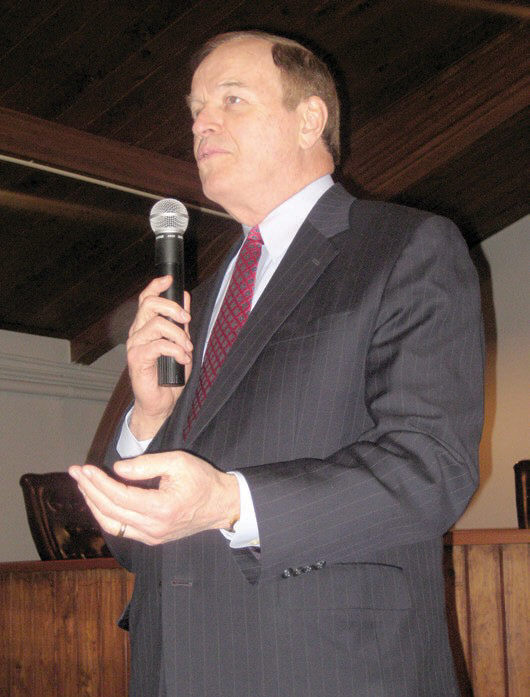 “You can’t give a stress test to something that doesn’t have a pulse. Some of those big banks are the walking dead and we ought to close’em.” – Sen. Richard Shelby

“We’re a nation headed down the road to financial destruction. If we load our nation up with debt, we’ll undermine everything we believe in, and our grandchildren will not have the opportunities we’ve had.”

So saying, Richard Shelby, senior senator from Alabama, kicked off his town meeting at Oneonta’s city hall last Friday afternoon and summarized much of the discussion that followed. Much of Shelby’s opening talk and most of the questions that followed it centered on the state of the national economy and Shelby’s warnings on actions taken by the new Democratic administration to bolster it.

Shelby noted that, as a country, it took the United States 200 years – until 1982 – to accumulate its first trillion dollars in debt. He then noted that the country incurred over $700 billion in debt last fall with the financial bailout and another $800 billion last week with the stimulus package. That’s another trillion-and-a-half dollars of debt, and prospects are the government may borrow another $2 trillion to pour into various emergency packages in the coming two years, he said.

“I’d like to see’em do well, and they could,” Shelby said, speaking of General Motors. He said they should drastically slim down, starting with cutting “about half the management force.”

“General Motors could go through Chapter 11 bankruptcy and it would save the company. We ought to force them to do it,” he said.

Shelby, former chairman of the Senate Banking Subcommittee, directed much of his criticism to the ailing banking system, beginning with an explanation of his opposition to the stimulus bill passed by Congress two weeks ago.

“I opposed the stimulus bill,” Shelby said. “It’s not going to turn the economy around. I believe what’s going to do that is to get our banking system straightened out. Spending another $350 billion with no accountability and no strings attached is not going to do that. I don’t believe taxpayers should bail them out. Straightening out the banks won’t cure everything, but it’ll help.”

Shelby said many banks in the country are still sound, including many smaller, local banks. He said it is megabanks that have jeopardized the economy by unsound and greedy loan practices such as bundling loans that were unsound to begin with into investment packages, then reselling these “toxic” packages to other investors.

Can’t give stress test unless there’s a pulse

“They talk about givin’em stress tests,” Shelby said, referring to plans to determine whether banks have adequate capital and limited bad debt so as to be able to pass bailout capital into the economy in the form of loans – before receiving infusions of bailout money. “You can’t give a stress test to something that doesn’t have a pulse.

“Some of those big banks are the walking dead,” Shelby said, referring to the magnitude of bad debt they hold. “We need to merge’em or close’em.”

Shelby identified the passage of the Community Reinvestment Act a decade ago as the start of major problems in the banking industry. He said the act required lending institutions to make loans based on community development imperatives, without respect to borrowers’ ability to repay the loans.

“I tried to repeal that act,” Shelby said. “I received a letter signed by 216 economists, including Nobel prize winners, saying that that wasn’t the thing to do. I failed. I don’t think banks ought to make loans on any basis other than the ability to repay that loan.”

The town meeting featured an unusually active question and-answer session, with questions covering over 30 minutes. Below is a sampling of them.

Q: Will the stimulus package help the economy?

A: “Marginally. I’m afraid there’s a lot of mischief in it, aren’t you? We haven’t even read all of it yet. There were 1100 pages in it last week and they’re still writing it. There are political ramifications hidden in the stimulus package, and we haven’t discovered them all yet.”

Q: Are infrastructure projects good or not?

A: Shelby said infrastructure projects such as rebuilding roads, bridges, rails and the electric grid are sound and will create jobs, but that the effect on the economy is not immediate. As a measure to revive the economy, it will help some in the long run, but not for a year or more.

A: “Yes, but not this year or probably even next year. But once the world economy cranks back up, inflation will be just around the corner.”

Q: Are our savings in local banks safe?

A: “Yes, your savings are safe up to the $250,000 guaranteed by the Federal Deposit Insurance Corporation. If you’ve got more than that, you can put them in different accounts or banks.”

A: “If you’ve already got it or are about to get it, you’ll be fine. You young people (addressing some 50 students from Oneonta High School in the audience) don’t ever count on it. The Republicans aren’t going to fix it, and the Democrats aren’t going to fix it. It’s probably good for about another 25 to 30 years.”

Q: With the Democrats in control of both the legislative and executive branches, how can you slow down the accumulation of debt for these bailout and stimulus packages?

A: (You’re right that) “…with the Democrats in control, you’re going to see a trend to a bigger role for government, and the specter of nationalization. There are 41 Republicans in the Senate. If we stay together, we can control some of that. I was proud of our House Republicans. They all voted against the stimulus package. (It passed anyway.) In the Senate, three Republicans – two of them from Maine – abandoned us and it passed. Without them it wouldn’t have. But I’m afraid those three Republicans are going to continue to abandon us. I just hope the Republicans can come up with a new face before the next election – a young Ronald Reagan.”

Q: Is there any hope for bipartisan cooperation in getting the economy back on track?