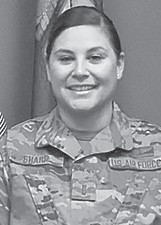 Janele Sharp was promoted Sunday to second lieutenant in the Alabama Air National Guard. Sharp is a 2004 graduate of Hayden High School and received her bachelor of science degree from Jacksonville State University in 2008.

She enlisted in the Guard in 2012 as a KC-135R Boom Operator and served overseas in multiple deployments. Throughout this time, Sharp earned master’s degrees in public health and business administration from the University of Alabama at Birmingham. She was recently selected as Health Services Administrator for the 117 Medical Group at Sumpter Smith ANG Base in Birmingham and will serve there as a commissioned officer.

‘A very good budget’New clinic in townFour days a week