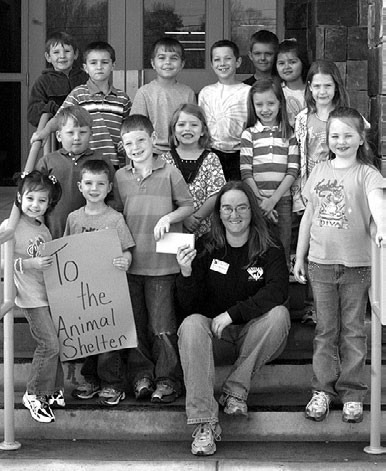 Hayden Mann, second-grader at Susan Moore Elementary School, had a unique party for his seventh birthday.


He heard on the news one night about a “puppy mill” and all the dogs that had been mistreated. He asked his mother, Jill Smallwood Mann, 7th-grade teacher at SMES, what would happen to the dogs. She explained they would be taken to animal shelters and with luck would be adopted by loving families. Still concerned, he wanted to know more about how the shelters could feed and care for so many animals.

Hayden thought much about the dogs and decided to have his friends bring donations for an animal shelter instead of gifts to his own birthday party. The enthusiastic children’s gifts totaled $150.

Jill Mann wanted the children to present the donation to the shelter instead of just to her son. Representatives from St. Clair Animal Shelter volunteered to come to the school so all the children could participate in giving the donation. Hayden and shelter representative Melissa are shown in the accompanying photograph with donating children, listed in no particular order: Anna Marie Mann, Matthew Clay, Lily Owens, Ethan Walker, Grace Battles, Ashlyn Floyd, Abby Floyd, Jacob Owens, Isaiah Kemp, Seth Misenhimer, Abbott Dempsey, Evan Priest, and Rylee Priest. All are SMES students. Hayden’s birthday was Feb. 3.