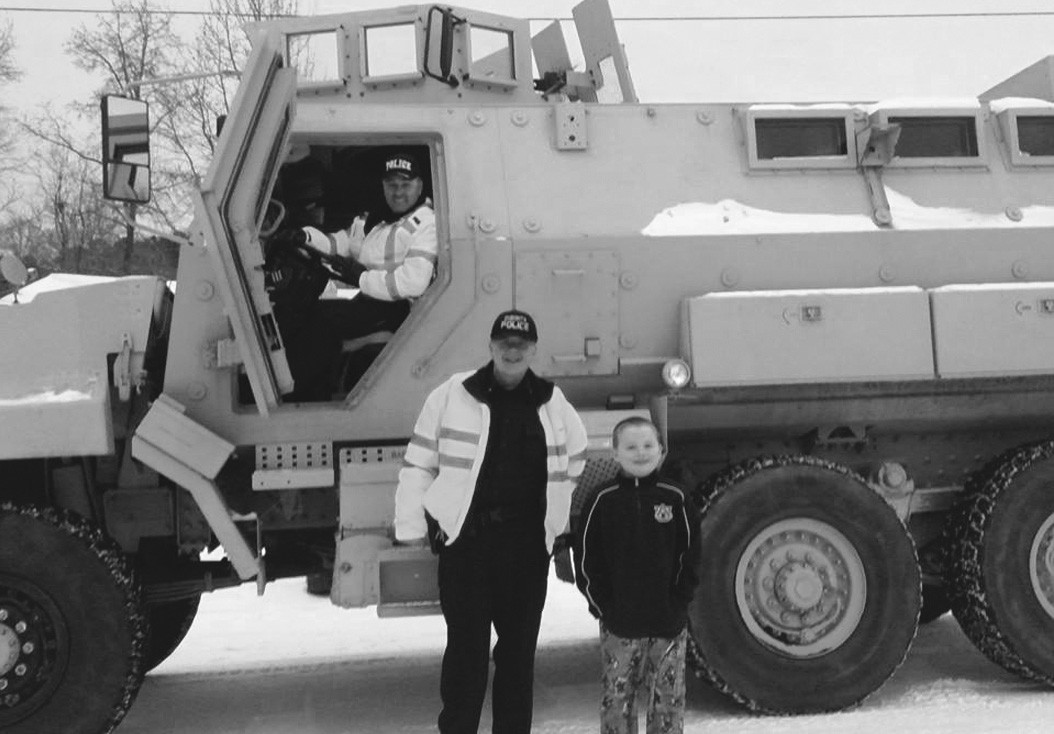 It’s an MRAP. M-Rap. Stands for Mine Resistant Ambush Protected vehicle. Driving the ride is Oneonta patrolman Mike Harris. Helping show it off is patrolman Scott Evans, assisted by son Matthew. The vehicle helped withstand an ambush last Tuesday, in the form of a stealthy, sneak-attacking winter snowstorm. It’s on loan to the Oneonta Police Department. It was used to transport children home when one bus failed to complete its appointed rounds in last week’s winter surprise.

Former county leader Charles Carr had a favorite dictum, pronounced at least once a month at every Chamber of Commerce breakfast, “By working together, we make an already very good community even better.”

It isn’t heard as often these days, but never was the proof of that pudding more apparent than last Tuesday, when multiple agencies and volunteers came together to assure that roughly 10,000 students (more than half bus riders) in the two county systems got home without any unfortunate incidences and without a single student having to spend the night at school – in contrast to the experience of other area systems.

Of course, the parents who made their way to the schools on short notice during the day were responsible for a majority of that success. But not all could make it. Between the two systems, an estimated 200 students had to be delivered to their homes by a team consisting of law enforcement officers, first responders, county commissioners, school personnel using their own vehicles, and assorted volunteers (in addition to several hundred kids who made it home more or less uneventfully on city system buses.) Who, what, when, where, and especially how?

Resources were not so much of a problem as coordination: deciding who to get to go where, when to go, who to pick up, where to take them, how to get them there, and how to get back as soon as possible, in some cases, for another pickup.

Here’s roughly how the day shaped up, according to Blount County Supt. Jim Carr’s careful notes. (Any errors or fuzziness in this timeline are the reporter’s, not Carr’s.)

9:30 a.m. The two superintendents (Carr and Oneonta’s Scott Coefield) met at the courthouse with city, county, and emergency management agency officials to discuss the predicted “dusting” that was rapidly becoming a blizzard. It didn’t take long to conclude the weather forecast was wrong and becoming more so by the minute. But blame wasn’t the name of the game at that point. Responding to and averting an impending crisis was.

10 a.m. The decision was made to close the schools. Car drivers (students who drive to school) were released to go home. County school officials began debating the risks of running the school buses on the highways to return students home. It took only a glimpse of the traffic snarls along Ala 75 right in front of the county central office to confirm that those risks were considerable.

11 a.m. The decision was made that county buses would not run, and parents were notified to pick up their children at school. Meanwhile the city system, with less territory and fewer students to manage, released their buses to take students home. All except one bus made it, and Oneonta Police Department officers completed delivery of students for the one that didn’t.

1 p.m. All Oneonta City Schools children were safe back home by shortly after lunch, according to Coefield. For Blount County schools, it wasn’t so simple. By 2 p.m., it became apparent, Carr said, that substantial numbers of parents were going to have difficulty making it to school to pick up their children. That’s when the coordination began, and by 3 p.m., Sheriff’s deputies, school resource officers, county commissioners, emergency management employees, and school personnel were enlisted and dispatched to provide transportation to students (and some teachers) needing it. At first, it looked like there might be as many as 100 or more children at each school needing a ride. By later in the afternoon, Carr said, it had worked down to a considerably smaller number who would actually need to be taken home. So the team worked the coordination plan for the next four hours, and by 7 p.m. the last child had been delivered safely.

“Our ability to get everybody home in a short-notice situation like this was the result of a number of agencies working closely together,” Carr said. “That’s the great thing about being in Blount County. You can always depend on each other in a time of need. I want to extend my sincere thanks to all those agencies for their cooperation in assisting us.”

Carr said he cannot recall a single other time in his 11 years as superintendent when county buses were grounded.

Coefield echoed Carr’s thanks, singling out the Oneonta Police Department and the system’s bus drivers for a great job.

“If I had waited even 20 minutes longer, I would have had to ground the buses,” Coefield said. “In my 25 years in this career, that’s the quickest that weather has ever moved in on us without warning.”