Scoping out the gun law 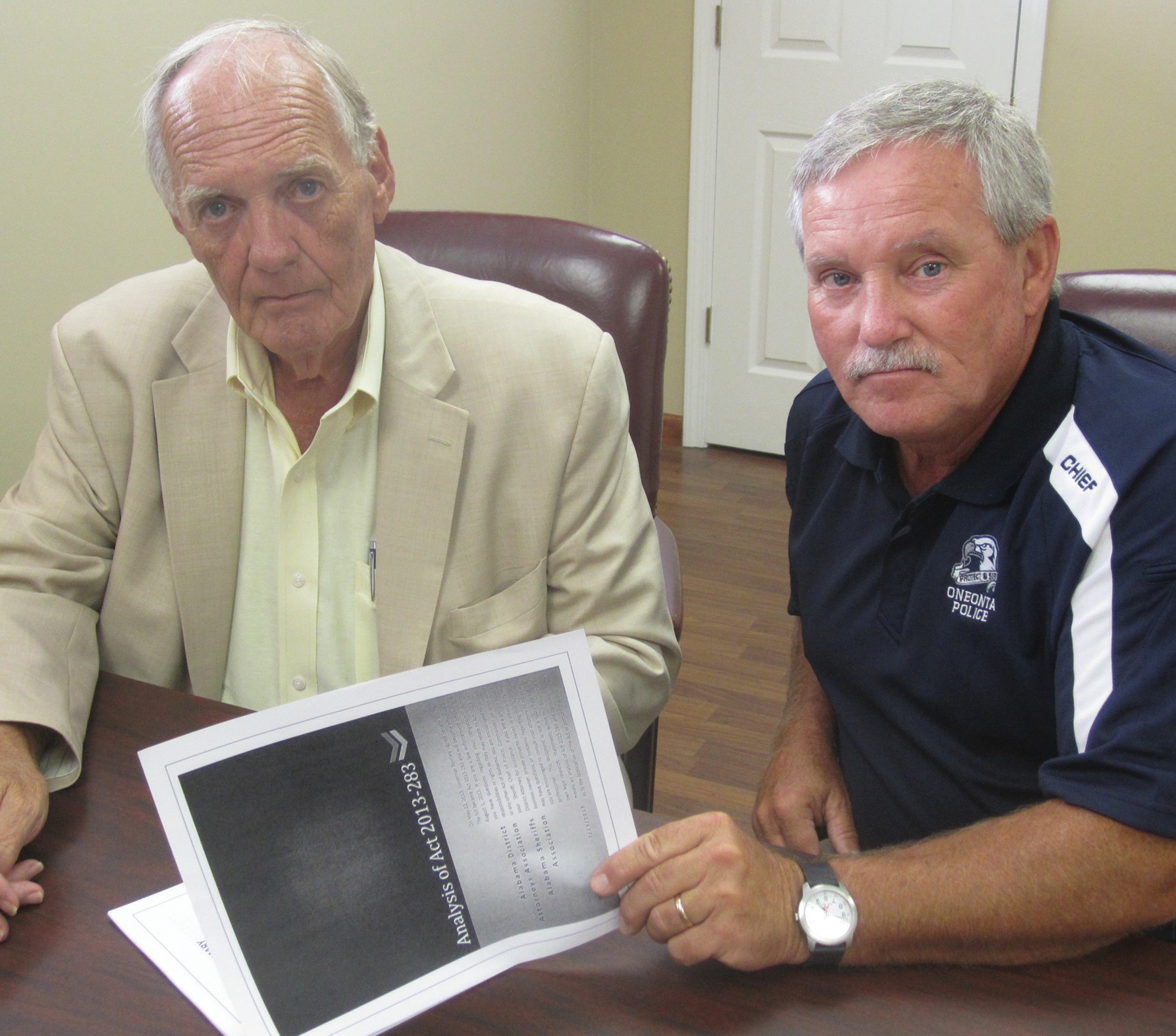 Initially perceived as a significant change in rights associated with bearing arms, more deliberate consideration of its provisions – including a day-long seminar conducted jointly last week by the Alabama District Attorney’s Association and the Alabama Sheriff’s Association in Montgomery and attended by more than 450 law enforcement officials statewide – has led to the conclusion that not a great deal has changed in the day to day operation and enforcement of the law – except the level of initial confusion involved.

That was the thrust of The Blount Countian’s joint interview Monday with Blount County Sheriff Loyd Arrington and Oneonta Chief of Police James Chapman.

One thing that will change: signage reading “Firearms Prohibited,” “No Guns Allowed,” and similar language will be posted more widely than previously as schools, agencies of government, business owners, and some private individuals post their property to notify the public of their policy concerning bearing arms on premises that are under their ownership or control. The notification applies to both openly carried and concealed weapons, in other words to firearms for which a permit has been obtained, and to those carried openly in a visible holster.

To sumarize succinctly the law as it now stands:

•Citizens may openly carry firearms without a permit on public – but not private – property.

•Citizens with a permit to carry a concealed weapon may carry it on public property and on private property unless the property owner or manager has signs clearly and conspicuously posted indicating that firearms and/or other weapons are not to be brought upon the premises. If such signage is absent, carrying a concealed weapon for which the bearer has a permit is allowed.

Schools City and county public school superintendents have been notified by the State Department of Education that existing public school policies banning firearms and other CONTINUED FROM FRONT PAGE weapons on school property are not affected by the adoption of the Alabama Gun Law. Superintendents of Blount County school systems used almost identical words to state their system’s policy.

“Weapons are forbidden on any and all of our sites and property,” said Oneonta Supt. Scott Coefield. Signs will be posted and weapons won’t be allowed. Anyone entering school property with a gun will be asked to leave, and if they don’t, law enforcement will be called.”

“Guns and a number of other weapons are prohibited on all school property,” said Blount County Supt. Jim Carr. “We’re not tryng to challenge anyone’s right to bear arms. We’re just concerned about the safety of our kids. We’re trying to create and maintain an environment that protects our children, and that’s one where there are no guns.”

City property Municipalities are still in the process of deciding exactly what property to post and how to post it. The Gun Law specifies fireams are prohibited in any “building in which a city counsel is currently having a regularly scheduled or specially called meeting.” Still to be determined, according to city manager Ed Lowe, is whether to post the entire city hall including the administrative side of the building, or just the council chamber. He said decisions on prohibiting guns at cityowned recreation parks have yet to be made, but he is inclined to think that signage forbidding firearms will be posted at those places. Other municipalities, though not contacted for this article, may be presumed to be going through similar decision processes.

County and other property where firearms are specifically forbidden by the Gun Law:

•inside a courthouse, courthouse annex, district attorney’s office, or building where a county commission or city council is having a regularly scheduled or specially called meeting.

•inside a prison, jail, halfway house, corrections facility, or other detention facility.

•on the premises of a facility providing care for psychiatric, mental, or emotional disorders.

•relating to the general public: businesses may by law post their property forbidding the carrying of firearms on their premises whether carried openly or concealed with a permit.

According to the Gun Law, the firearm must be unloaded and stored out of sight in a locked compartment in the vehicle in an area not immediately accessible to the driver or any passenger. Summary comments

Sheriff Loyd Arrington: “There’s not going to be much real difference from the Gun Law. Probably 99 percent are going to use their common sense about guns and they’ll be fine. You’ll always have that 1 percent who don’t and cause the problems. We had them before the Gun Law and we’ll have them still.”

Police Chief James Chapman: “It (the new Gun Law) changes very little as far as the police department is concerned. As long as people are carrying openly, very little changes for us.”

There has been no increase in permit requests as a result of passage of the new Gun Law, Arrington said.