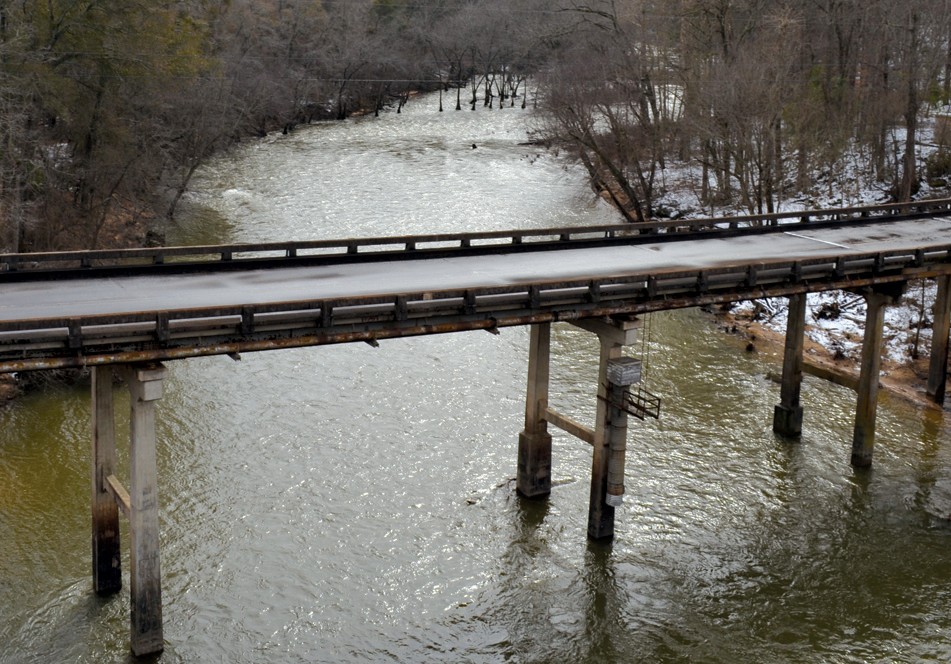 The view from the U.S. 231 bridge at Cleveland will be enhanced with a scenic overlook and a pedestrian walkway across the bridge.

The Blount County Commission voted Monday to apply for an Alabama Department of Transportation (ALDOT) Alternative Program Grant for $400,000 to convert the old U.S. 231 bridge over the Locust Fork River at Cleveland into a tourist destination. Closed to traffic when the new ALDOT bridge was completed just a stone’s throw away downstream, the bridge would be converted into a scenic overlook for viewing the river and a lighted pedestrian walkway across the river, with an accompanying parking area along the right of way.

The location already provides public access to the river. It is anticipated that the scenic development will stimulate further development of the area for canoeing and perhaps other forms of recreation. The river itself has recently been designated a part of the Alabama Scenic River Trail System. A long range goal is to stimulate further development of tourism by taking advantage of the Locust Fork River, one of the county’s inherent natural resources which has not been fully realized in the past.

In connection with developing the bridge, the commission passed a resolution expressing support of the project and allowing Chairman Chris Green to execute the agreement with ALDOT to transfer the bridge to county ownership. The resolution is the final step in the commission’s action taken in late 2013 in which it agreed to accept ownership and maintenance of the structure from ALDOT. However, the agreement is pending signatures of the ALDOT director, the Secretary of State, the Governor, and at least one other state official. As part of the agreement, the county will also receive from the state a $658,000 credit toward its $11.4 million in major connector paving projects. Garbage removal bid awarded

The commission awarded the bid for garbage removal in districts 2, 3, and 4 to Republic Services, with a bid price of $14.98 per month for residential garbage removal for one garbage container. The bid represents a reduction of $1.65 from the current monthly rate of $16.63.

The business rate bid by Republic was higher than that by Advanced Disposal, the only other bidder, but county attorney Scott Barnett said that businesses are not mandated to use Republic at the county bid rate. They can negotiate their own rate with Republic, with another waste removal company, or remove their own waste by other legal means, he said.

On the recommendation of county attorney Scott Barnett, the commission also authorized a bid for garbage collection services in District 1, emphasizing that bid specs will be written to emphasize that the level of services performed must be equivalent to those currently and historically received. Improvements to Maple Drive and Joy Road

The commission passed a resolution authorizing the commission chairman to enter into a construction contract with Whitaker Contracting Company to undertake paving improvements to Maple Drive and Joy Road in District 2 for $589,814 and $89,504 respectively. The projects are largely covered by a $758,814 Community Development Block Grant in connection with the 2011 Tornado Disaster Recovery Program. Whitaker was the low bidder on the projects. School bus turnarounds

•held a public hearing at the beginning of the business meeting to report on the results of the bid for solid waste collection in districts 2, 3, and 4. Public comments were requested; there were none.

•approved the request of the county administrator to tint windows in the commission office to reduce the heating effect of the sun on those offices; windows on both the southeast- and southwest-facing walls of the courthouse will be tinted at an estimated cost of $7,300 to reduce the load on the air conditioning system, thereby reducing power costs.

•appointed Sheree Reeves, District 1, to replace Palisades Park Board member Marsha Beam, who resigned before the expiration of her term in October 2016.

•authorized the commission chairman to sign an agreement with the U.S. Geological Survey to install water flow monitoring equipment to the U.S. 231 bridge at Cleveland, subject to the supervision of the county engineer.

•approved a $1,114 invoice for renewal of insurance coverage for volunteer county workers for one year, to be split between the commission and the jail.

•appointed EMA director Don Roybal as the point of contact for the Federal Emergency Management Agency (FEMA) and the Department of Homeland Security.

•approved the request from Blount County Children’s Center to sponsor a table for $250 at its annual dinner April 29; to be paid from contingent fund 002.

•approved rental of two portable toilets for $150 for the annual yard sale on Ala 132; to be paid from tourism fund 223. Budget amendments

•Engineering department, for sale of fixed assets via sealed bid: $4,028 for five vehicles.

•renewal of the ADEM permit for Ingram chert pit at a cost of $1,155 for five years; diligent efforts will be made to complete reclamation efforts on the pit as soon as it can reasonably be done, without further permit renewals.