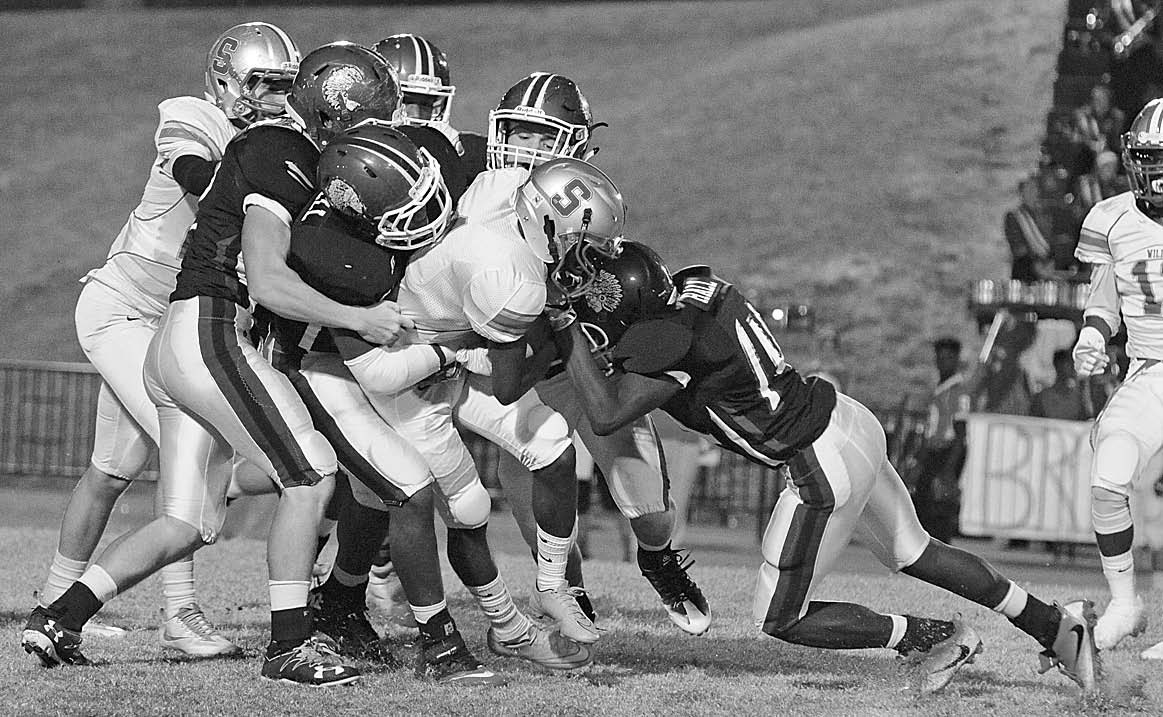 The Redskin defense stops a Saks running back.

The Saks Wildcats rallied from an early 14-0 deficit to earn a 27-24 victory over Oneonta last Friday night to knock the Redskins out of playoff contention.

The Redskins got touchdown runs of 80 and 4 yards from Colton Walker to take a 14-0 lead midway through the first quarter.

However, Saks responded with a pair of touchdowns and the game was tied 14-14 at the half.

The Wildcats took their first lead late in the third quarter on a 5-yard run by Marquette White blocked the extra point to keep the score 20-14.

The Redskins cut the margin to 20-17 on a 19-yard field by Tyler Thomas in the late stages of the third quarter.

Saks appeared to ice the game on a 55-yard touchdown run by Johnathon Cobb on the opening snap of the final quarter. The extra point put the Wildcats on top 27-17.

Oneonta finally answered midway through the fourth quarter when Ferris Phillips hit Jaden Kent with a 70-yard touchdown pass. Thomas added the point-after and the Saks lead was just 27-24 with 5:44 to play.

Unfortunately, the Redskins couldn’t muster enough offense on the final possession of the night.

The Redskins were balanced on offense with 179 rushing yards and 126 through the air. However, it wasn’t enough to overcome a Saks offense that pounded out 386 of its 468 yards on the ground.

Walker rolled up 185 yards and a pair of touchdowns on 24 carries while Phillips was 8 of 18 passing for 116 yards and a touchdown.

White caught five passes for 33 yards while Kent had two catches for 74 yards and a score.

Eighth-grade linebacker Beau Ragsdale led the Redskin defense with 14 tackles while Kent had 13 stops. Kevin Crim had 10 tackles, two for loss, and a sack.