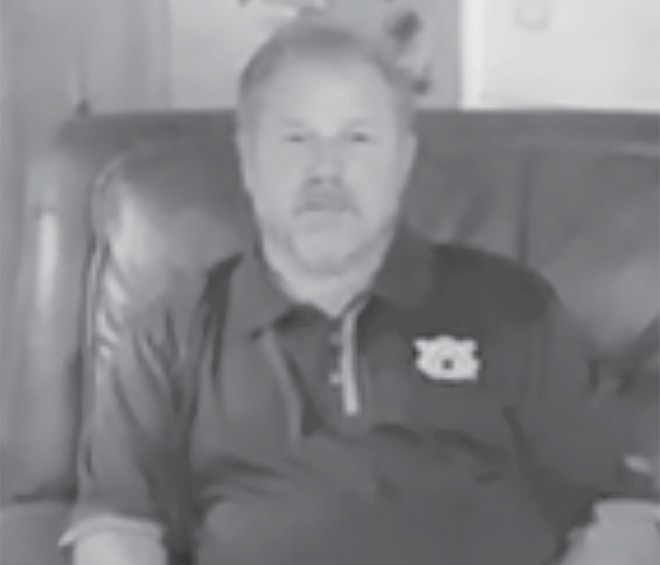 A police officer’s messy divorce has created a vortex that has swept up two Blount County commissioners in a storm that includes a recording with a racist slur along with many sexist and misogynistic remarks, and threatens to jeopardize a nearly half-million dollar yearly contract between the Blount County Sheriff’s Office and the Birmingham Water Works Board.

The recording was first sent, along with an anonymous letter, to many Blount County officials and multiple media outlets. It is a dash cam video with a date stamp of Sept. 12, 2019, and includes a telephone conversation between a Warrior police officer and someone he refers to several times as “Dean.” At one point, “Dean” says, “Them <plural of the N-word> is just throwing them together,” referring to homes being built by an African-American contractor. The conversation is also littered with sexual discussions about women.

The recordings include numerous derogatory references to someone named “Nick” and that conversation centers around a breach of trust that the officer and “Dean” believe “Nick” committed, referring to their belief that “Nick” had disclosed some harmful information to the officer’s wife. At one point, a woman named “Tonya” is named as “Nick’s” secretary, referencing some work she had performed for “Nick.” District 4 County Commissioner Nick Washburn has a secretary named Tonya.

Near the end of the recordings, the officer exits the vehicle and is clearly seen in the video.

The officer’s wife filed for a divorce in Blount County on Sept. 24, 2019, and it was finalized one month later, according to court documents. On June 18, 2020, the officer petitioned the court for modification of the original settlement as well as other requests. In subsequent court filings, the ex-wife references the recordings and states, “The motivation for the Father’s anger toward the Mother stems from the fact that the Father had recorded himself having inappropriate and, in at least one instance racist, conversations with a Blount County elected official.”

Two weeks ago, the chairman of the Birmingham Water Works Board, Ron Mims, told The Blount Countian that he was “sickened” when he listened to the recordings and heard “Dean” use the N-word so “casually.” The board contracts with the BCSO to provide around-the-clock protection 365 days a year at one of its major reservoirs, Inland Lake.

Sheriff Mark Moon told TBC the loss of the contract would be “devastating,” because many of his deputies rely on the extra income. They currently earn $30 an hour and can work up to six eight-hour shifts per month. Many earn around $1,440 a month through the contract. Blount County Commission Chairman and Probate Judge Chris Green spoke with Mims Friday and said he felt like “we recemented the relationship between Blount County, the Blount County Sheriff’s Office, and the Birmingham Water Works Board. I don’t think we will face any problems now or in the future that we can’t work out.” The Birmingham Water Works Board meets at 11:30 a.m. today to further discuss this issue.

Thursday, District 3 County Commissioner Dean Calvert posted a Facebook video which he offered as an apology. In the video (screenshot above), Calvert continued to state that he nor anyone else knows if he’s the person in the recordings, but apologized anyway. The video was removed by the next evening, but can still be viewed on the Alabama Political Reporter’s website at www.alreporter.com/2020/09/04/county-commission-association-president-elect-apologizes-for-racial-slur/.

Calvert was the president-elect of the Association of County Commissions, but according to the APR, he resigned that position late Thursday evening. Calvert confirmed that resignation to TBC Friday. Asked why, he responded by saying, “The state level is a lot different than the local level. I’m not going to drag the state [association] through the situation — the association struggles anyway — for some of my bad decisions that I’ve made on my off time.” He would not elaborate on his “bad decisions.” He also still would neither confirm or deny he is the “Dean” in the recordings. “I’ve made my apology. Just go on Facebook and see that.” Last week he told TBC he did not know if he was the person on the recordings.

Judge Green adamantly spoke out against misogyny and racism. “I think any statements of racism or sexism are always inappropriate. I say that as the father of two daughters and the grandfather of a granddaughter.” He added, “Some of the finest people I know in this county are African Americans and Hispanics.”

The complete dash cam recording can be found on YouTube at www.youtube.com/watch?v=9AzP7SIBM40. Please use discretion, though. The language is graphic and profane.