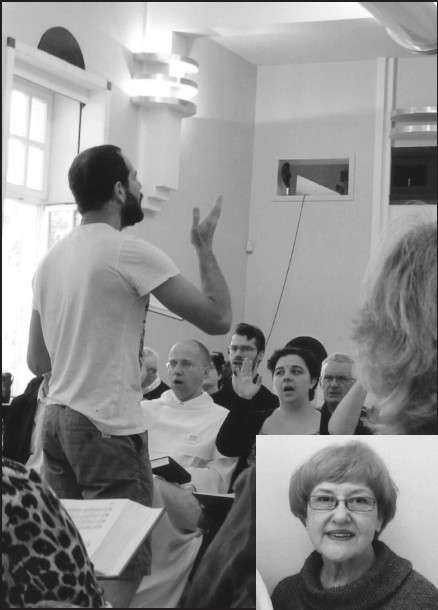 What next? Sacred Harp diplomacy? Ophir Ilzetzki, an Israeli citizen, directs a Sacred Harp song featuring the line, ‘I am on a journey to the new Jerusalem.’ Though Jewish, he is fascinated with the deeply Protestant Christian Sacred Harp music – to the point of telling Linda that he would like to hold a Sacred Harp singing school and convention in Israel. Who could have seen that coming? (Blount Countian Linda Thomas, who took the photo, appears in the inset at bottom right.)

Sacred Harp (also called “fa sol la”) singing is a vocal music style held over from Colonial times in the United States. It gradually died out in the North, never really reached the west, but was preserved in the rural South – notably north Alabama – until the latter part of the 20th century. Then, catalyzed mainly by small groups of rural singers where the tradition lingered, it made a remarkable comeback on the national stage. Even more recently, it is experiencing a surge of interest in Europe, especially England, where it originated in the 1700s.

Women singers from the United States assemble during a night singing session in Chmielno, Poland.

Linda Thomas, a lifelong Sacred Harp singer, is one of the preservers of the tradition, participating in everything from old-time singing schools to innumerable local singings to the Henagar assembly that recorded the Sacred Harp theme music for the Hollywood movie “Cold Mountain.” For the events described, she served as an expert singer for students to model themselves upon and gain experience singing with an accomplished ensemble.

That’s the framework within which this story unfolds. It’s about a singing school in Chnielno, Poland, – not greatly different in practice from those held at many small churches in the rural South where children were taught to sing using the distinctive shaped-note style of the Sacred Harp songbook. The venue in Poland was a bit more upscale: a picturesque resort reminiscent of a Bavarian inn where some 60 participants from 11 countries met with six instructors for the four-day “Fa Sol La Europe” music camp. Daily teaching classes were followed by nightly singing sessions in which daily lessons were translated into practical experience.

The group then adjourned, almost en mass, and travelled to Warsaw for the two-day Third Annual Poland Sacred Harp Convention there. Stories from those two events abound – the camp and the convention – most with an international flavor and cast. An event representative of the entire experience occurred when, during a single one-hour session, 20 individuals representing 10 countries led songs, reflecting the traditional practice of rotating song-leading responsibility among singers, with each conducting one to three songs.

The double-barreled event was organized and led by David Ivey of Huntsville, cofounder of the Sacred Harp Musical Heritage Association. The association sponsors two camps in Alabama to preserve and perpetuate Sacred Harp singing: an annual youth camp at Camp Lee in Anniston and an annual adult camp at Camp McDowell near Double Springs. Those interested in further information about Sacred Harp singing and the activities of the association may access its website at fasola.org.

So, why is it called Sacred Harp, the uninitiated might ask? The term refers to the human voice, the musical instrument all receive at birth.

In addition to being a fully-fledged Sacred Harp preservationist, Linda Thomas is married to former District 34 State Rep. Elwyn Thomas, who represented Blount County in the state Legislature from 1998 to 2012. They live on Straight Mountain. She is also the senior and founding member of Blount County’s Three Generations gospel trio, made up of herself, daughter Teresa Ratliff, and granddaughter Jordan Ratliff.