Read this, it might save your life; better still, take the course 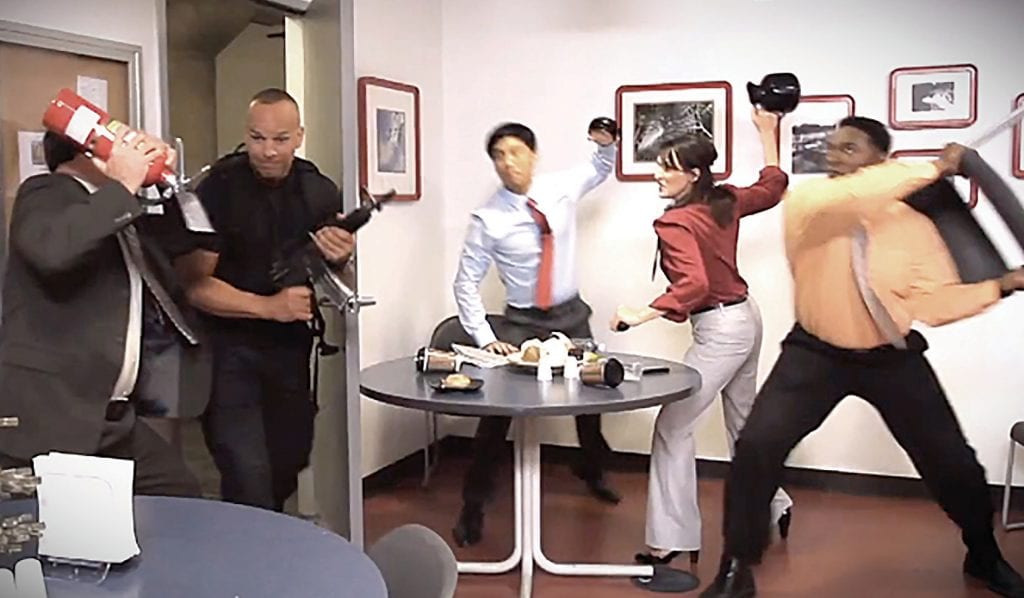 Etch this tableau in your mind. These ‘victims’ are obviously not defenseless. Even trapped in a room, there are likely to be plenty of weapons available, and you’ll outnumber a lone shooter by X to one, where X is the number of people with you. Note: the guy with the raised fire extinguisher would do better to spray the shooter in the face with it as he struggles to come through the barricaded door, followed by a 4-to-1 pile-on to incapacitate the blinded shooter. -courtesy Alabama Department of Homeland Security 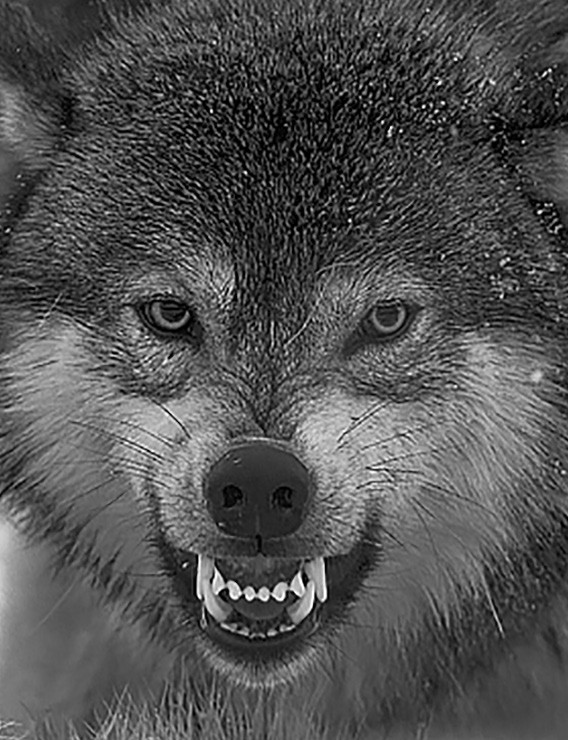 Think of yourself as a wolf: cunning, conniving – vicious, if cornered.

It can’t happen here. Wrong. Wrong. It can and there’s a finite probability that it will. A mass shooter can strike at the very threshold of hearth and home: at school, at church, at an outdoor event, in a restaurant, on the highway. Believe me: it’s happened twice at schools in or near my hometown.

Forget dreading and trying to forget. Get prepared. That’s the purpose of “Run, Hide, Fight” training, offered to all groups large and small by both the Blount County Sheriff’s Department and the Oneonta Police Department. Below is a sneak preview of what it prepares you to do. If nothing else, take note below of the basic instructions it contains.

Better still, take the training. The basic presentation is an hour-long, longer if class members ask a lot of questions. The training is more intense than this article can be. To combat an active shooter, you need active training.

The purpose of the course: to show you how to improve your chances of surviving a mass shooting attack. First and best choice: run away from the sound of gunfire, if you can. Second choice: hide out of sight of the gunman, if you can’t reasonably run. Third, if you’ve got no other choice: fight back (attack).

First principles: (1) Always have a plan. (2) Become actively aware of your surroundings at all times. (3) Wherever you are, formulate an impromptu escape plan, in case you need it. If you’re inside a room, identify the exits, and your shortest routes to them. If that doesn’t look promising – or even if it does – identify an adjoining room, closet, or other enclosed area where you can flee and secure it from entry by the gunman – or if nothing else, notice places you can hide to take cover from a swarm of bullets, while you consider your next move.

Think of yourself as a wolf: cunning, conniving – vicious, if cornered. Forget sheep to slaughter. You’re a dangerous animal and you’re in survival mode. Work on that mindset, and prepare yourself mentally and physically to act on it if you have to.

If you hear gunfire and it’s:

• at some distance away – run in the opposite direction from the gunfire.

• close to you and getting closer – hide in a room and secure the door (this is where training will help in ways you never imagined).

• at close quarters, you see the gunman, and your life is in immediate danger – ACT. Try to incapacitate the shooter – throw objects at hand at him, or as a last resort, charge the shooter and disrupt him, especially if there are others with you who can help you physically overpower him; your chances of survival are greater if you gang up on him, get the gun away from him, or at least interfere with his ability to aim and fire.

• outside your office, stay there, lock and/or barricade the door.

• in a hallway near where you are, get into a room and secure/barricade the door.

If you’re in an active shooter situation, call 911 as soon as you can safely do so. Tell the operator the location of the shooter; the number of shooters, if more than one; the type of weapon used; the number of people threatened; and the best physical description you can give of the shooter, if possible.

When officers arrive, remain calm and follow their instructions; raise your hands and spread your fingers; keep your hands visible at all times; don’t ask officers for instructions, and don’t approach them – just move quickly in the direction they’re coming from.

Handy weapons: “One of the best weapons is a fire extinguisher if you can find one in the room or hallway nearby and you’re in a close encounter with the shooter. It has a range of about 15 or 20 feet, and spraying him in the face will disorient him long enough for you and others to rush him and subdue him,” according to Oneonta Police Department corporal and training officer Steve Adamson. Nearly as good is a can of wasp spray, Adamson said. He didn’t say this, but it’s a triple threat weapon. It has good range and the spray itself can be blinding, it’s handy for throwing if you’re too far away for the spray, and it can be used as a club for up close and personal work.

Blount County Sheriff’s Department operations officer and trainer Tim Kent says the department has trained more than 5,000 people since the course was introduced in 2014. That includes all teachers in Blount County schools, who relayed it to their students. Adamson says he conducted about a dozen sessions in 2017.

Remember: be aware of your surroundings at all times, and have a survival plan of action for every environment you find yourself in. Better still, take the “Run, Hide, Fight” training as soon as you can.

Last word goes to Kent: Why take the training? Because “the life you save may be your own,” he said.