Ruminations from the legislative delegation 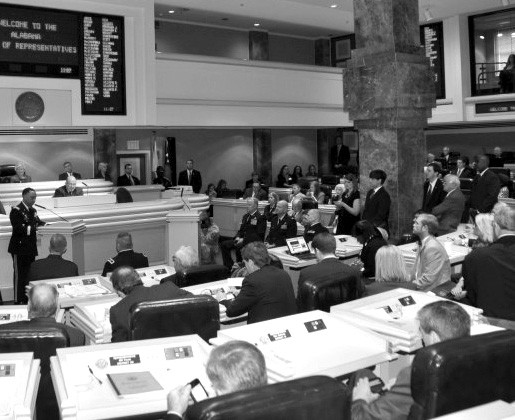 The floor of the Alabama House of Representatives during one of its orderly periods.

Legislators are expecting a hectic time this week in Montgomery as the session moves toward its end-ofmonth conclusion. Major, controversial issues still remain to be debated and resolved, not least of which is Sen. Del Marsh’s bill proposing a state lottery and expansion of gambling as sources of revenue to cure the state’s budget woes.

Marsh began the discussion last week by releasing an economic study by Auburn University-Montgomery showing a possible $400 million in revenue could be produced by a combination of a state lottery and taxes associated with expansion of gambling. He promised delivery of a draft bill this week, provided he thought support would be sufficient to pass it.

Based on reports last week, it is expected to contain three components, requiring a vote of the people on a constitutional amendment to (1) create a statewide lottery, (2) expand gambling to include slot machines and table games at four state racetracks and tax the gaming proceeds, (3) negotiate with Poarch Creek Indians on taxing proceeds at their three electronic bingo casinos, which are not currently taxed by the state.

The Blount Countian polled the Blount County delegation Monday to gauge their inclinations toward the bill and their estimates of how it will be received by their colleagues in the Legislature. None had seen the draft copy of the bill, since the Legislature didn’t convene for the week until Tuesday. Here are their responses, in the order we spoke to them.

“At this point, I only know there are several members who will support the proposal as it stands now, and several who are against it that may filibuster it. In my opinion, it won’t go anywhere in its present form. I won’t vote for it.

“From what I’ve heard from my constituents, if the people voted on it, I think the lottery portion would pass. But it won’t solve our money problems. On negotiating with the Poarch Creeks, the Indians will want to expand gambling in any discussions with them.

“Another problem is that gambling doesn’t generate a lot of money for the state. A lot of it goes to costs of administering it. It doesn’t solve our money problems and it creates too many other problems of its own. If the Senate voted on it today, it would fail.”

“State government should look at fixing its budget first before looking at potential new revenue streams. I don‘t think gambling is the solution to Alabama’s issues in the General Fund. If we voted on Sen. Marsh’s proposal today, I don’t think it would pass the House. I wouldn’t vote for it.

“Legislators must first look at balancing the budget and un-earmarking funds in order to cut the waste and fix the broken budget problems.

“In Alabama, we have two separate budgets, one for education and then the General Fund. Right now, we can’t actually move the money over to meet our needs. There is a $250 million surplus in the education fund, and being able to access the surplus is a logical, efficient solution.

“I’ll vote against gambling and against raising any taxes. I think it’s irresponsible when you have a $250 million surplus to ask for more revenue. We just need to untie our hands.”

“I’ve had numerous people contact me and say they don’t have a problem with the idea of a lottery. If there’s a way to tax Poarch Creek gambling without expanding it, I could support that. I think that could be made palatable to people as long as it was restricted to Poarch Creek land.

“But I’m afraid of expanding casino gambling because of questions it poses about what it would do to the state. I don’t think expanding gambling on any level is the way to go.

“The (Marsh) proposal would not pass the House in its present form. I would like to see the lottery proposal as a separate item. I think we need to continue concentrating on ways to cut bureaucratic costs in the agencies in Montgomery – not cuts that will result in reducing services to Alabamians, like state troopers which we don’t have enough of anyway, state parks, and other services citizens want and need.”

“I think the Legislature is open to looking at proposals. Remember we haven’t seen Sen. Marsh’s draft bill yet. My own position is that I’m opposed to using gambling to fix the state’s budget problems. I think a good many members of the House are. It’s too early to tell whether it (the Marsh proposal) could pass in its present form if we voted today. If we were given just the option of gambling or new taxes, gambling might be seen as the lesser of two evils. But, it would mean the House would have to vote for a constitutional amendment. That would require 63 votes. That’s a pretty tough number to get.

“This could be a pretty big expansion of gambling. I’m not willing to do that. We have to be careful. In other states that have allowed gambling to get too strong, the gambling interests now control elected officials in those states.

“I think there are several proposals yet to come on the budget. I think we’ll see a combination of things in the end: efficiency measures, revenue measures, maybe measures involving the Poarch Creeks. I think we’re getting close to the point where it’ll all come together.”

“I don’t think the Marsh plan will fly in the Legislature, if it’s as we’ve heard. There’s some support for the lottery, and maybe for the Poarch Creek part of it. I don’t think the lottery is a solution to our budget problems, but I wouldn’t mind allowing people to vote on it. On the expansion of gambling, there’s concern that it would open the state too much to all kinds of gambling.

“The main thing is that we don’t need to rush into something like this. We have to be very careful, because when you get in a hurry, that’s when mistakes are made and you can get very bad legislation. The Legislature may be looking at a special session or two at the end of the regular session, and I don’t think that’s necessarily a bad thing. It gives you time to do the job right.

“Let’s all remember back when the Birmingham horse track was proposed as a solution for raising revenue, stimulating the economy, saving Jefferson County, and so on. Not only did the horse track fall into bankruptcy, we saw corruption, convictions, litigation, and the largest public bankruptcy in the nation. Gambling was not the solution then, and it is not the solution now.”

“I think the lottery has a better chance than gambling. I personally oppose the lottery. It’s not a good way to fund government. But I’ve heard from a lot of people who want to vote. I’d vote to let the people vote. Just remember, 80 percent of lottery proceeds go to payout for prizes and administration, and you’re creating another state bureaucracy besides – at the same time we’re trying to reduce bureaucracy in government.

“On gambling, I don’t favor expanding gambling. The Poarch Creek casinos – I wish we could figure out how to tax them. We should tax them. I’m opposed to any expansion of gambling at the dog tracks. The costs associated with it are huge. It won’t help with our fiscal problems, and it will cause a lot more issues, especially with poor children, whose parents will spend money on gambling instead of taking care of their children.

“The sentiment of our caucus is that we have a lot of housecleaning yet to do. I’m proud to see the Senate looking at all the options to cut costs. I’m pleased at how seriously the membership is taking it, how thorough they’re being by vetting everything.”