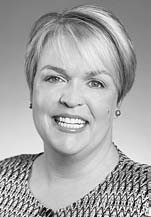 District 13 Rep. Connie Rowe of Jasper, who represents a small part of west Blount County, was named last week by Gov. Robert Bentley as one of six nominees for Sen. Jeff Sessions’ Senate seat, in the event he is confirmed as Pres. Donald Trump‘s attorney general. In a conversation with The Blount Countian, Rowe said the Governor plans to announce his final selection this week.

Rowe said her selection came as a surprise, though she has worked with the Governor on several matters since her election in 2014. To a question about how she feels at the prospect of walking into the political meat grinder that is Washington, D. C. , should she be chosen, she replied:

“An important part of serving in any position like that is that you’re most successful when you walk into it knowing who you are and being comfortable with it. I don’t have any real reason to expect I’ll be chosen, but if I am, I have no fear of it. I know I’m capable of communicating with people both there and back here. I can do that.

“There could not be a more exciting time to be a member of Congress than the first 100 days of a new presidency. But I won’t forget that I’m from a rural county in Alabama. It’s who I am.”