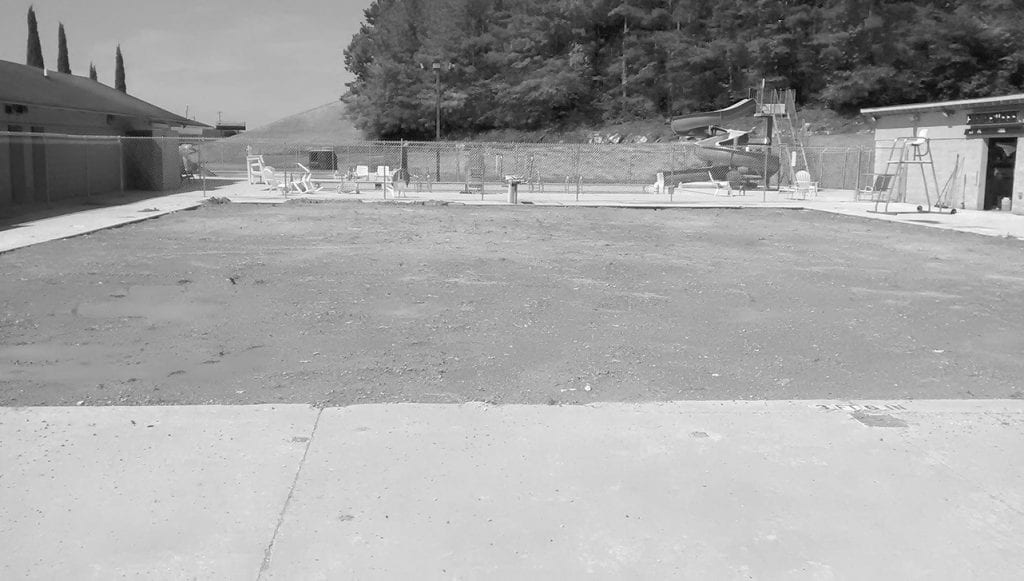 What was once the municipal pool has been filled in with dirt following an accident in which a vehicle was driven off into it. Oneonta Mayor Ross Norris explained, during a recent work session, that the pool already had leaks and problems as it sat above an underground spring.

In other matters, councilwoman Tonya Rogers presented a report from the Oneonta Fire & Rescue Service. Rogers said the report was a summary of runs for the first half of the year. According to Oneonta Fire Chief Kenneth Booth, the department is “well on our way to exceeding last year’s run total by a significant margin. We ended last year with 1,594 runs and as of today we are already over 1,200 with almost five months left to go.”

Chief Booth continued, “We are several months into a major smoke alarm installation campaign and are in the process of putting together another weather radio giveaway. Our Community Risk Reduction Division continues to draw the attention of not only citizens in our community, but has also drawn attention nationally with our social media safety messages.”

At the request of Oneonta City Manager Ed Lowe the council approved awarding a $37,000 grant to Bull Construction for work on Robbin’s Field Airport. The council also approved repair work do be done on Dogwood Drive under a FEMA grant. Lowe said the project will be bid at a later time.

City attorney Alex Smith recommended that the council join a class action under the law firm of Bearden & Bearden of Guntersville who are filing suit against the manufacturers and distributors of opiod drugs. He said there would be no cost to the city to join the suit. Councilman Phillips made the motion, seconded by councilman Robinson to join the legal action and the council approved Smith’s request.

Smith also reported that OTELCO’s cable TV franchise for the city had expired and OTELCO had failed to renew it. He said that once it expired, the service had to be rebid again. Smith said he would get with the city manager to draw up the necessary papers and the council could take up the matter at a later time.

Joining Rogers, Phillips, Butler, and Robinson at the council meeting were Mayor Ross Norris and councilman Hal Blackwood. The council’s next meeting is Tuesday, August 27, at 5:30 p.m.

The possibility of soccer fields, a splash pad, and a new pool were the main topics of discussion in a recent joint work session of the Oneonta City Council and the Oneonta Park and Recreation Board.

In opening the discussion, Oneonta Mayor Ross Norris said the council needs to look at what needs to be improved and replaced.

Oneonta City Manager Ed Lowe said the city has several options, the first of which is to decide what projects the city wants to pursue and then look at the funding.

After further discussion, the council appeared in agreement that finding suitable property on which to locate the projects should be the first priority.

There are now more than 400 kids playing soccer. Two fields are needed and a site must also be found for a pool and splash pad if the city decides to proceed with their construction.

Mayor Norris explained that the old pool was losing a lot of water before a vehicle ran off into it. He explained that there is an underground spring which had messed up the pool liner to the point that it would have cost more to repair, in addition to the accident repair, than to locate a new site and build a new pool.

“The pool itself was going to have to be torn out anyway,” he added.

Councilman Richard Phillips said an engineer needs to be brought in to assess any potential site so that the error of locating in the wrong location or over another spring will not happen again.

“We need to find a site first,” he added.

Emily Moore with the Oneonta Park and Recreation Board said the public is not happy because they were led to believe a pool or splash pad was going to be ready for the summer 2020 outdoor season.

Councilman Hal Blackwood asked the board what their number one need is and Oneonta Park and Recreation director Kevin Nicodemus said “more fields and bathrooms.”

Phillips raised the question of viable locations and three were mentioned – land in the Oneonta Industrial Park, land across from Walmart, and property at the Agri-business Center.

Councilwoman Tonya Rogers said a short term fix might be use of land at the Agri-Business Center and try to get access to the restrooms.

The council agreed that additional work sessions should be held to try and speed up the process and move the planned projects forward.