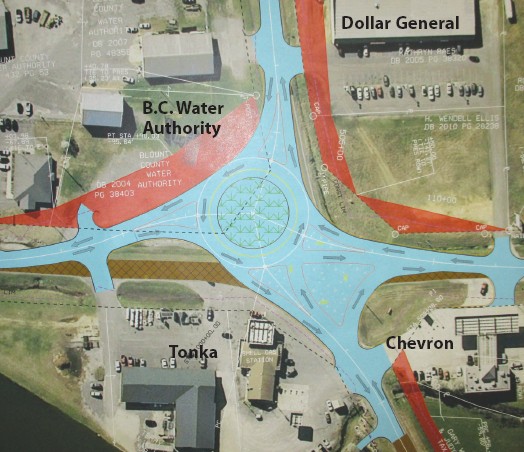 The Alabama Department of Transportation (ALDOT) has proposed a project to construct a roundabout at the intersection of Ala 79 and Ala 160 in Cleveland, according to a public meeting held at the Cleveland Community Center on Aug. 11.

A roundabout, according to material provided by ALDOT is “a type of circular intersection. (See diagram). Traffic flows in one direction – counter clockwise – around a raised center island. There are no traffic signals or stop signs. Drivers yield to traffic already in the roundabout. An apron is part of the design which accommodates vehicles of all sizes, including buses, semi-trucks, and trailers.”

Roundabouts are a common feature of highways in England and elsewhere in Europe, but, until recently, the design has been little used or known in this country.

Center, conducted for about two hours in open house format week before last. Little or no opposition was expressed as far as he could determine, he said. Jones said the roundabout will be a new feature for Alabama highways and that the one at Cleveland will be one of the first, though probably not the very first, in the state.

Asked his opinion of the design, Jones commented, “I’m in favor as long as it doesn’t interfere with surrounding businesses, but if it does, I’ll have to reconsider. Cleveland’s only source of revenue is its businesses, and if it affects them, it affects us.”

However, there is opposition, some of it strong, to the design. Jim Mason, owner of Mason’s Tonka Shell Station at the 79/160 intersection, is one who doesn’t mind speaking out.

“It’ll totally kill my business,” he said.“I’m more affected than any other business at this intersection. I estimate it will take out 50 percent of my business. It’ll choke off my traffic flow of 18-wheelers and boat-towing traffic almost completely. They’re not going to want to deal with the maze they’ll have to go through to get to my property. I know. I used to drive trucks.”

Mason said access to his station will be limited to an entry off Ala 160. Southbound traffic on Ala 79 would have to go almost all the way around the roundabout to enter his property. Northbound traffic on Ala 79 would have to turn onto Ala 160 going toward Cleveland in order to access his Shell station. Mason said the access off Ala 79 that appears to serve his property is actually a right-of-way for Tonka Supply, a separate business adjoining his station.

“This is something we don’t need,” Mason said.“We’ve had no fatalities at this intersection as it is, and there’s no problem with traffic flow here either. They’re proposing to do away with something that works fine, and going blind into an experimental English roundabout. It’ll ruin my business. I employ about 20 people here, and if my business fails, those people will lose their jobs.”

Mason said other business owners as well as others in the community have reason to oppose the roundabout as well, though they have as yet to make their voices heard.