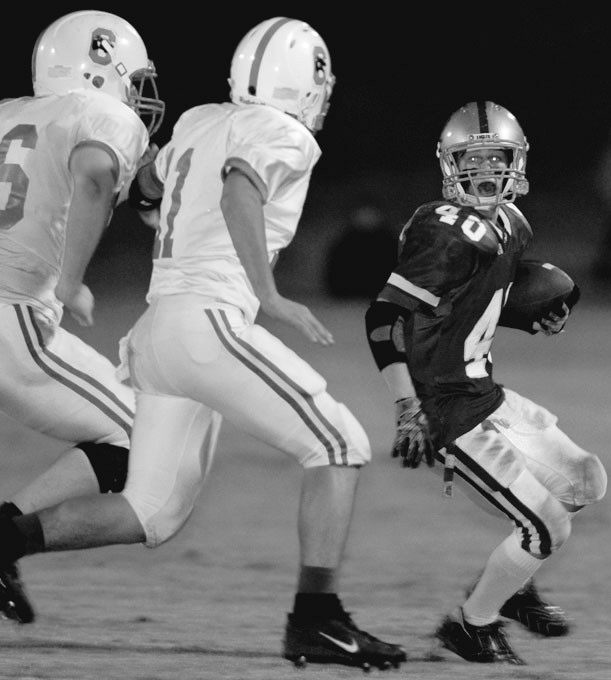 Three of the four Blount County teams that made the playoffs have advanced to the second round. Two of the three – Appalachian and Susan Moore – will again play at home while Oneonta will be on the road this week.

Oddly, all three Blount County teams carry 9- 2 records into the second round. Odder still, all three teams face opponents that are also 9-2 on the year. 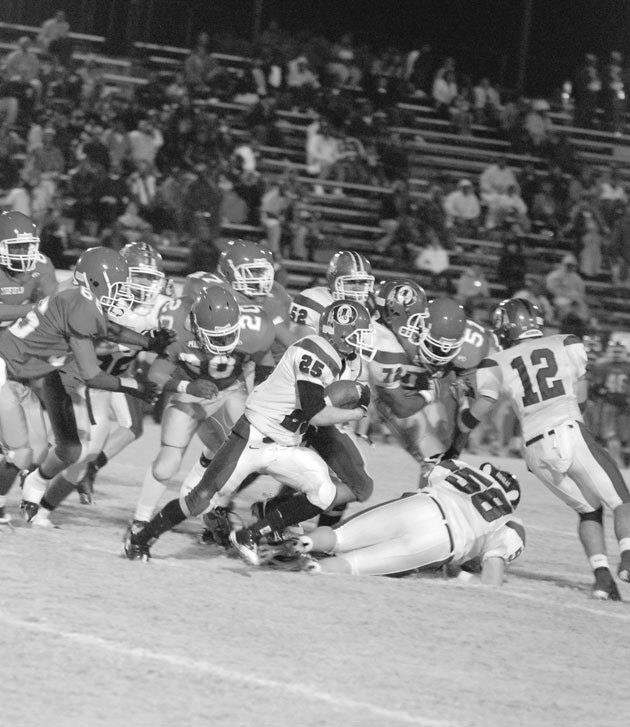 Good news for the Eagles – last week’s win was the school’s first playoff victory since a 20-0 shutout of Bibb Graves in the first round in 1992. Bad news – next up is Cedar Bluff and Appalachian is 0-10 all time against the Tigers.


Cedar Bluff is a solid football team with a little bit of everything. Jonathan McWhorter’s Tigers have a nice mixture of size and speed and are coming off one of their best games of the year – last week’s 42-7 annihilation of Victory Christian. The Tigers are the No. 2 seed out of Region 5 and have played good football just about every week. The Tiger offense is a spreadbased system and Cedar Bluff is capable of running and throwing the ball, depending on what the defense gives them. However, the first key to slowing down the Tigers is controlling the Cedar Bluff running game. Cedar Bluff running back Skylar Boswell (5’10, 175-lbs. Sr) returned against Victory Christian after missing two weeks with a hip injury and he paced the offense with 135 yards and a touchdown on 19 carries. Quarterback Kyle Crane (5’9, 160-lbs. Jr) can throw the football when he has to and completed 9 of 17 last week for 115 yards and three touchdowns. Tyric Scales (6’3, 180-lbs. So) is a dangerous receiver. The Tiger offensive and defensive lines have decent size (avg. 210 lbs.) and thoroughly dominated Victory Christian last week. The Tiger defense had some problems against Gaston’s high-powered running game but teams that don’t have balance on offense have struggled against Cedar Bluff. The Tiger special teams have been very solid.

Appalachian had no trouble moving the ball against Collinsville last week but the Eagles struggled to finish drives and hand onto the football. That won’t get it done this week. Appalachian needs to establish the run early, something that was not easy to do last week, and then use the pass when the Tiger defense comes up. The backfield duo of Colby Harvey and Coty Tawbush must make plays early and, if they are successful, then the running of fullback Tonny Strickland and the passing of Jeremy Hill will be that much more effective. The Eagle offensive and defensive fronts have to play well this week. Cedar Bluff has dominated average teams but have been pushed a bit by good teams. Appalachian must win the battle along the line of scrimmage on offense and must get penetration on defense. Cedar Bluff has weapons throughout the skill positions. The Eagles must do a good job tackling to limit the big plays. Seth Black and the Eagle front need to do a good job against the speedy Boswell, who appeared to be 100 percent last week against Victory Christian. Appalachian special teams have been solid but need to be very good this week.

Next week – An Appalachian win means the Eagles will travel to either Gaston or Spring Garden.

Piedmont has been very solid almost every week of the season, with only the blowout loss to powerful Leeds in week eight standing out. The Bulldogs are a solid team in every phase. The offense is led by quarterback Chase Childers (5’10, 175-lbs. Jr) who has made plays through the air and on the ground. In last week’s win over Sardis, Childers rushed for 143 yards and completed 14 of 19 passes for 228 yards and two touchdowns. Stopping him, or at the least slowing him down, will be the focus for the Susan Moore defense this week. He has several weapons to choose from in the Bulldogs’ spread offense and it’s an offense that, while based in the spread, had rather run than throw. This is a Piedmont offense that put up 558 yards last week against Sardis. The Piedmont offensive line has played well throughout the year and this is a unit with some size (avg. 220 lbs.) and experience. Only Leeds was able to really control the line of scrimmage against the Piedmont offensive front. The Piedmont defense played very well last week and held Sardis to 198 total yards (the Bulldogs held Sardis to just 213 yards in week eight). The Piedmont defense operates out of a 3-4 look with a 240-lb. sophomore noseman in the middle and good speed and athletes around him. Teams with speed (Cherokee County, Tarrant, Leeds) have been able to make plays but the Bulldogs have been tough on average offenses. Piedmont special teams are average.

Susan Moore got off to a very rough start last week and if the same thing happens this week it’s probably time for basketball. The Bulldogs simply must play well early because Piedmont is more than capable of getting out to a big early lead and never letting Susan Moore back in it. The Susan Moore offense sorely missed the injured Blake Weaver last week and it wasn’t until the second half that the offense started making plays against the gritty Pleasant Valley defense. Justin Hawkins had a very good game and a spectacular second half. The sophomore will need to play well again this week but the Bulldogs need to help him, especially in the running game. Hawkins had 71 yards on nine carries but the other backs combined for 27 yards on 13 carries. The Bulldog passing game could cause some problems for the Piedmont defense, especially if the Susan Moore offensive line has a good night. George Purpura and Trey Parsons have been able to make plays each week and it’s doubtful that Piedmont will be able to shut them down. The Susan Moore defense was not bad last week – Pleasant Valley had 234 yards on 62 plays, just 3.8 yards per play. However, Piedmont has more skill and speed and Childers has the potential to make plays when the design breaks down. The Bulldog defensive front must play hard-nosed, disciplined football and keep Childers from getting out in the open field. A big play from the Susan Moore special teams would be an added bonus this week.

Next week – With a win this week, Susan Moore would host either Leeds or Sylvania.

It’s a rematch of a game played just four weeks ago at Alexandria when Oneonta came from behind to win. The Redskins are 3-2 all time versus the Valley Cubs, including a 36-20 win over the Cubs in the 1972 semifinals.

In the first game between these two, Oneonta trailed 14-0 at the half and rallied in the second half for the win. Hunter Dickie plucked a Valley Cub fumble out of the air and rumbled 35 yards for the final points but Alexandria didn’t go away. The Valley Cubs hit on a big pass play and had four shots at the end zone from the Oneonta 10 in the final moments of the game but came up empty.

The Redskins went to Midfield last week, stumbled early, and then slowly took over against the talented, highly-ranked Patriots. Now, it’s time for a rematch with an Alexandria team that has been wanting a little payback. Oneonta had a decent offensive game against Alexandria back on Oct. 17. The Redskins picked up 316 yards of offense and outscored the Valley Cubs 27-0 in the second half. However, the Redskins also turned the ball over twice in the first half in Alexandria territory and then struggled picking up a first down late in the game after taking the lead. The Redskins need to get off to a good start against Alexandria and that means taking control of the line of scrimmage. Alexandria is not small but the Redskin offensive and defensive fronts will have a bit of a size advantage. Casey O’Toole was solid in last week’s win at Midfield and was able to make plays in big spots. He did the same thing to Alexandria in the second half when he completed 8 of 11 through the air 89 yards and three touchdowns. Nolen Smith had a big game last week but he was held in check by Alexandria in the first game and finished with just four receptions for 35 yards. The Redskin defense turned up the pressure from the second quarter on last week and dominated Midfield but this unit was torched for a season-high 478 yards at Alexandria. The Valley Cubs were able to run the ball for 252 yards and passed for 216 yards. The Redskin front must control the Alexandria running game or this game could be another shootout.

The Valley Cubs have cranked up the running game the last few weeks and that means that Terrell Stewart has been leading the way. The speedy Stewart (5’10, 180-lbs. Sr) torched Haleyville last week for 301 yards and four touchdowns on 28 carries last week and has now gone over the 1700-yard mark on the year. He is a real difference-maker and needs just a crease to make a big play. Stewart is dangerous but he might not be the most important player on this side of the ball. Senior quarterback Ethan Vinyard (6’0, 170-lbs.) is the glue of the unit and has made plays throughout the last three years, both as a runner and as a passer. Oneonta must get pressure on him and not let him be the difference in the game. Hunter Kelly (5’11, 175-lbs. Jr) is the most dangerous receiver for the Cubs and he had a 59-yard reception late in the first game that gave the home team a chance for the win. The Valley Cub offensive and defensive lines are not flashy but very solid and have the ability to own the line of scrimmage. The Alexandria defense has not been dominating and Haleyville and Cleburne County have been able to make plays the last two weeks. Alexandria has given up several big plays on the year but not to Oneonta. The Redskins were forced to earn everything they got in the first game and that’s what the Cubs will look to in the rematch. Alexandria special teams are solid but the coverage units have broken down at times this year.

Next week – With a win, Oneonta would either