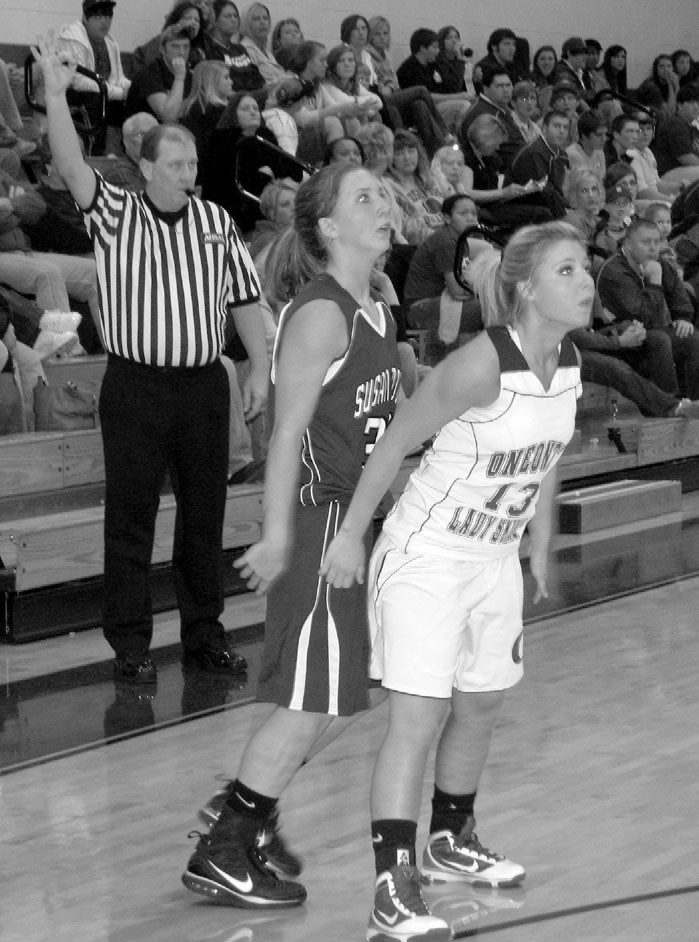 –courtesy www.southernexposurephotos.com Susan Moore’s Hannah Holmes and Oneonta’s Laura Short eye the flight of the ball after Holmes had launched a 3- pointer.

The two best girls teams in the county suffered tough losses on the road last week. 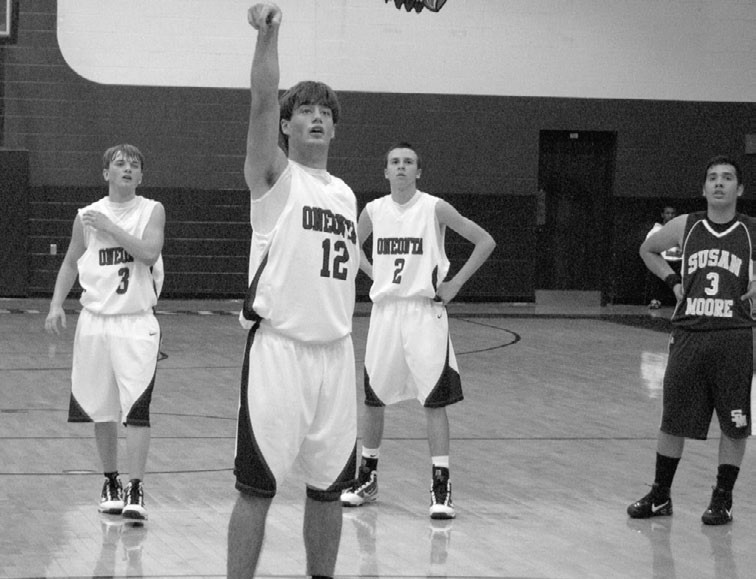 The 2A Lady Panthers streaked out to a 24-4 lead after the first quarter and never looked back in a decisive win over the Lady Saints. Cleveland head coach Glenn Puckett got production from everyone as every player on the roster scored.

The Panthers jumped out to an 18-6 lead after one quarter but St. Bernard outscored the visitors 11-4 in the second quarter to trail jus 22-18 at the half.

Cleveland outscored the Saints 19-15 in the third quarter to lead 41-33 at the final break and then exploded for 26 points over the final eight minutes to get the easy victory.

Cleveland (4-1) was led by Thomas Horton with 14 points, Caleb Woodall with 12, and Chas Cornelius with 10. Every player on the Cleveland roster scored. at Susan Moore Girls
Susan Moore 64, Sardis 57 OT

In the 3A Area 13 opener, the Lady Bulldogs led throughout but a 15-12 advantage over the final eight minutes for Sardis forced overtime.

In the extra frame, Sardis appeared to have the advantage after Hannah Holmes and Kaylie Bullard fouled out. However, big 3-pointers by Faith Newton and Kaitlyn Williams and excellent free-throw shooting by Williams led the Lady Bulldogs to the victory.

Sardis was led by Lauren Hall with 21 points and Whitley Towns with 18.

Susan Moore (8-1, 1-0; ranked No. 10 in 3A) got 17 points and four rebounds from Bullard to go with 16 points, five rebounds, and five steals from Williams. Holmes added 14 points, four assists, and four steals. at Locust Fork Girls
Locust Fork 45, Oneonta 33

The Redskins raced out to a 21-9 lead after the first quarter and enjoyed a 44-22 lead at the halftime break.

The Hayden Lady Wildcats had blasted their way through the pre-area schedule. However, the 5A Area 11 opener was a different story.

Erwin, led by Alabama signee Khristian Lee, led throughout and pulled away late for a convincing victory.

The home-standing Eagles built a 21-2 lead after the first quarter and rolled to the easy victory.

Falkville came into the game 0-8 on the year but the Lady Blue Devils didn’t play the first quarter like a team still looking for its first win on the year.

The Panthers then outscored the visitors 16-10 and 12-7 over the final 16 minutes for the win in the 2A Area 13 opener for Cleveland.

Sissy Green led the Panthers (4-3, 1-0) with 16 points and seven rebounds while Jessi Holder had 13 points, five rebounds, and five steals. Rachel Taylor had a double double with 12 points and 10 rebounds. Boys
Cleveland 71, Falkville 45

The host Panthers led 32-17 at the break and then buried the visiting Blue Devils 23-8 in the third quarter to coast to a win in the Area 13 opener.

Laura Short hit a six-foot shot from the right baseline just before the final buzzer to give the Lady Redskins the win in a game that went back-and-forth throughout the night.

Oneonta seized a 11-8 lead after the first quarter but Susan Moore led 21-19 at the half. Oneonta reclaimed a 34-29 lead after three quarters.

Oneonta raced out to a 26-11 halftime lead and never looked back in an easy 22-point win over the visiting Bulldogs.

Oneonta (5-0) got a tremendous effort from senior guard Trevor Sanders. He connected on 10 of 12 shots from the field and 7 of 9 from the free-throw line to finish with 27 points. He also collected 12 rebounds and seven steals. Cory Glasscock added nine points while Nolen Smith had eight points, five rebounds, five steals, and five blocked shots. at Springville Girls
Hayden 44, Springville 25

Hayden got five points from Dalton Worley and three from Derek Brecht.