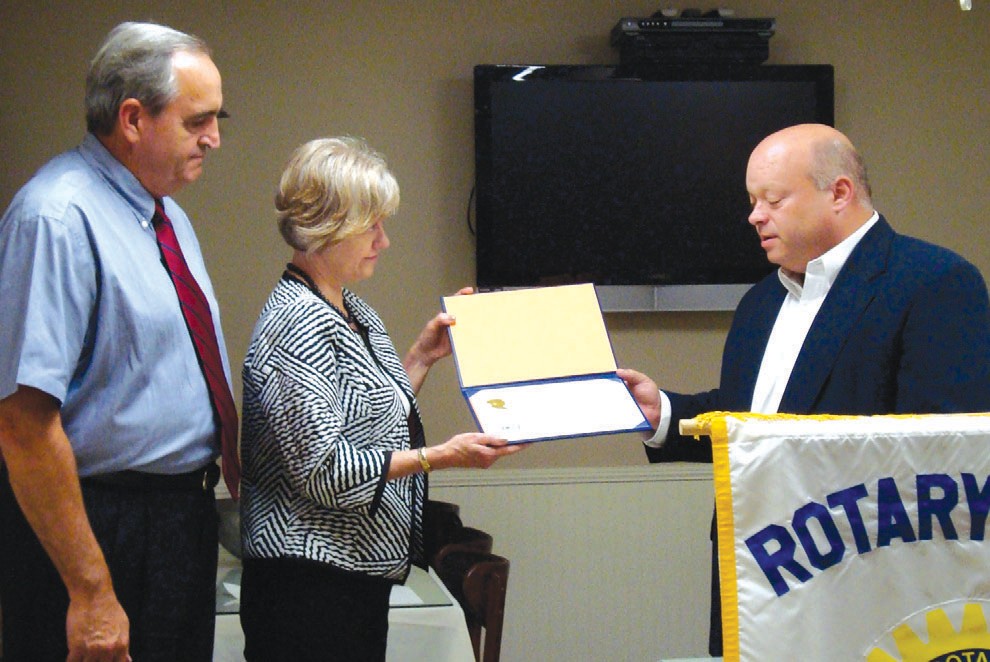 The Rotary Club of Oneonta gave a special presentation honoring the late Charles Carr Monday at its weekly meeting.

The club paid tribute to Carr’s memory by naming him a Paul Harris Fellow. Carr’s wife Brenda Carr and brother Jim Carr were there to accept the award.

“Charles Carr led a life that was an example to all of us, and his work to improve this community is unmatched. In the words of his longtime friend L.G. ‘Bud’ Jones, he was ‘dedicated to serving the least, the last, and the lost.’ The Rotary Club wanted to honor Charles, and there is no higher honor in Rotary than the Paul Harris Fellowship,” said John Bullard, Rotary president.

Carr, a member of Rotary for many years, was executive director of the Blount County-Oneonta Chamber of Commerce at the time of his death in December 2010. He began his career as a teacher in the Blount County public school system before serving on the staffs and cabinets for governors George Wallace and Guy Hunt. Carr also worked as the director of governmental relations at the Alabama State Department of Postsecondary Education.

He served on the boards of Superior Bank of Oneonta, St. Vincent’s Blount, and Hope House.

His wife said the job he loved the most was that of executive director for the Blount County-Oneonta Chamber of Commerce.

“He loved the job and he loved the people,” said Brenda Carr. She also said how greatly she appreciated the presentation.

“Our son Jonathan Carr and I are grateful for the Rotary Club to recognize Charles this way. It’s always quite an honor to be recognized by your peers, and Charles had a great respect for his fellow Rotarians and loved the fellowship of the Rotary Club,” said Mrs. Carr.

Rotary International is a worldwide organization boasting more than 1.2 million professional business and community leaders as members. The organization helps build peace and kindness in the world, offers humanitarian service, and encourages high moral standards in all vocations.