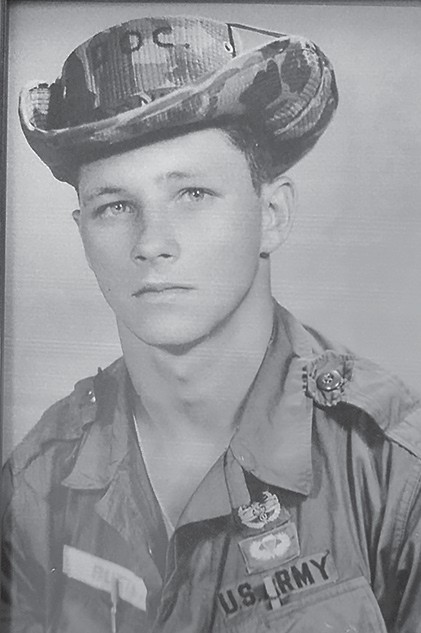 Who was Lonnie Rural Butts? That’s the question I asked myself when I received an email from a Texas gentleman, Hank Ortega, seeking assistance with what I came to discover was a personal mission to have Butts recognized with a memorial at the U.S. Army’s Fort Sam Houston in Texas. That base is where all military medical personnel receive their training and it houses a museum that honors those who have distinguished themselves.

Butts was in the U.S. Army, a Specialist Fifth Class and a team medic in what is known as the Tiger Force, a recon outfit of 1st Battalion, 327th Infantry Regiment in the 101st Airborne Division. Going forward, I will not refer to him as Butts or Lonnie, but rather as SP 5 Butts. He deserves that respect.

SP 5 Butts served in Vietnam, and for his service was awarded the Distinguished Service Cross, the second highest military award, the Medal of Honor being the highest. He was also awarded Parachutist Wings, the Combat Medical Badge, the Bronze Star, and a Purple Heart Medal. SP 5 Butts’ DSC commendation reads in part, “For extraordinary heroism with an armed hostile force.” When part of his unit was pinned down by machine gun fire, he flanked the gun emplacement and “silenced the two Viet Cong who were manning it.” (Although a medic, SP 5 Butts was first and foremost a paratrooper.) He continued moving forward from one emplacement to another, driving the “enemy back with hand grenades and machine gun fire.” When an enemy’s grenade landed between him and his platoon sergeant, “he threw himself between the sergeant and the grenade, catching most of the shrapnel in his legs.” Despite being wounded, SP 5 Butts attended to the wounds of a comrade and refused aid himself “until all the other wounded men were treated.”

Another young American soldier there was SP 4 Arthur C. L’Hommedieu, also a medic. He was awarded the Silver Star for his actions that day. He was treating the wounded and moving them to evacuation helicopters. He was with SP 5 Butts at one point. SP 5 Butts was “propped up against a tree and another wounded Tiger was with him.” SP 4 L’Hommedieu said he wanted to treat SP 5 Butts first and move him to the medivac site, but SP 5 Butts ordered him to take the other soldier instead. As he did so, the Viet Cong attacked again with mortars. SP 5 Butts received more wounds and was killed.

SP 5 Butts was more than a soldier. He was the son of Roy Felton Butts and Avil Phillips Butts of Allgood. Roy died when SP 5 Butts was young and his mother remarried Jake Hand who became a good father to all her children, as well as his own. SP 5 Butts was a sibling to Henry Frank and Tonney Butts (both of whom also served in Vietnam), Mary Jo Butts Taylor, Trenton Butts, Perry Butts, Sharon Hand Hartley, Kathy Hand Sellers, Allen Hand, and Jody Hand. Looking through the paper’s archives I discovered he was a Boy Scout, an athlete, and a member of Allgood Baptist Church.

Locust Fork High School football provided an early glimpse into SP 5 Butts’ integrity. His sister, Mary Jo, recalls he had to miss a practice to help a family member get in a crop. The team rules required a player to be benched for the next game if they missed a practice, and even though the teenage Butts was a starter, the coach made him sit out. Instead of sulking, the young Butts helped coach his replacement throughout the game.

In the weeks since I first spoke with him, Ortega, a medic who later served in Vietnam in the same Tiger unit, has been successful in convincing the museum at Fort Sam Houston to install an appropriate display to honor SP 5 Butts. Locally, there are markers for him and the other 19 at a memorial in Oneonta. The names SP 5 Butts and Marine Lance Corporal Michael D. Long are also on a plaque in front of the Allgood fire hall. Doesn’t seem like enough. Not nearly enough for any of them.

As for me, I’m back to my original question. Who was Lonnie Rural Butts? No one can be sure of the person he would have become had he lived, but we should all try to live up to being the person he was when he died. SP 5 Butts was a man I wish I could meet today and say to him what we should say to all veterans of that war, “Welcome home.”