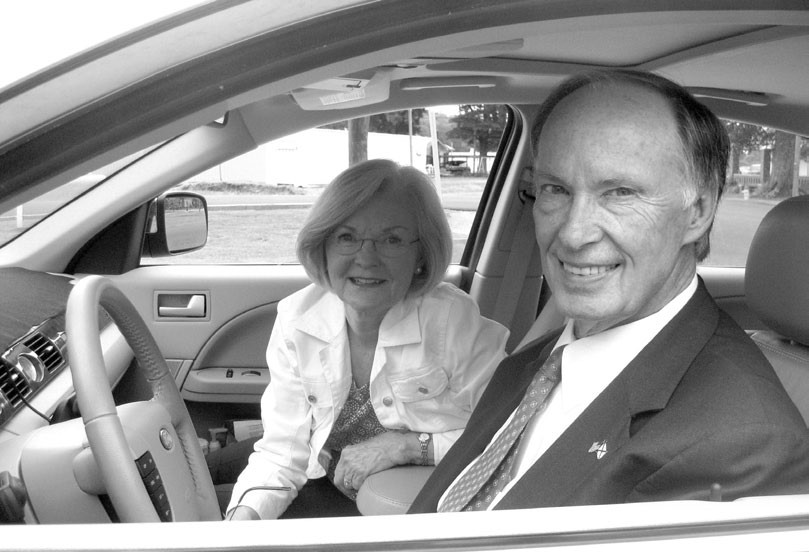 Robert Bentley and his wife Dianne have been barnstorming the state since he announced his candidacy for governor on May 13, averaging over 5000 miles a month since then. How does she like the campaign trail? It’s great for her crocheting, she told The Blount Countian after her husband’s marathon two-hour interview.

Dr. Robert Bentley, 66, is a two-term state representative and recently retired dermatologist from Tuscaloosa who’s running for governor in a field of six Republicans.


He addressed the Blount County Farmers Federation last week, stopping at The Blount Countian
beforehand to talk about the governor’s race.

He’s not among the leaders in name recognition, but he’s comfortable being a dark horse. “When have you ever heard of a white horse winning the Kentucky Derby?” he asks. He handicaps the race as he sees it: Roy Moore, front runner, with Tim James a close second; himself and Bradley Byrne in a dead heat for third and fourth place, with Kay Ivey and Bill Johnson trailing the pack.

“If I didn’t think I can win, I wouldn’t waste a year of my life in the effort. I’m the most qualified candidate of those running. I’ve served two terms in the state Legislature and I know how legislators think and work. The governor’s got to be able to work with the Legislature. I’ve helped write the budget for the last seven years. I’m qualified to make the decisions and tradeoffs involved due to my knowledge of the budget process,” he said.

Born and raised in Columbiana, attended Shelby County High School. Top student in class, played baseball, football, and participated in debate team that won state championship in 1961. Attended University of Alabama, majoring in chemistry and biology, graduating in three years. Attended University of Alabama medical school, graduating in 1968. General medical office in Air Force during Vietnam conflict. Founded Alabama Dermatology Associates, becoming largest dermatology practice in southeast. Elected to state House of Representatives in 2002 and re-elected without opposition in 2006. Active in First Baptist Church of Tuscaloosa, serving as chairman of deacons four times, among other offices. Member of board of trustees of Alabama Medical Education Consortium, which he helped found, among other board positions. Married to Dianne, with four sons; four granddaughters.

His leading message points as a candidate? There are three:

•Economic development “With unemployment at over 10 percent, I want to stimulate business, particularly existing business and small business which accounts for much new job creation. I will set up a cabinet level position for small and existing business development, providing them with the same tax breaks and incentives that we provide for large business like Mercedes that we go out and recruit. I’d provide special incentives for retraining and rehiring workers in order to get unemployeed workers back into the work force.”

•Education “I want to look at pilot programs to see what works. I’d develop a pilot program to look at compensating teachers with performance based bonuses.” Would the Alabama Education Association oppose such a pay plan? “Well, they might, but if the results of the pilot program show that it works, they’d have a hard time making it stick.” (Though not discussed in the interview, other education proposals appearing on Bentley’s website include new afterschool tutoring for grades K-12, funding to assure access to fine arts courses for every school in the state, and programs aimed at students who are at risk for dropping out.)

•Health care “I’d introduce health care savings accounts – tax free accounts like IRAs. They’d have a deductible, but people would have access to those funds to use as they saw fit in making their own health care choices. Michigan saved $194 million on the cost of its health insurance by converting to health care savings accounts. I would like to put teachers and state employees on health savings accounts. Alabama could save at least $100 million. I’d also set up a state Health Care Service Corps to increase the number of primary care physicians serving the state. We’d reserve 25 percent of the medical school seats each year and provide scholarships of $30,000 a year to qualified recipients. When they finish medical school, they would be required to serve four years in an under-served part of the state. We’d gain 100 primary care doctors a year with the program.”

Blount County roads are deteriorating steadily, and there’s no prospect of local funding. Would you support a state bond issue that would allow counties to avail themselves of grants from state funds on a reasonable matching basis to prevent the deterioration of infrastructure?

Bentley: “I’m not aware of that proposal, but I like that approach. I like it being available on an optional basis to counties that need it. I really want to help rural areas of the state, and I know that infrastructure is a priority in those counties. I’d be in favor of it, yes. “

The state parks division is considering closing or curtailing the operation of a number of unprofitable state parks, including Rickwood Caverns in western Blount County. A local nonprofit group has worked to keep it open by creating a three-way partnership between the nonprofit, the county commission, and the state parks department. So far, the out- come is still in doubt. Would you support such an effort as governor and try to keep the park open?

Bentley responded to a number of other issues in the wide-ranging interview. His answers appear below, sometimes as quotes, sometimes as summaries of his answers, occasionally as responses taken from his website.

What would you do about the Prepaid Affordable College Tuition (PACT) program failure?

Bentley: “We need to live up to the commitment – express or implied – that the tuition would be paid for participants. First, we should close it to new investors. Then, freeze tuition at all state universities, but do it in such a way that they get the money back on a delayed basis.” Bentley said that would be done by investing the remaining PACT proceeds in an insurance program that would pay back a set amount as an annual annuity. In the early years of the program, while there are still many participants in the pipeline, the amount of the annuity would have to be supplemented by other funds. In later years, as the number of students decrease, the annuity would cover, and in the final years exceed, the cost of tuition for the remaining participants. The amount in excess would then be rebated to universities for the tuition breaks granted, thus making up the amount the institution lost by holding tuition constant for those students. “That’s a plan,” Bentley said. “Nobody else has even proposed a plan. And it’ll work. I’ve consulted with five of the leading insurance companies in the country to develop it. “

Bentley: “PACs are not a problem in themselves. It’s when the money is passed from one to another of them and you can’t tell where it came from. In the time I’ve been in the Legislature I have always voted to ban transfers.”

Bentley: “I voted in favor of removing the sales tax last year, but I voted against it this year. This year, the federal government was adding a tax increase on the same people who would’ve been required to make up the difference on the loss of state revenues from the grocery tax. It wasn’t fair to hit them with a double whammy like that, and it also hurt small business as well.”

Bentley: “If I’m elected governor, I’ll move appraisals back to every four years – at the stroke of a pen, just like Governor Riley wrote it in.

Bentley: “I have opposed all legislation that allows gambling and will continue to do so. I believe ultimately the people of Alabama need to decide this issue at the ballot box. If they choose to allow it, I’d want it under the strict control of a Gaming Commission, and I’d want a tax of at least 40 percent on the profits. If they reject it, we must not allow another vote by the Legislature or the people for at least 10 years.”

Where do you stand on federal fiscal policy since 2009 – the bailouts, stimulus package, regulatory policy, and so on?

Bentley: “We are absolutely going wrong all the way (at the federal level.) You can’t stimulate the economy by spending and raising taxes. We need to do just the opposite – cut taxes on business and on capital gains. Cutting taxes would stimulate the economy and the effect would be immediate – within six months or less. I was against the bailouts. We don’t need to bail out companies that are about to fail. If a company can’t deal with the rigors of the marketplace and the economic situation, they ought to fail. As to regulation of the financial sector of the economy, I see regulation as being like a pendulum. It swings one way toward too little regulation and greed takes over. That’s what happened recently. Then it’ll swing in the opposite direction and probably swing too far. It needs to stabilize near the middle.”